Rumors of me running off to the Bahamas and becoming a steel-drum player with dreadlocks and a jet-ski named “Jimbo” are vastly erroneous. (mostly because I’m planning that for NEXT year)

However, that’s probably not why you’re here. You’re here to hear (‘here to hear’ sounds like an Olivia Newton John song) about the amazing new “VCSp Special Edition”!

I was persuaded by someone to build them a VCSp, and since I hadn’t built one in a while, I thought “heck, why not design it! from scratch”

SO! Without much further ado about nothing, here we go!

Well, first of all, this unit is a bit thinner than past endeavors. It’s actually made from 2 slabs, boards, whatever you call them, of oak. Each slab was 3/4″ thick, and one slab was planed down to 5/8″ thick, thus, the unit is a little under 1.5″ thick. Whereas before most of my units were 2″ thick. You can see the ON/OFF switch and the A/V out jack in this photo.

The unit was sanded and coated with polyurethane. 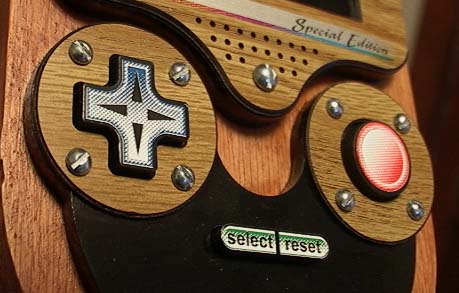 That missing space has to go somewhere, (just ask Einstein) and since I used a somewhat component-laden 3″ screen on this thing (as opposed to the 2.5″ on the Rev 5) I had to free up some space inside the unit. Obviously the best way to do this is to create raised portions on the device and make them look like design features (trade secret there, that’ll be 50 bucks please).

Here you can see the .188″ high raised thing the controls are on. Here’s a secret, this unit, ESPECIALLY the design of the paddle/paddle trigger, are taken directly from my mysterious, incredibly delayed “Vagabond” project. (though this unit isn’t as small as Vagabond would have been.)

Oh, yeah, the raised thing with the controls. The tactile pushbuttons switches for the controls are actually above the surface of the case, however, covered by this black raised thing! Who would have guessed? Then, to hold the buttons in place, high-quality fake plastic wood grain circles are screwed on top.

A matter of clarification on the exact definition of “high-quality fake plastic wood grain”. The Rev 5’s used crappy wooden paneling, with printed wood-grain on top. Kind of like cheap furniture or a trailer house wall. This unit has the kind of better fake wood grain you see in like a Oldsmobile or something. OK!

Ah! Here’s where the Vagabond roots (that’s an oxymoron if I’ve ever heard one) show through! Gripping around the unit, you use you left index or middle finger (depending on overall hand-size) to press the red “Paddle trigger” and your right hand to control the paddle knob. This gives a feel most like an original paddle controller, without sacrificing the symmetry or overall awesome-ness of the design. 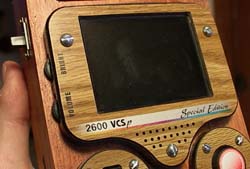 Once again, I used 2 white LED’s to light the 3″ Casio screen. This saves power and also frees up space inside the unit. I ran out of places to put the speaker so I drilled a bunch of holes around the lower screen screw and a ways under that is the speaker. It’s quite loud, again, to ask the question “what is the Gameboy Advance’s problem?” 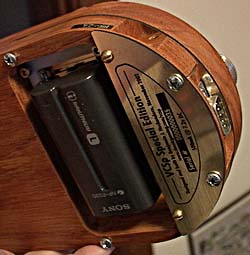 Last but not least the bottom of the unit. Standard-issue Sony Infolithium battery with clip. Some of the past clip-type battery holders were a bit ‘loose’ so this one is tighter than… well, it’s tight. You can see the recessed second-player joystick port in this shot, along with the gold bottom plate.

Please feel free to browse the site and view the other designs & units I have designed. Have fun!