Holy cow on a popsicle stick I had a tough time making this thing!

(Which is why, no matter how many times you email, I WILL NOT BUILD ANY MORE)

I kind of regret digging out my old N64 and thinking “Hm, should take a look inside this puppy” Had I but known! Oh well. Here now are the facts of the amazing tale, along with photos. Enjoy! 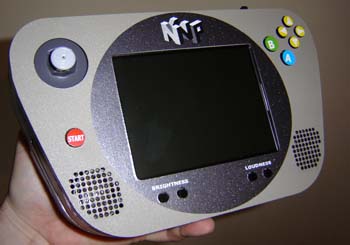 I then made some aluminum brackets and mounted the cartridge slot to the bottom of the motherboard as shown below. 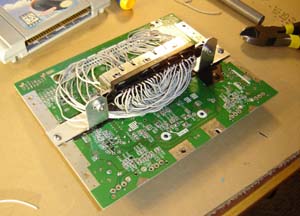 Little did I know that this would be the EASIEST part of wiring the N64 portable! 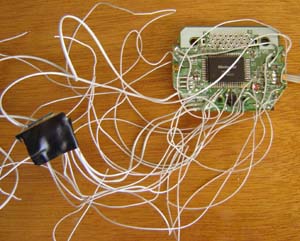 This is (what’s left) of an N64 controller. After tracing which buttons went to which pins on the black IC (center of board piece) I chopped most of the board off and did a little rewiring (mostly ground/VCC) to make it work again. I then wired an extension plug for the analog stick (left thing with electric tape)

I then designed the portable using trusty old AI (the program, not the Steven Spielberg movie) I had a battery pack laying around that was first intended for the DreamcastAway, then the PS2p, then… the closet. I figured the thing cost me $40 so I should use it for SOMETHING! 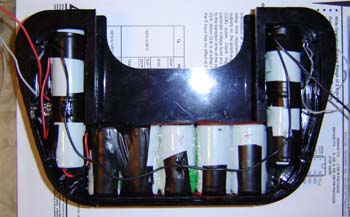 Here’s the batteries packed into the rear half of the unit, which is basically all batteries and the cartridge. The pack was really a bunch of Ni-MH “C” sized cells, but that allowed me to chop it up and move them around in the case as I saw fit. (and so they would fit)

Here’s the front (parts side) of the N64 motherboard, mounted on the match plate with the stuff installed: 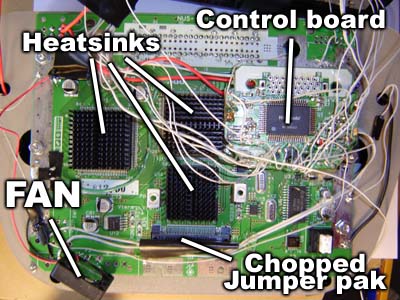 As with most of my portables there’s a front and rear half to the unit. Here they are laid side by side: 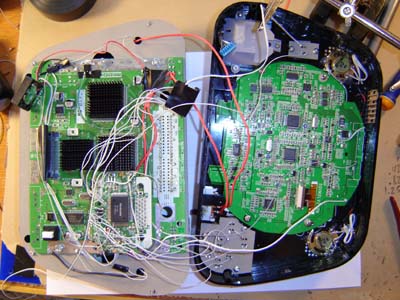 It has the usual PSone 5″ screen, stereo speakers (not the original PSone screen speaker however) and the tact switch button boards. Folded together there’s actually a good deal of empty space in the front of the unit – this was required for the jumper pak and the heat sinks on the chips. Rubber fender washers (this disc-shaped things from the hardware store) were placed above the heatsinks so the back of the PSone screen would press against them and hold them down onto the chips.

Here’s where I placed the shoulder buttons. There’s an indent for your fingers then a long button (that had to be specially designed to flank the batteries and click a tact switch on the sides) You can also see the charge jack. The L button seems to be AWOL in this design… I can’t remember ever actually USING it during a game so I don’t miss it. The D-pad has taken a hike as well. 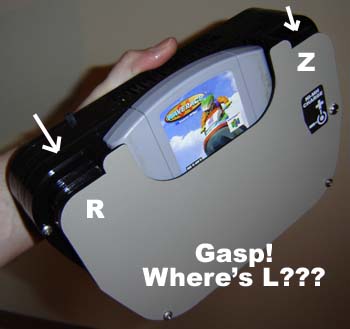 The portable running Wave Race, which was a pretty fun game if you recall. (Plus it had 100 kmPH dolphins in it!) I actually bought this game when I was storyboarding Port Washington so I could play it and have a “jet ski” reference for the end sequence of the movie. 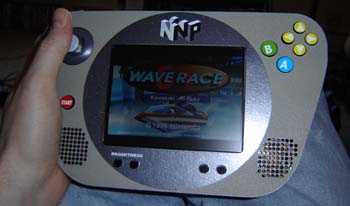 The final unit measures 9″ x 5.5″ x 2.5″… making it one of the meatier units I’ve built. Oh well, at least the cartridge slides down the back.

But enough of this stuff! I know what you’re REALLY waiting for… yes, that’s right:

“One shall stand… One shall fall.” – Optimus Prime, from Transformers The Movie

It’s time for everyone’s favorite yearly feature in which I compare the latest Gameboy to one of my portable creations! (Nintendo is kind enough to release a new model Gameboy every year, making this annual feature possible)

Since the DS appears to be roughly the same as a Nintendo 64 (but with blockier-looking textures and of course DUAL SCREENS) I figured this would be a good match! We’ll go by categories and see who comes out on top!

Upon boot-up, has you “Tap Screen” after reading a health warning before you can play?
N64p: NO
Nintendo DS: YES 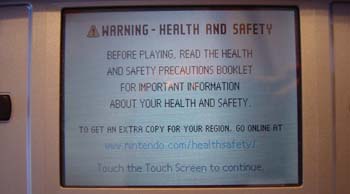 Ok, I’m all for safety and not getting run over by cars / hit by asteroids, but a “tap screen to continue” health warning on a pocket game system??? That’s just ridiculous – not to mention bothersome! What if similar things were on other electronic devices… 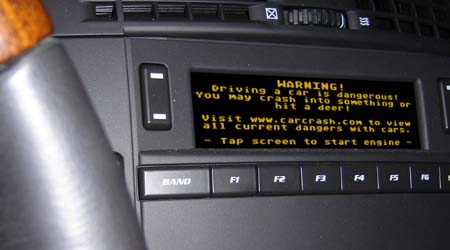 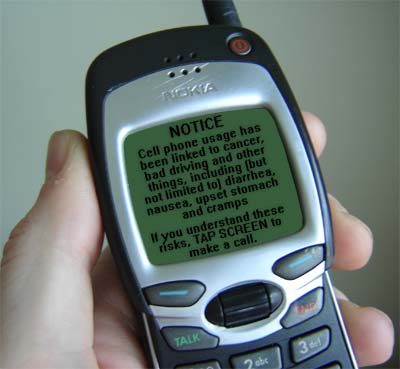 The sheer loss of accumulated productivity would cripple the nation! (Not the mention cause a lot of “tapping” to go on)

Has new “re-mixed” versions of games you already bought 8 years ago?
N64p: NO
Nintendo DS: YES

Yes, sadly enough your existing library of games will work perfectly fine with the N64p. (Well, the ones not requiring the expansion pak at least) But if you really hate money feel free to buy them all over again (along with Mario Party 64 – as in the 64th game) for the DS. I’m detecting a pattern…

By this logic the next Gameboy (coming this Christmas I’m sure) will allow you to buy all your existing Gamecube games all over again, but now on 2.5″ discs!

Has a built-in calendar and a screen asking you to select which game to play?
N64p: NO
Nintendo DS: YES 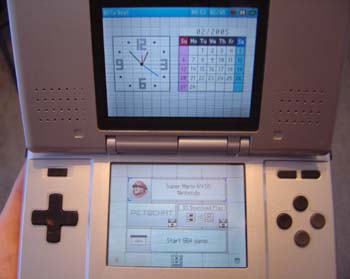 Likely press release about these features:

(For immediate release): “The Nintendo DS has some great new features people are gonna go nuts for! First there’s a clock – not just some numbers but an actual emulation of one of those old “dial” clocks you may have seen in the movies or your Grandma’s house. If that’s not enough a full-function calendar sits next to it. Think of the possibilities! When you’re writing a check out to buy the latest re-release of an N64 game for your DS you can avoid the embarrassment of asking the clerk the date altogether!  Simply whip out your DS, power it up, tap the screen to acknowledge you accept the danger, then check the clock! Not only will you know the date but you’ll look uber-cool doing it! (Or so our research suggests)”

“The fun doesn’t stop there however! No siree-bub! On the OTHER screen (remember it has two!) is a display that lets you select which cartridge slot you’d like to play from. This allows you to keep 2 re-releases of old games in your DS at the same time – saving you time but not money! There’s also a Picto chat thing so you can wirelessly chat with other DS users in study hall / business meeting / airplanes. (Ok, maybe not that last one)”

“Another special feature of the DS is its ability to require a restart after you do anything. Once reserved only for Microsoft Windows, the DS outdoes that OS in spades!”

Unlike the N64 version (which was obviously a piece ‘o crap without this feature) you can touch Mario (or that dinosaur thing) and distort their face like a monochromatic Picasso. Wow.

Can be played in a cave?
N64p: YES
Nintendo DS: YES

INT: LABORATORY 15, in the depths of Nintendo’s R&D department. Daytime

TOP NINTENDO SCIENTIST 1
We must make this year’s Gameboy playable in caves!

TOP NINTENDO SCIENTIST 1
So it will get a good review on Ben’s site, naturally!

TOP NINTENDO SCIENTIST 2
Ah, that is important. But… how?

TOP NINTENDO SCIENTIST 1
Well, one backlit screen would light up the cave a little, right?

TOP NINTENDO SCIENTIST 1
So what if the system had TWO screens?

The dual screens made it seem safe, so I ventured forth into a case with a DS and my N64p… 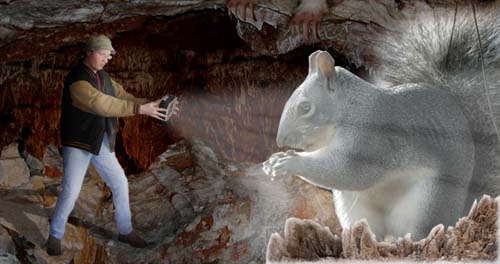 Whoah! That was close! The N64p’s screen lit up enough of the cave to reveal a vicious Gorinthian Cave Beast that was ready to pounce and eat me! Time to see what the DS reveals… 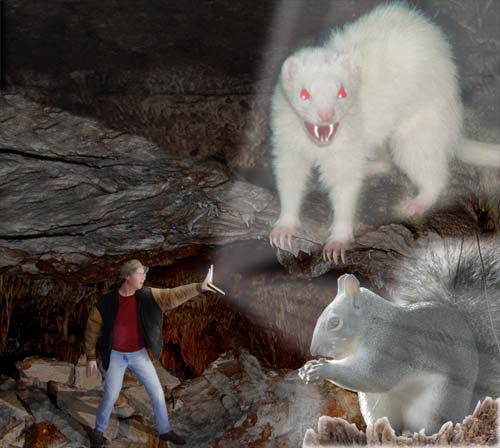 Yah!!! Good heavens! An inverted mutant double-fanged sloth-beast! Good thing that second screen was there to light this up for me! Wow, imagine what I could find with 3 screens!

Nintendo rep: “You’ll have to wait until 4th Quarter ’05 for that one.”

So there you have it! Both systems have their ups and downs, but if you’re venturing into a cave the Nintendo DS is the best choice. If you’re into the classic N64 games, then the N64p is for you!