Â  It’s June 2001, and a new game portable game system is being sold, and it’s on everybody’s lips. But, what’s this? Some new upstart called ‘Nintendo’ has entered the arena? It looks as if they’re selling something called a ‘Gameboy Advance’ (GBA) to compete with the world-renowned VCSp. Well! As the creator of the VCSp, I thought it would be appropriate to give you, my loyal fans, a fair comparison of the two different units. So, without any further ado, I give you… VCSp VS GBA!

Â  Now, you might think that the VCSp is a cumbersome device next to the skinny GBA. And you’d be partially right. But, the thing to ponder is this: What if you were carrying your GBA in your pocket, and then forgot it was there WHEN YOU WASHED YOUR PANTS???? Surely the unit would be destroyed by tough, stain-fighting detergents. Now, with the VCSp, there is no chance in heck that you will leave it in your pants pocket because IT WON’T FIT THERE THE FIRST PLACE! So, if you do buy a GBA just remember… Each day you do laundry may be its last!

Â  Also be sure to note, that carrying around the significantly heavier VCSp will give you more exercise and provide better cardiovascular stimulation in the long run!

Â  Another thing to think about… Sure, the VCSp is a good deal heavier than a GBA. But what if you were Indiana Jones, famed archaeologist and… how does one say it… ‘obtainer of rare antiquities?’ 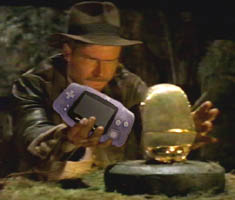 Ok, above you see Dr. Jones trying to take the Golden Idol from a temple in South America. And he’s gonna try to fool the weight-triggered booby trap by setting a GBA on there instead. LIKE THAT’S GONNA WORK ! 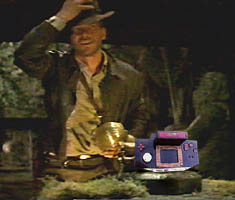 Now, in this shot, you can see that Indy wised up and used the heavier VCSp instead. Obviously the cave will not crumble apart and roll boulders after him now!

Â  Alright, so the GBA is a bit faster than the VCSp… But the VCSp is really not much slower than the original Nintendo, and we all enjoyed that, didn’t we? Right? Also, does the GBA play all the classic Atari games you know and love? Besides, with all the extreme-lithographic holo-gram scaled neuro-net processor chips coming out, 33 MHZ seems pretty slow itself!

Â  Frogger. Pitfall. Pitfall II. Solaris. Keystone Kapers. Joust. Missile Command. Pac Man Jr. Dig Dug. Pole Position. Journey The Escape. Centipede. All the great games we remember from the heyday of they 2600. With the VCSp you can play them once again, in all their original glory. No fakey emulation here, folks. This is the real deal. But without those lame RF TV switches!

Â  If you want ‘retro gaming’ with the GBA, you’ll have to settle for the usual titles that are re-released more often than a Star Wars movie. However, there is a cartridge coming out called “Atari 2600 B-Sides” which promises to bring back some of the obscure games.

Â  HA! This is the part where the GBA is sent home to mama. The GBA is pretty cool and all, but you basically have to set up an array of mirrors, wait for the planets to align, then stand at a 45 degree angle on the Equator while holding a flashlight TO GET A GOOD VIEW OF THE SCREEN! Even though the infamous ‘blurring’ problem has been gone since the Gameboy Color, I actually think the newer style Gameboy screens are harder to see than the original 1989 version.

With the VCSp, it has a backlit screen, giving you a nice, bright full-color view, even in a cave! 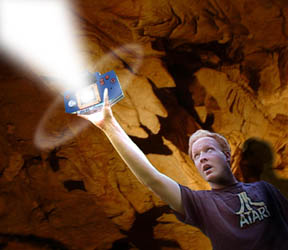 Â Â  Me in a cave with my VCSp 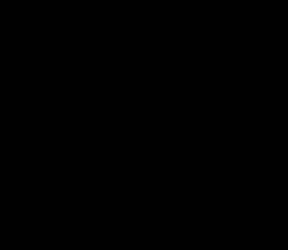 Â  In my opinion, it’d be worth the extra batteries to play the thing in the dark. In my opinion, the GBA not being backlit was like the N64 not being CD-ROM (and I say that even though I’m one of the last seven surviving N64 fans). Couldn’t it have a photo-eye backlight that only turns on when it’s dark? (like an iPaq) Is that really too much to ask? Mark my words, Nintendo, once I find the right kind of whacked-out screwdriver to open my GBA, I am gonna stick a backlight in there!

Â  Another useful implementation for a VCSp and its backlit screen is game play in California. Let’s say you’re at work and all of a sudden the power goes off. Well, with a GBA you’d be in the dark and couldn’t even pass the blackout time playing it (unless you work outside, but, that doesn’t support my illustration so never mind). BUT! If you have a VCSp, you could not only play it in the dark, but use it as a light to find co-workers who may have fallen into mineshafts or behind the copier. Ironically, almost half of the VCSp’s I have sold have gone to California. COINCIDENCE?

Â  Also, don’t forget that the VCSp has a Audio/Video OUT jack that allows you to play the system on a modern television! That’s a feature Nintendo would never put in! (well, without making you buy some other product, that is…)

Um… ok, so the VCSp doesn’t do so well in this category. But, um, it has a backlit screen! Future models of VCSp’s should have better power conservation, unlike Nintendo I can’t afford to hire expert engineers. So, if long, cheap battery life is your thing, you’ll have to go Gameboy. If you don’t mind buying rechargeable camera batteries, then the VCSp is for you.

Take note, the VCSp does have a plug where you can insert an old Atari wall power supply to avoid using batteries.

Both systems have their advantages. Personally I own 3 different Game Boys (always keep one in the car’s glove box – just in case). The GBA is a great system that will be very well supported and probably have the best portable games ever. And at the same time, it could help resuscitate the dying (dead?) genre of 2D games with titles such as Castlevania: Circle of the Moon. We can only hope for Contra Advance.

As for the VCSp, it’s probably the best way to play your favorite old Atari 2600 games. Emulators are not quite perfect, you can’t beat the real thing. And with a crisp video out and second player joystick port (that takes all standard Atari joysticks) you can practically turn it into a home system! Future editions of the VCSp will take this flexibility even further, and hopefully I can get production going faster, although they are still easier to get than a PS2 was last Christmas! I also hope to get the price down.

So, I leave the choice to you! With all the facts in hand, what will YOU save your money for this Christmas season?