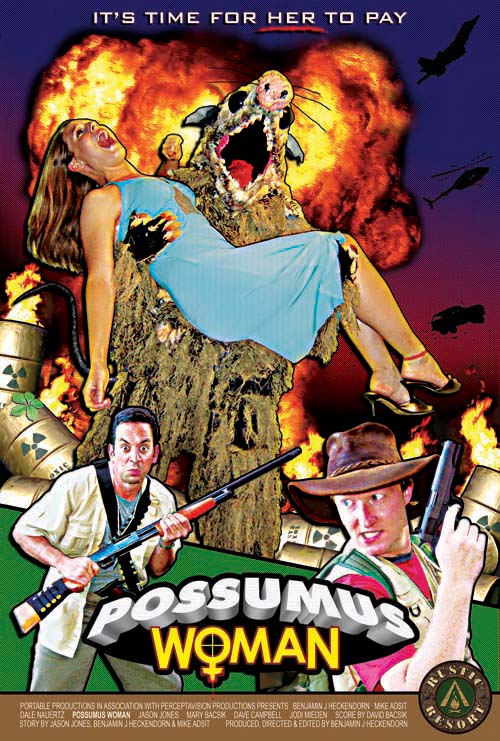 None of this actually happens in the movie but I don’t care. Click here for full-size, printable version.

Yes that’s correct – unlike all of my other movies Possumus Woman is being done in a timely fashion! Editing is complete, there are only a couple of special effects left to do (already in progress), and all I really have left is sound editing, which I plan to do over the next few weekends.

As with Port Washington the plan is to have a “web premiere” allowing persons to download the movie for free on the release date, in a variety of formats including iPod video and hi-def Quicktime/WMV. Think of it as an expensive YouTube video – I just did it for fun, as a hobby, but want to share it with the world. It was a fun break from the daily “portables” grind.

We also plan to have some local showings in the south central Wisconsin area, likely in early November. Jason Jones is in charge of those so more details as they become available.

Just a quick note, since it’s just taking up space I’m selling my old PS2. Check it out!

All proceeds go towards the “Ben’s Basement is a Little Bit Cleaner” Foundation, a for-profit organization that helps exactly one person throughout the world since 1975. 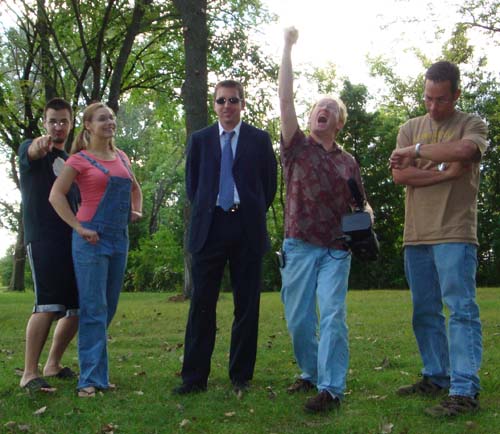 After getting the final shot of the movie, this completely candid photo was taken.

This last weekend we filmed the remaining bits of Possumus Man 2: Possumus Woman. Specifically a lot of fire effects and a few closing moments for the characters.

In a drastic turn from Port Washington, we shot this movie in 2 months and 3 weeks (having started on June 14th). For more final weekend photos and some “Possum Movie Facts”, check the rest of the article.

Release date to be announced soon. More than likely I won’t make a trailer due to time constraints, would rather just finish editing the movie.

END_OF_DOCUMENT_TOKEN_TO_BE_REPLACED

We’re back at last! In this episode we talk about the reason for the dearth of podcasts lately, namely the filming of Possumus Man 2: Possumus Woman (drinking game: swig every time Jones reminds me to simply call it “Possumus Woman”)

Includes some sneak-peak (or rather sneak-listen) insight into the process and commentary on indy filmmaking in general. We also discuss Xbox Live Achievements, which games are super-stingy with them, which are ridiculously easy and those that simply dole them out as you go along without requiring any magical super-jumping abilities.

Finally we talk about Braid, which, while a bit pricey (kind of like my products) is still worth checking out on Xbox Live Arcade.

Enjoy, and hopefully we’ll get back to having intros again soon!

Just so people realize my site is indeed still live and active, check out this gallery of PM2 stills. You can click on them for full-resolution versions, suitable for framing!

The movie is about 72% filmed at this point and we hope to finish up shooting by the end of August. In other news, there are some cool things going on which of course I’ll talk about on this site once I am able.

Click below to bring up the gallery, and stay tuned!

END_OF_DOCUMENT_TOKEN_TO_BE_REPLACED

Long ago, before I was an internet celebrity, my hobby was independent filmmaking, with some modding on the side. Then of course the modding hobby took over my life and became my job, while other hobbies faded away… As of 2008 it’s been 6 years since we’ve done a movie – which might not sound like a lot but in the old days the biggest gap between our indy productions was maybe 11 months. 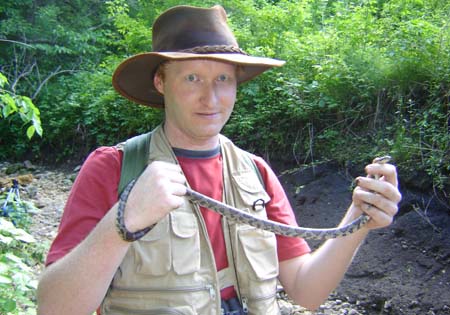 This snake slithered onto our filming location so I put it in the movie. Hopefully it’s not SAG because I didn’t pay it…

Not content with this state of affairs I set out to make a movie this summer, dammit. On a couple occasions we’ve almost made a sequel to our “amazing” 1995 effort Possumus Man and I decided this time we’d actually do it. Also it’s somewhat easy to film, compared to say Port Washington, as it takes place mostly in the woods. We’re shooting in hi-def using the Panasonic P2 camera – no more manual tape capture! 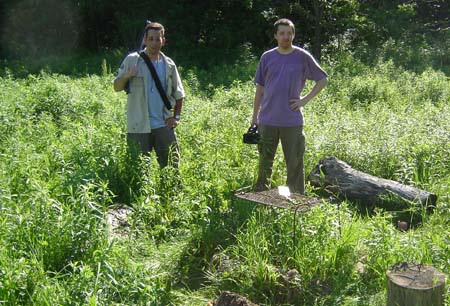 Mike Adsit and Jason Jones standing by a campsite where a horrific battle is about to ensue. Mike co-stars in this movie, while Jones thus far is mostly cameraman. Hi-def requires more emphasis on good focus, and he’s doing a bang-up job.

We started filming this last weekend and expect to continue about every other weekend this summer. Locations are mostly south central Wisconsin, though we may also do some shots up north around the Rice Lake / Birchwood area.

For up-to-date info, or to just check out another Benheck blog, visit The Official Possumus Man 2 blog.