In this section you can watch videos of the game in action, as well as descriptions of each of the modes. Grab some popcorn and a $3 box of Junior Mints and enjoy…

Demonstration of a normal game of Bill Paxton Pinball.

Demonstration from a different angle.

Myself playing the pinball, whilst wearing a hat. Includes discussion on the length of special edition James Cameron movies and a really bad impression of Julie Delpy from Before Sunrise, or After Sunset, or whichever one they played pinball in.

2 player mode REMATCH! The machine supports up to 4 players and displays the winning score at the end. It also saves the overall high score in EEPROM. Average really good scores on this machine – thus far – have been around 60 million. There is no “rollover protection” (kind of like a Suzuki Samurai) after 999,999,999 so you could – in theory –  have a “kill screen coming up, guys.”

The following are mode demonstrations with the sound turned down so I can describe them.

Apollo 13. I only discovered there actually WAS an Apollo 13 machine after I finished the board. Oh well, at least I avoided Twister. You see, there was a Twister machine as well, kind of like a Bill Paxton Pinball prototype, if you will, so I didn’t want too much Twister stuff on this board, if at all. But I like space, so Apollo 13 won’t stick in my craw too much.

Dale came up with the idea for Near Dark mode the day before Katheryn Bigelow (director of Near Dark AND The Hurt Locker) won her Oscar.

The left return lane is festooned with images from 1994’s spy romp True Lies, in which Bill Paxton played a sleezy used car salesman trying to score with Arnold Schwarzenegger’s wife (bad idea). However, since this game is from Paxton’s point of view, the object is indeed to get with Jamie Lee Curtis. I really wish I could have somehow incorporated the part where they clink together plastic wine glasses, but it was not to be. Maybe with a better display…

A Simple Plan was a well done – if dreary – movie and I decided its tale of moral consequences would lend itself to a “Wheel ‘O Fate” on the board. Shoot the right ramp (when U-571 is not active) and you see a plane crash, followed by the ball spinning the wheel. The system determines what you landed on via a photo-sensor which looks at a gray scale on the bottom of the wheel which is aligned to the “prizes” on top.

If you clear all 4 drop targets with no modes active Aliens mode starts. The premise is simple – clear the drop targets again before the automatic sentry guns run out of bullets. If successful, the bullets remaining form your score. Not only is this one of Bill Paxton’s best-known roles but it gave me an excuse to put my favorite actress Signorney Weaver on the playfield. She’s so awesome.

The wrecked Titanic was actually the first “toy” I made for the machine. I painted while on a trip up north, the very same one where I discovered microwave pork rinds. The concept is the ball can randomly exit the Titanic maze via 1 of the 3 holes. 2 of the holes light 1 diamond segment, while exiting via the middle hole gets you 2 segments. Light all 5 sections of the “Heart of the Ocean” and you win! And yes, Celine Dion music plays.

While U-571 is a decent movie at best in which Paxton dies halfway through somehow it got the most complicated mode, from a design perspective at least. (Paxton dies in a lot of his movies I’ve noticed) U-571 mode starts randomly when nothing else is going on. The periscope lights up and the sub comes out. It’s all mechanical animation as a homage to the pinball machines of yesterday. The goal is to shoot the ball up the right ramp – normally this does the “Wheel ‘O Fate” but with U-571 active there’s a trap door which drops the ball back down into the shooter lane (loads the torpedo). Player re-launches the ball (fires torpedo) and if the U-571 is still in the crosshairs it is “hit” and points are awarded. This was one of the last modes I added to the machine. 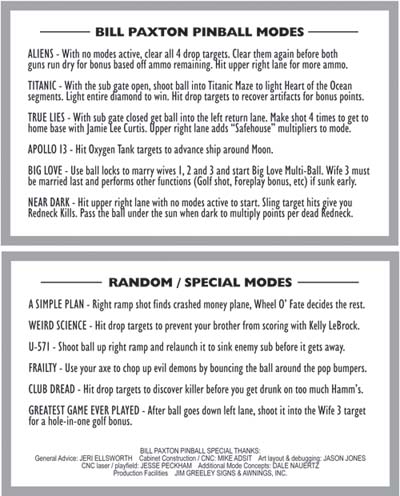