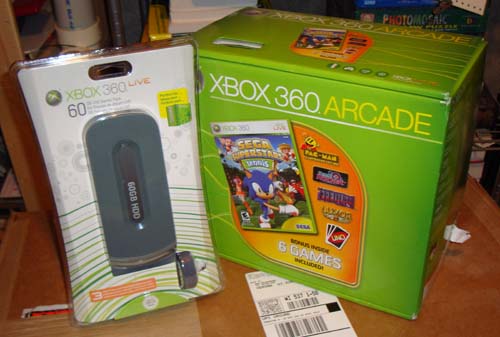 From what I have seen, this is the box to look for.

Slight update for you all… I found another Jasper, this time in a small town Wal-Mart. Same place I found my first Falcon. For those hunting the Jasper, small towns are a good bet because usually Wal-Mart is the only place to buy anything, thus the throughput is higher, thus they get newer units faster.

Seems the Sega Superstars Tennis pack-in labeling is the box to look for. This was a team FDOU, lot #0834X. However unlike the lot #0842X, this units power supply was marked 150W.

175W Falcon PSU on left, 150W Jasper on the right.  Though different they are fairly similar, there wasn’t as much change as between the 203W and 175W versions.

For more pics and details of how you can spot one in a store, check out my article on Engadget.

I still have not seen a 60 gig version of the Jasper. However you can get those 60 gig drive kits for $99, which can turn your Jasper Arcade into a 60 giger for the same cost, plus you’ll get 3 months of Xbox Live. Win-win.

Shouldn’t be rocket science but the Elites seem to be the slowest selling these days and will likely be the last to get Jasperized (new term).

Checked out a Best Buy today… lots of new Xbox 360’s in stock. Looked like they do the reverse of supermarkets, ie, the freshest stuff is on top and not in the back/bottom.

ANYWAY it’s been reported elsewhere on the web that the Jasper all-65nm Xbox 360 (with rumored 256 meg onboard storage) has been seen with this data:

I examined a unit from Best Buy that had the following:

…and though it was very close to the “Jasper” specs, it still had the 175W power supply. The power supply is always the “key” and in this case, doesn’t indicate a Jasper.

So if the Jasper that’s been found is correct, then its lot/date are likely the absolute minimum to find the new chipset, since the one I saw was only 1 lot # lower and 5 days older.

Once I do find one I intend to rip it to shred and share with the world (I can always use Xboxs, it’s like buying bulk Diet Pepsi) I’m looking forward to it!

I am going to Richland Center tomorrow for a thrilling wisdom tooth removal, it is at that Wal-Mart I found my first Falcon, perhaps I’ll get lucky again!