“Behold… his MIGHTY HAND-HELD!” – Chuck Heston a la Moses a la The Ten Commandments, using the Sega Exodus (along with the Power of God) to part the Red Sea. (This is one of those “cut” scenes from the movies, yeah)

Well I guess it started a few months ago when someone emailed me RE: a “Genesis-in-a-controller” thing being released. Unlike some of the stuff you see (ie:, the NES-in-a-controller) the Sega one is legit and licensed to a company called Radica, whom I also believe were involved with making the small Revision 3 Genesis from the late 90’s (that nobody has hardly ever seen)

Ordering one online was a whopping $35 so I was a little hesitant (although it’s obviously perfectly OK for me to rip apart brand-new PS2’s). However one day in line at Best Buy I saw some of the Radica Genesis’s for only $25! I immediately bought one.

And upon getting home immediately ripped it apart. There’s a small little fakey “Genesis”, measuring about 3″ x 2.5″ x 1.5″ and a controller. Inside the fakey Genesis is a small circuit board containing a mini “Genesis-On-A-Chip” (GOAC) and a ROM chip. This ROM chip contains the 6 built-in games. By desoldering it and deducing the pinouts I was able to attach a real live cartridge connector to the thing and make a regular functioning Genesis. (There’s a photo of this on the main news page) 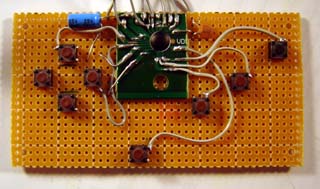 For some reason I couldn’t use the IC from a regular Genesis controller (didn’t work when I tried it) so I just carved out the IC glop-top from inside the Radica controller and used to make the built-in controller for my Exodus, as seen above. 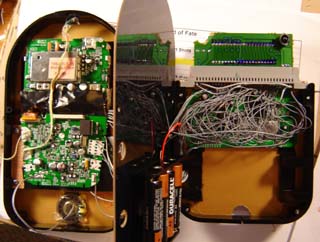 Next I designed a case using Adobe Illustrator. It has 3 main parts, the front (holds the screen and controls), the middle match plate and the back (holds the batteries, Genesis board and cartridge slot. The screen is a Casio EV-680, which is the same as a RCA or Cinevision 3″ TFT screen from Radioshack (They’ve all got the same guts) 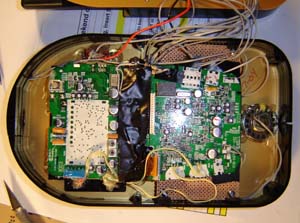 Here’s the front of the unit a little closer-up. As you can see, only about 10 wires go from the back of the unit to the front. It’s a fairly simple system, aside from all the minute wiring on the Genesis board itself. 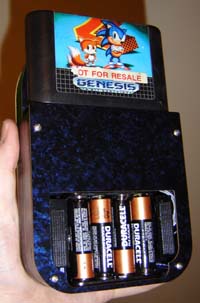 The back of the thing with the battery cover off. As with the NOAC NES portable I made, this takes only 4 AA’s and only draws about 360mA total. This is due in fact to the Genesis part only drawing 60mA and the TV using a white LED mod (instead of the bulb it came with)

Alright, as you may or may not know Sega actually made a portable Genesis back in 1995 called the Nomad. But I figured this one might be better in a few ways:

So remember the morale of this story: the Radica Genesis 6-in-1 gamepad thing can be made into more than it seems…

FUN BONUS: The pinout I came up with for attaching Genesis carts to the Radica can be found on the DOWNLOADS page.

One thought on “Sega Genesis “Exodus””