Well I was at Best Buy today looking for Compact Flash cards to use on the new Atari 800 laptop, and I figured while I was there might as well ask about the new PS3 Slim. 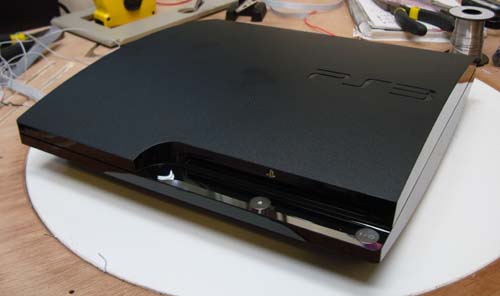 A PS3 Slim, on the rotating work bench disc of death.

Turns out they got 40 in last night so I decided to buy one. “Would you like a warranty?” they asked, unlike Circuit City would of. “No, I’m ripping it apart”. I love saying that – it’s not a lie, and it stops warranty upsells dead in their tracks.

Ran it for a little while – it’s very quiet, in dashboard mode you can hardly hear it running. During a game you can hear the Blu-Ray making random access motions (if you turn off the game sound) but still, a fair degree less noise than the PS3 “fat” and several chainsaws of decibels below the Xbox 360.

Of course the next thing to do was rip it apart. Check out the rest of the article for in-depth analysis.

(Note: I know this info has already been on the web, but I wanted to take one apart, naturally, and I felt I may as well share my opinions on the unit as I do) 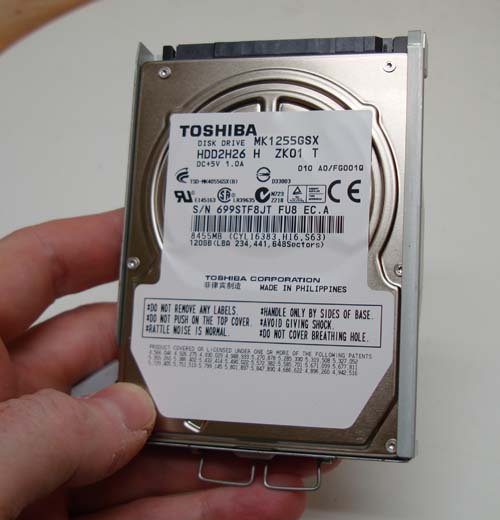 Here’s the hard drive. It’s not a Hitachi “Death” Desk-star, that’s good. It’s probably 5400 RPM like most of the consoles, but I couldn’t gather that info from the label. 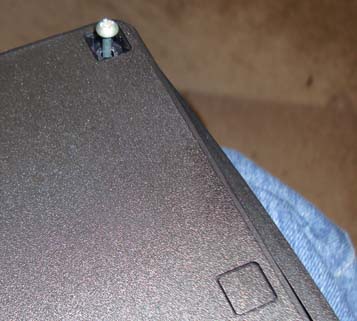 Usual Sony “screws under feet” method. There’s a long Phillips screw under all the feet except one. At least Sony is consistent.

You know, I talk about the Xbox and Microsoft a lot on this site and the podcast, but most of my stuff is Sony. Like this photo. It was taken with a Sony camera, and as I type this my Sony 5.1 desk is playing…. the Carpenters. And when I went to buy the PS3 I was listening to my Sony car deck. Maybe I’m a snob, but I’ve just always preferred Sony. (Except during the N64 years) 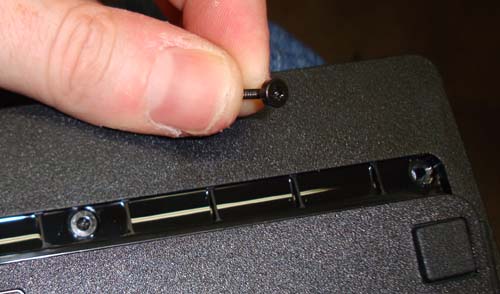 I find this humorous. Apparently as long as a screw is covered by something (such as a rubber foot) it can be a plain Phillips, but if it’s visible, it needs to be a security screw? You don’t even need a special bit to open these, just a very thin flat head screwdriver. Well, to each engineer his or her own. (Non-sexist version) 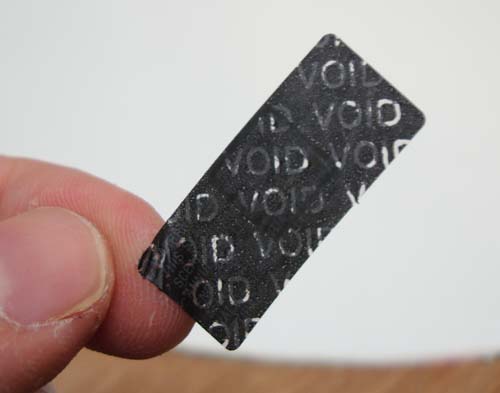 Last screw is hidden under a warranty-voiding sticker. Darn, can’t return this thing to the store – guess I’ll just have to make a laptop out of it!

FOXCONN – they’ve been making parts for consoles since the dawn of time. The cartridge slot on the Atari 2600 was a FOXCONN, and 32 years later (god has it been that long?) here they are keeping the faith on the PS3. Go FOXCONN! Hopefully they never… FOXDIE!

Speaking of that, was the main character of “inFamous” trying to do a Solid Snake impression the entire time or was it just a gravely voice coincidence? 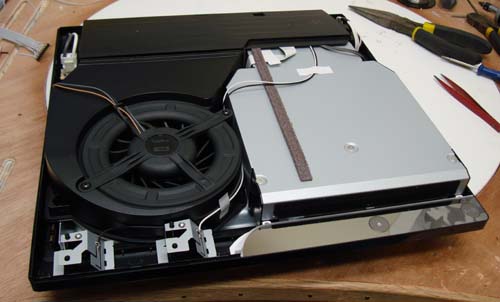 This is different! Fan’s on top instead of the bottom. The rear portion really impressed me – it has a Sony logo and some text, as if they expected someone to open this sucker up. Very car-engine like! 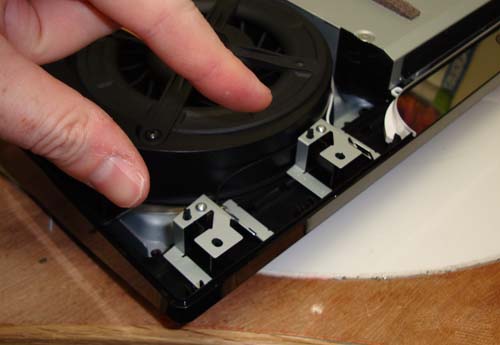 The Wi-Fi connections go to this pair of metal brackets at the front of the unit, forming  a pair of antennas. Interesting. 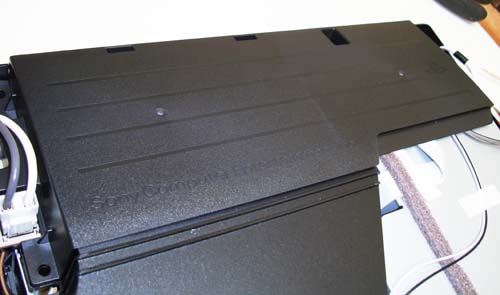 Not sure how legible it is, but it says “Sony Computer Entertainment”, and then there’s a PlayStation logo on the far right. I don’t believe I’ve ever seen a company bother to make the inside of a console look this cool before, so my hat is off to Sony. Asthetics aside, this black portion is the power supply. 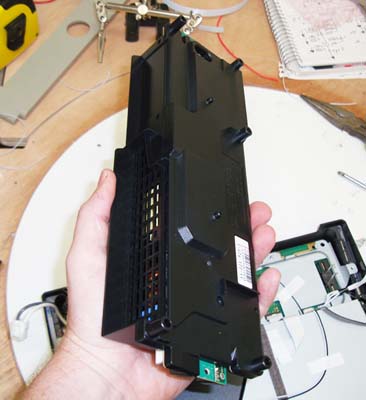 After pulling out the PSU it resembles a toner cartridge from a printer/copier. Still, it’s interesting how modular this part of the system is. Also of interest is the fact the system fan blows the heat off the CPU/GPU and then THROUGH the PSU assembly, and finally out the back of the system. Again this reminded me of a car, where often the electronics are in-line with the air vents to keep them cool. 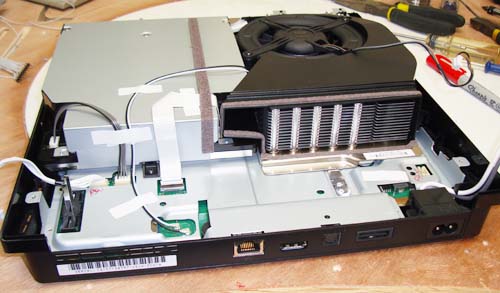 The area that contained the PSU. We can see the Blu-Ray connections and the exhaust port of the CPU/GPU fan. The fan / radiator is still quite large, but not nearly as massive as the original PS3. 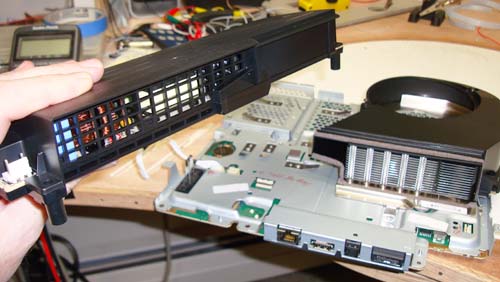 The CPU/GPU fan output on the right, the PSU input on the left. 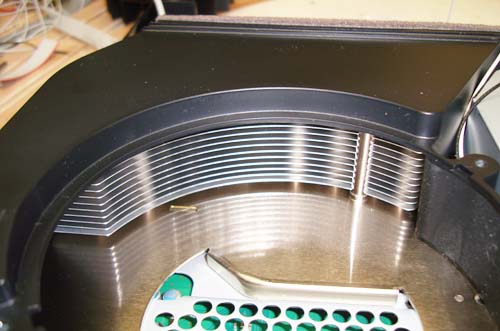 Here’s where the fan sits. As with the original PS3, there are a series of metal plates connected to heat pipes for cooling purposes. This model appears to use a lot less copper than the original, probably as a cost savings. 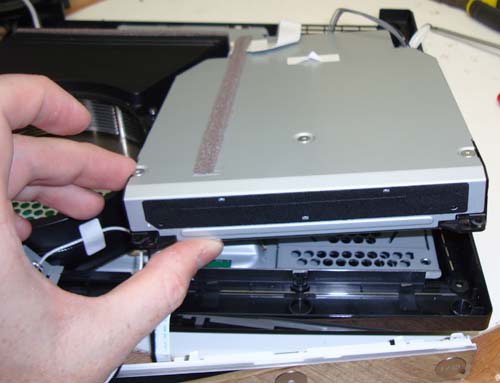 The Blu-Ray drive is a bit smaller – and more traditionally shaped – than the model in the fat PS3. It’s held in place by 1 screw, which seems wimpy but of course the Xbox 360 DVD is held in by none! Mechanical retention – the cheapest fastener of all! 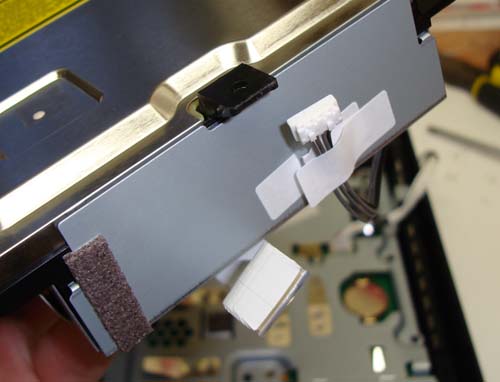 Holy cats – a very reasonable connector on the Blu-Ray player. This looks to be a 24 pin connection, plus power.The original PS3 has a 90 pin connection on the Blu-Ray. No, seriously, I counted – it was nuts! Granted, this isn’t as simple as a SATA connection, but it’s a fair sight better than it used to be! 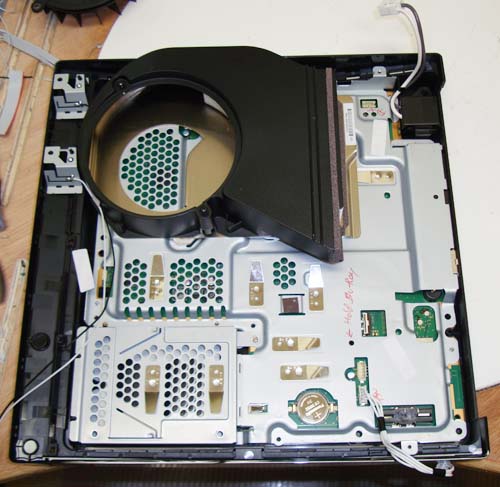 Here’s the main portion with the Blu-Ray and fan removed. The motherboard is enclosed in a metal cage, much like the original PS3. 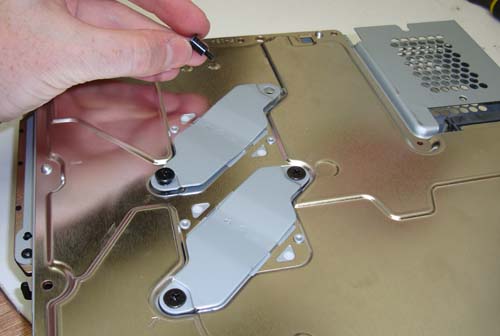 The clamps for the CPU/GPU are the same as the original PS3. 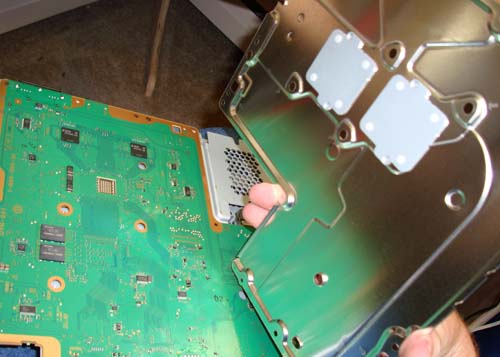 This part seems kind of weak. The clamps have plastic tabs that press against the main motherboard. 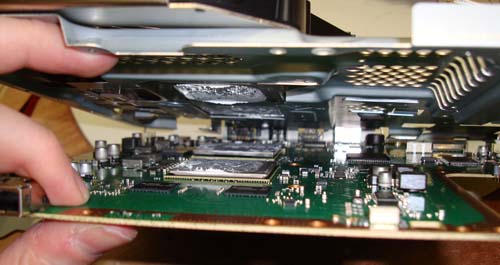 This part is always disconcerting – pulling the heatsinks free of the IC’s. You never know if it’s the thermal transfer material holding it in place, or some screw you missed. Luckily this pulled apart fine to reveal the same thermal pastes we’ve seen since the PS2. 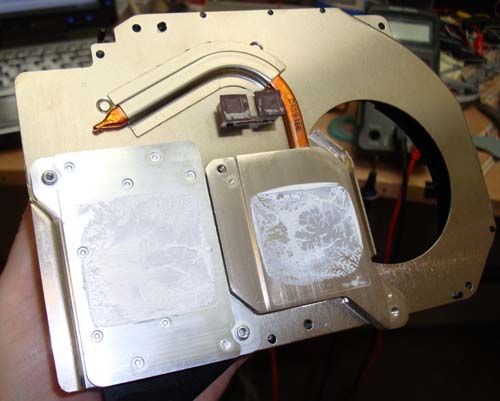 Most of the cooling posts are on the GPU, with a heat pipe connected to the CPU. 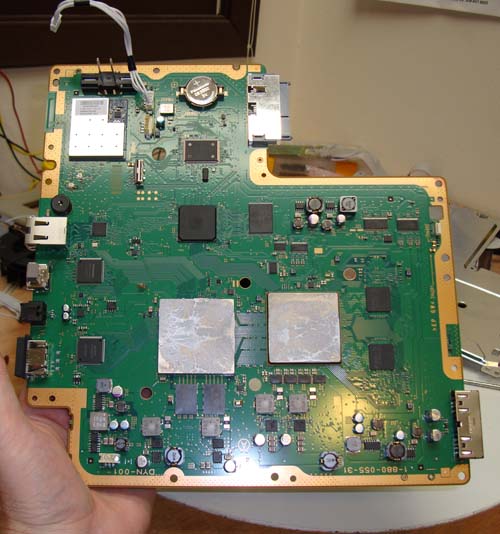 Here’s the motherboard with everything off. Click here for a larger version.

Well, that’s about it for taking apart the PS3 Slim. Overall impressions:

I guess we’ll have to see what happens next!