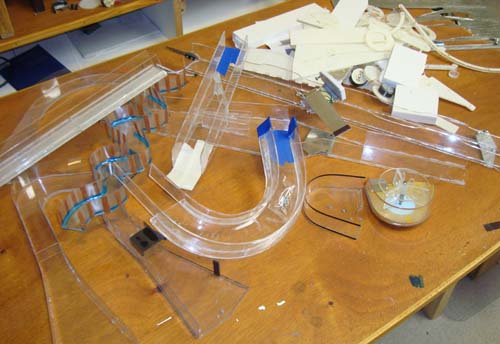 These are just the ramps that DIDN’T make it into the game! (I think I ended up making every ramp at least 3 times)

Wow it’s been a couple months since the last official Bill Paxton Pinball update! The playfield is complete, the code is less buggy and it will definitely be done in time for the 2010 Midwest Gaming Classic.

The full, final reveal of the machine on this site will likely be around March 17th. You can keep up with the progress by subscribing to my YouTube channel or Twitter feed. (Warning: Twitter feed also contains a lot of non-work-related ramblings, usually about beer, the weather or waiting in lines)

For a sneak peek at the vector drawing of the final board, hit the rest of the story after the bump. We’ll see you soon!

Vector drawing of the final board. Parts will be described in excruciating detail when everything is done, for now I’ll just let you speculate 🙂