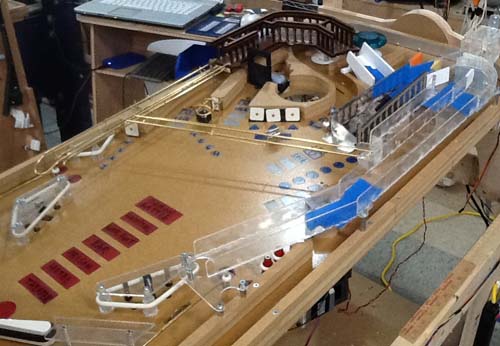 So the big news is we scrapped “Lost” pinball. This was for a variety of reasons, the main being we spent so much time trying to cram things into it that we didn’t spend enough time making it play well. So it’s a beautiful game with boring loops and bad ball returns.

But, much like our independent film projects of the past, we took this as a learning experience of how NOT to build a pinball machine. Since then we’ve been working with John Popaduik who’s taught us a lot, and is even putting me in his Zombie game!

Our next pinball project is a custom game inspired by the 2011 Halloween episode of The Ben Heck Show… Ghost Squad! It started as a way to test our new system, but is developing into a game as well. Here’s why we picked this theme:

We’re also trying to have more ball interaction toys than our previous efforts. Special features include:

So keep on eye on this site, my YouTube page and of course the Ben Heck Show!

8 thoughts on “Latest in the World of Pinball”