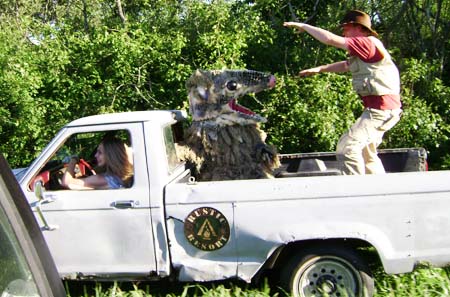 I’m posting to let the interwebs knows that my indy film “Possumus Woman” (formerly “Possumus Man 2: Possumus Woman”) has reached the 82% completion point. Last Sunday we got the most complex scene out of the way, a fight on the back of a moving truck between myself (as Grady McDunaway) and of course the giant killer possum.

It went pretty well (we brought lots of ice-cold bottled water) and we did everything “for real” – there are no special FX in the entire sequence. In fact the movie probably won’t have more than 25 or so FX shots total, a far cry from my previous films that won’t create the crisis of delaying the project. And this movie has been a lot faster to make – coincidence?