From the press release:

For 2010, Ben Heckendorn and his forums members return to make the benheck.com experience even better than 2009! Project reveals and discussion, real time modding and even the ability for show-goers to bring their own consoles to be modded by benheck.com regulars will be available as the benheck.com Experience moves into it’s own room and they throw out all of the rules about how your console or controller needs to look.

Check out the official site!

You can check it out by clicking here – watch for my cameo!

Well I’ve arrived at the hotel and it does indeed have free Wi-Fi, rare these days.

Oh and the TV gets the SciFi channel, maybe I’ll be able to catch Battlestar Galactica’s series finale tonight! (instead of having to buy it off the Xbox 360)

Missed Battlestar but who cares – the hotel bar has karaoke! Stayed out a bit too late (ok, bar time) but it was a lot of fun. Parker Dillman, Atari Video Mods guy joined me along with some other people. Did my usual sure-fire Achy Breaky Heart.

Well I am only slightly hungover so I should be good to go! Will be heading to the convention floor soon…

Day 1 is over… wow I am tired. Should eat some food at some point too. Forum members showed off a lot of their mods, pretty impressive stuff.

Tomorrow should be quieter, I’ll probably work on the controller monitor more.

Apparently there is some sort of after-party, guess I’ll check it out after I rest a bit.

As you probably know the Midwest Gaming Classic is coming up next week. As you may not necessarily know we’ve got a booth there this year called “The Benheck.com Experience”. Look for this banner!

Here is the current tentative schedule of what we’re doing: (“events” in bold)

If you have any questions or “event ideas” for us to add, discuss below! Also if you’d like to show something you’ve built at our booth, please email me.

We’re back with our 41st episode which is also our 3rd episode done in video. As usual I didn’t have time to make it as awesome as I’d like due to time constraints, but I hope you all enjoy it regardless. 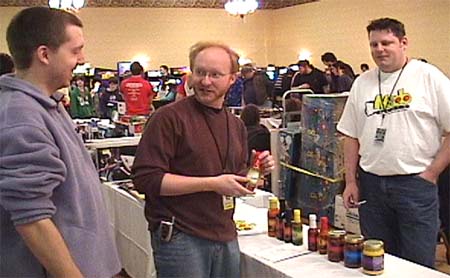 In this exciting episode we visit the 2008 Midwest Gaming Classic in Oconomowoc, WI. Thrill as we wander around buying things, comment on the items in the gaming museum and talk to fans and customers. The main meat of the video is my presentation at this year’s show, which includes “Ben’s Modding Tips”, new and upcoming projects and a brief question and answer session.