I thought about doing one of these years ago, right after my first Atari 2600 portable actually, but after taking a look at the motherboard (which is a lot more complex than the Atari 2600’s) I got cold feet. 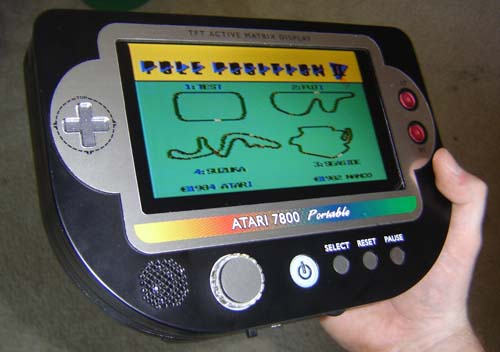 My feet are much warmer now and thus here is an Atari 7800 portable I’ve done by request. For some reason I am just not that intimidated by “complex looking” electronics anymore, I don’t know why! The 7800 motherboard is a bit larger than the 2600, thus the unit is larger, but I slapped on a bigger 7″ widescreen to make up for it. (Kind of like the iPhone ads that allegedly use giant hands) Quick specs:

For the making-of story and more pics than I usually post, click below. There’s also a video where I describe the functions. Now that this is done I can allot more of my time to “Possumus Man 2: Possumus Woman!” (Working title) 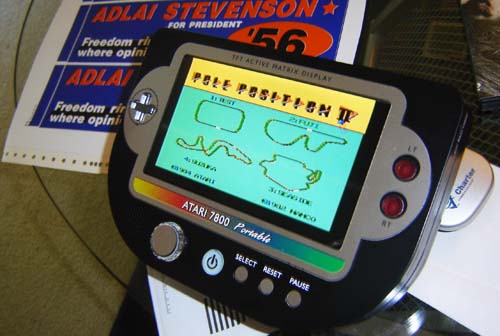 Let’s take a look inside this bad boy, shall we? It starts with a fairly typical laser-cut case, which I painted with several layers and rounded the corners. 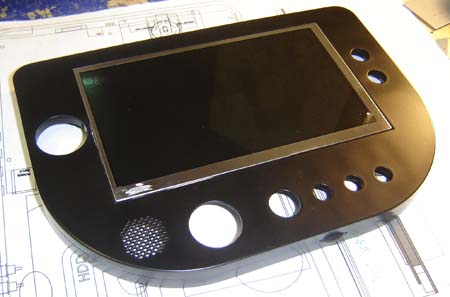 Next up was the driving controller. Originally it looks like just a paddle but the insides are different – instead of a potentiometer there’s a gray box which contains a simple encoder wheel, attached to the up and down signals to the joystick. And it was made in America! (30 years ago) 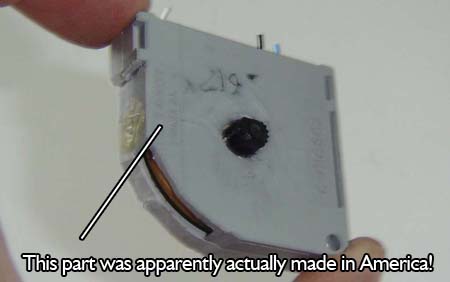 I rounded one corner, took out the original shaft, and stuck a 1 meg-ohm potentiometer through it. Having this control increased the total depth of the unit but it’s what the customer wanted so, so be it! 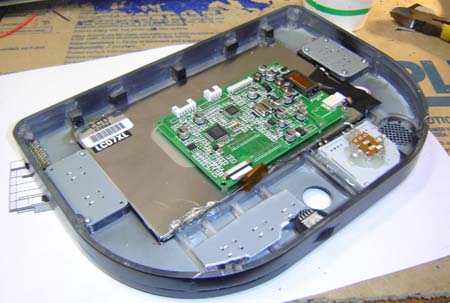 Inside of the top of the case. The screen is a 7″ model from AEI components. You can also see the volume control potentiometer near the base. 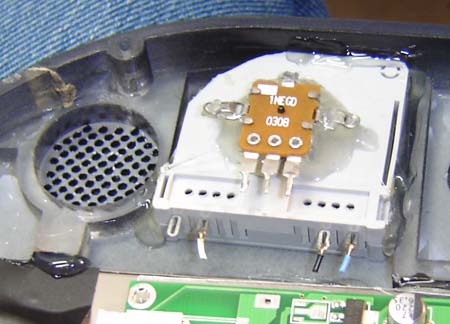 A close-up of the potentiometer/driving controller combo. Oh yeah, it’s hot glue again. Just imagine how much I’ll use on the Possumus Woman costume! 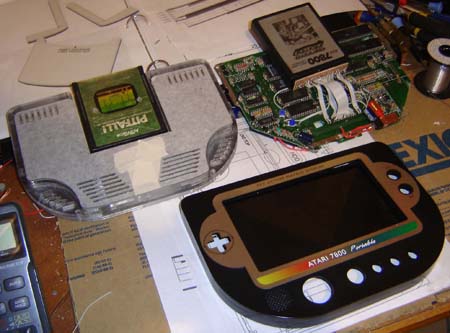 The main parts – rear of case, with battery slots, motherboard with cartridge connector, and front of case with screen. 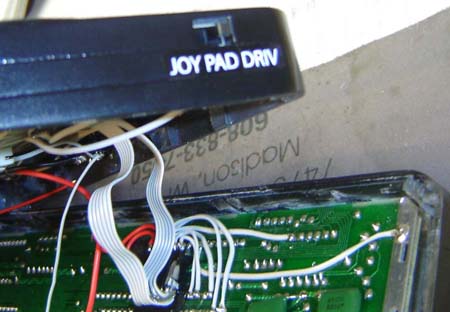 A close-up of the controller switch. This is a 3 position multiple pole switch from Digi-Key, which gave me enough configuration options to do the switching manually, rather than use an electronic bus switch. 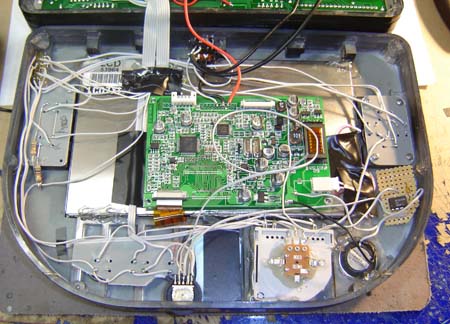 The top of the unit insides. There is a simple LM386 audio amp over on the right, and lots of wiring throughout. As is my current fashion, I try to group as many signals as possible into a single ribbon cable cluster with header plugs, so it’s easy to take the unit apart. 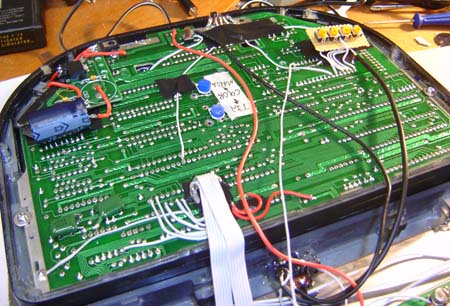 Insides of the rear, with motherboard. I discovered that the 7800 has a color tint adjustment pot for both the TIA (2600) and Mario (7800) graphics. 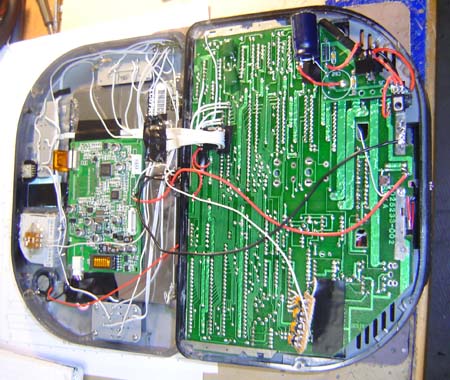 Overview of the insides. 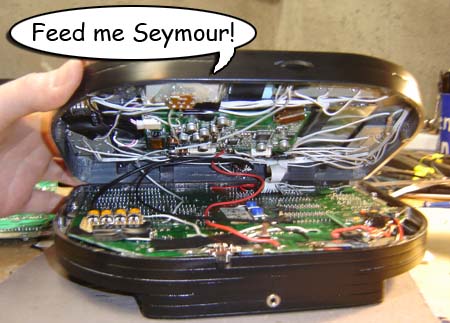 The unit when slightly opened. 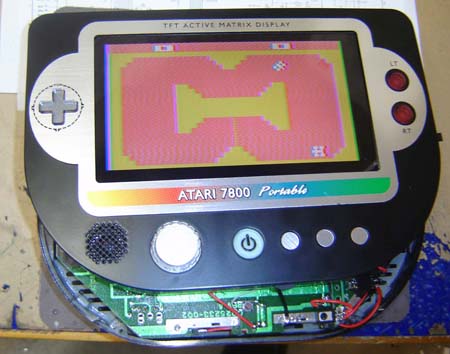 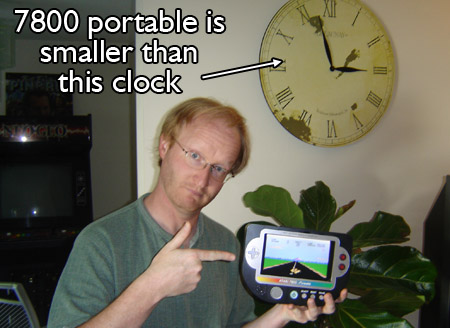 You can never have enough giant clocks. 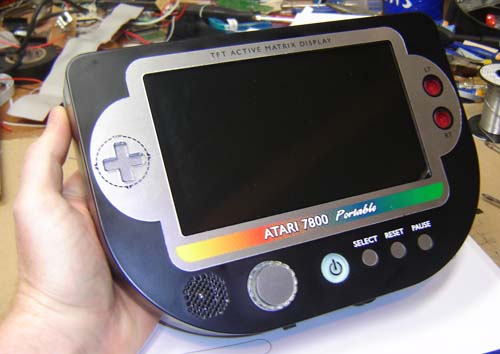 Unit sitting around in OFF mode. As with the original Atari 7800 this uses the “soft” on/off switch, which was about 16 years ahead of its time for a games console.