A while back I decided to take some time off and now I’ve finally done it! I’ve spent most of the last few weeks working on a long-gestating “dream” project of mine, which is to build my own pinball machine from scratch. Since my time off is coming to a close, I thought I would my show progress from these last few weeks. 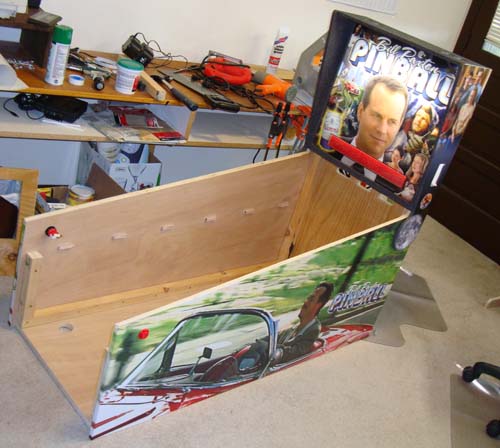 Shown above is the main cabinet that I built last week, as well as the illuminated backbox. As many of you know, the theme of the pinball machine is Bill Paxton – a fine American actor who has thrilled audiences with a variety of characters over the years.

Why Bill Paxton? Well it’s as good a theme as any – I guess I could have gone with a more obvious geek choice like Bruce Campbell but to be honest, Paxton’s more interesting and has made movies people have actually seen. In the end what this project is really about is building something very complicated from scratch, so the engineering is the real star.

I should make clear that this is a personal, non-commercial hobby project for myself, since it clearly contains artwork and sound from movies, it could never legally be resold. But considering how few projects I actually build and keep (this would be the 3rd, after the original VCSp and my Neo Geo Arcade) I deserve to make myself something cool every once in a while!

For some more pictures and info, click below. You can also see some making off stuff on my YouTube channel.

My current plan is to have this completed in time for demonstration at the 2010 Midwest Gaming Classic in Milwaukee, WI – let’s see how I do! 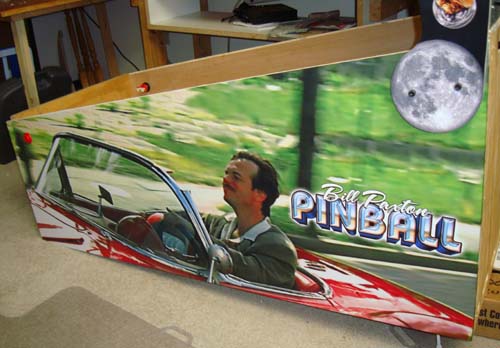 In spring 2005 I decided to build a pinball machine. Several minutes later I came up the theme “Bill Paxton Pinball” and several minutes after that I knew exactly what I wanted on the side panels. It’s Bill paxton as “Simon”, the sleazy, womanizing used-car salesman from True Lies, driving his ’59 Corvette. I had a helluva time getting the screen cap to look decent blown up to this size (not only do I not own True Lies on Blu-Ray, the DVD I have isn’t even anamorphic!) but several Photoshop filters later and it became pretty good.

The idea with the pinball is to have the modes based off popular Bill Paxton movies, for instance, in “True Lies” mode, you’ll need to shoot combos and multipliers to I guess get into Jamie Lee Curtis’ pants.

Some current other mode ideas:

If the ball goes down the drain the game will play a mode-specific negative comment, for instance, in “True Lies” mode, Paxton would probably say “I got a little dick, it’s pathetic!” 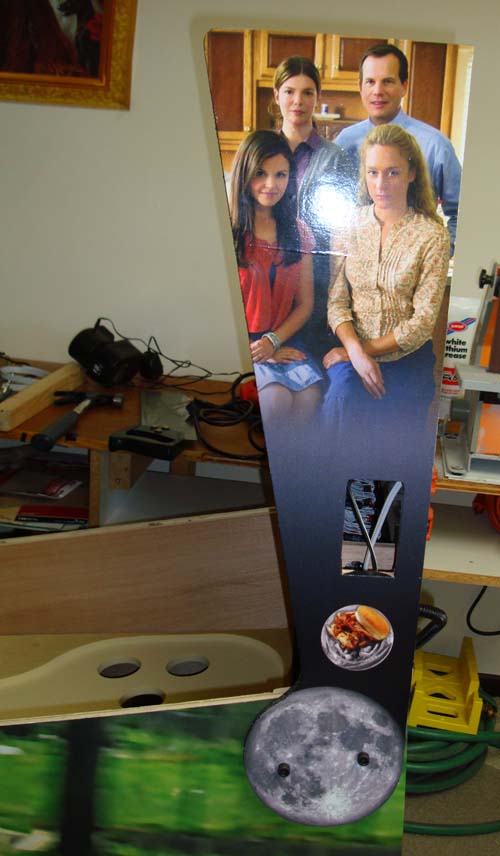 Look it’s Bill Paxton’s family from the weird HBO show “Big Love”! Instead of multiball this game has BIG LOVE MODE, in which you must juggle 3 balls at once – fitting, eh? Also notice above the moon (“Apollo 13”) there is a greasy pork sandwich being served in a dirty ashtray.

The square hole is where the speakers are going to go – I didn’t want to “use up” space on the backglass with speakers so I put them here instead. Should sound fine. 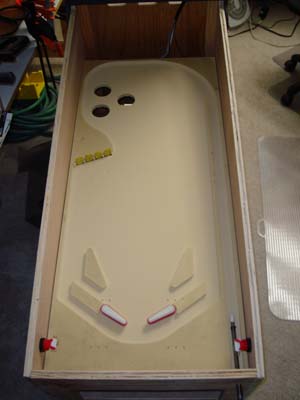 Temp playfield made from high-density foam. I’ll use this to fine tune the shots and see how the game is working before I rout a final wooden board. You can see the “Aliens” drop targets on the left, I may need to rotate that counter-clockwise if those shots prove too easy.

I’ll be honest, I don’t want this game to be THAT difficult because it’s more about having fun and getting a laugh from the cheesy dialog, but I don’t want a cakewalk either. 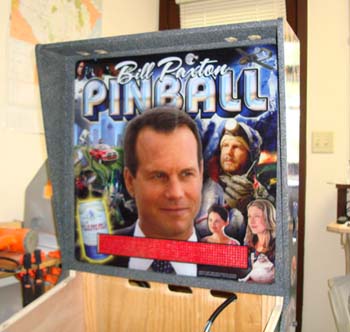 Main backglass. I did this over a year ago, and I started wiring the LED matrix in 2005! It’s kind of a struggle to make parts go together, well, not physically, but when it takes so long to build you get kind of “stuck” with your old engineering.

The backglass contains the following references:

From a design standpoint, all objects are facing / going inwards to draw attention to the main photo of Bill Paxton. 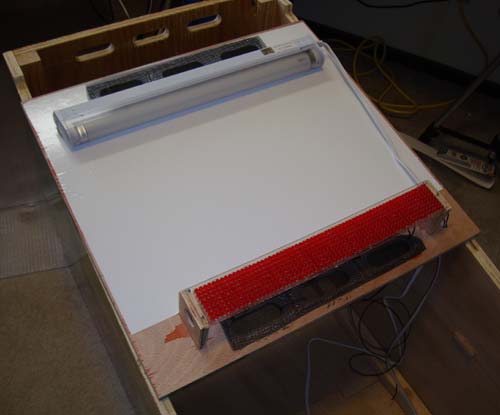 Inside the backbox. I was able to light it with a single flourescent bulb, as well as using extra white vinyl to make a light bounce. As usual this contains the Ben Heckendorn special “vent holes covered with 2 layers of plastic screendoor material”. 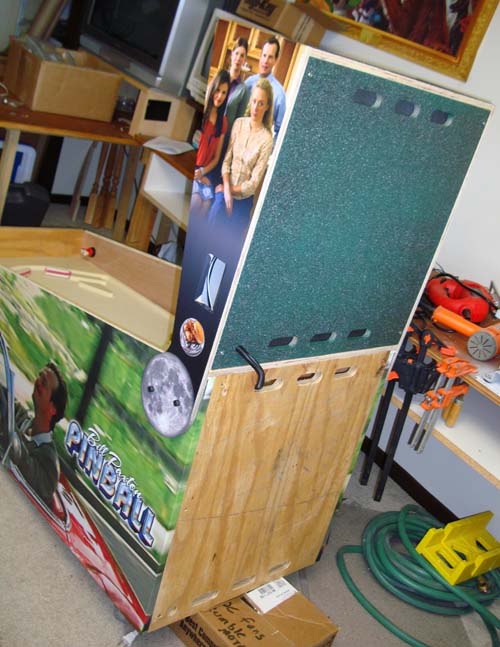 Back of the unit. It’s a little rougher than the rest but hey – it’s the back, who cares? Note the data, power and speaker wire bundle coming out of the backbox.

Well that’s about it for now. Gotta return to my usual Xbox 360, custom controllers kind of work, but I’ll keep you all posted on the progress of this as well. Until next time…