OK by now some of you may be thinking “Ben is becoming the ultimate Xbox 360 fanboy with all these articles” and yeah, maybe you’re right. But is it really any different from any number of political blogs, or bumper-sticker-encrusted cars, where someone is screaming “Don’t vote for [whoever], it’ll be bad!” Well I think if the Wii won it’d be bad for gaming (the reasons for this being beyond the scope of this article, maybe later) so I’m promoting the 360 any way I can. 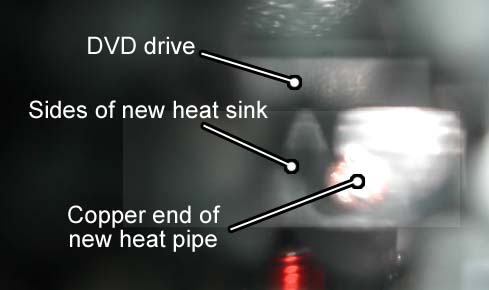 The new heat sink on an HDMI Premium 360, slightly highlighted. Remember, look for the copper “ball” on the side.

Picture aboved is a new heat sink found in a new HDMI Premium Xbox 360 by “Sloopydrew”. The manufacture date was 7-9-7, pretty new. So if you’re still on the fence about getting a 360 this fall, get off! The new ones seem to be locked, cocked and ready to rock. Still sucks GTA4 is pushed back, but plenty of other cool games are coming out this fall.