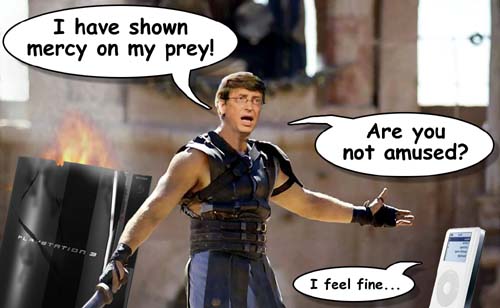 Last week Microsoft officially announced the upgraded Xbox 360 “Elite”. This is basically a souped up 360 with the following stuff added:

All for the bargain price of $479. It does include an HDMI cable which is pretty nice – I am sick of people saying “you can buy one online for $15!” True, but for all the schmucks who get one in the store it’s at least $75. I could buy screws for 1/10th the price off McMaster Carr, but 9 times out of 10 I just go down to Ace. That said, it doesn’t include:

One less bullet point, but a big deal. In this article that I’m writing to sluff out of doing other things on a Saturday morning, I’ll postulate on why I feel Microsoft is making a mistake with the Elite / pricing and what it could mean to the PS3 and Wii.

My podcast co-host Jason Jones is always asking me “Ben when are you getting a 360??” And I keep telling him “This fall, when it gets cold again, the new Xbox 360 is available and GTA comes out!” Now that I’ve seen the Elite 360’s specs, I’m not so sure. Here are my reasons, which can probably be echoed by many gamers:

Now a person might say “But the PS3 is losing all its exclusives!” True, but that doesn’t mean they’re not going to be on the system! Sure, if the 360 dominates they’ll stop making PS3 versions, similar to what happened with the Gamecube, but for now all the top games are on both systems. As for 360 exclusives, none have really blown my skirt up yet. I will say with no regret I liked Resistance: Fall of Man better than Gears of War. The 360 game I’d really like (but will never have time to fully play) is Oblivion, but of course that’s also on PC and PS3.

Alright so I’ve established why the Elite is too pricey. I also think it’s a mistake to have not 1, not 2, but THREE SKU’s (store keeping units, in case you ever wondered what that stood for) of the 360. Talk about confusing. Now let’s look at some ways Microsoft could have really gone for the jugular:

Well that’s about it! We’ll see what happens this coming holiday season, but if you ask me Microsoft is missing an opportunity to kill off the Playstation. I mean, why not “just go for it”?