Wow a lot of reaction to my single-handed Xbox 360 controller! I am surprised but pleased. Been getting a lot of email requests already – a nice break from the usual “plz build me a xbox 360 laptop using a game gear screen for $5” ones. 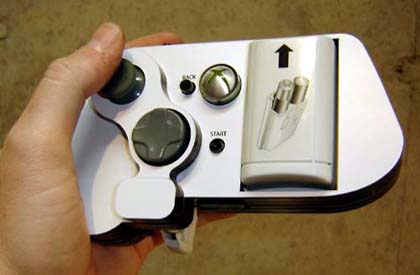 Melts in your mouth, fits in one hand.

I suspect this sort of item wouldn’t have a large enough market for the typical mass production so maybe that’s where I could come in. I think a more “universal” controller might be best, whereas the thing you hold is nothing but the controls / buttons / analog sticks. Without the bulky circuit board(s) the design could be a lot better. Then this would wire to a standard controller, which could be from any system really. Granted it wouldn’t be a solid “all in one” unit like this prototype but would be a lot easier for me to build (or for people to assembly as a kit) and that means more can be built.

Here’s the first revision of my design from back in August (yes I’ve been tinkering with this for quite a while) Originally I wanted more of a handle grip design but this proved a bit too tricky for the CNC methods I used to cut it. 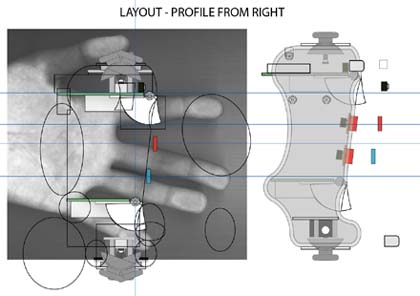 Rev 1 of the design. Yes, that’s my hand in a scanner, because I am just that hardcore.

So yes, keep those emails coming. Click here to send ideas or requests regarding this project, I shall read them all and do my best to get back to you. If you have facilities or such that could assist me in these endeavors (to increase production numbers) let me know as well. I would like to see what kind of support we could find for a product like this.

2 thoughts on “More about the single handed Xbox 360 controller”