Seems like the Xbox 360 Elite article has gotten a lot of attention of late so I decided to talk about it a little more. 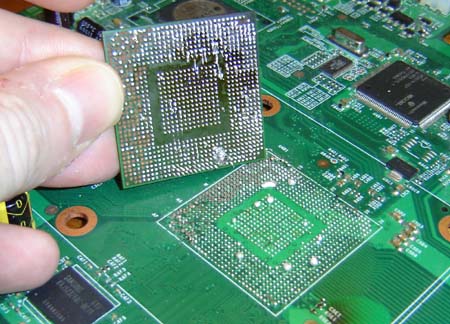 Just blowtorch your 360 and you too can look under the GPU.

In this “addendum” I’ll talk about the heat sinks, wicks in the heat pipes, and the DVD drive, since the scratched discs thing is also a concern.

I’ll start by answering some of the questions from the Comments of the previous article.

Q: Is there anyway to use the video connector on a normal 360 and convert it to HDMI? If so could you show us?

A: I’m sure somebody makes some sort of adapter but what’s the point – it’s not going to improve the signal. From what I’ve seen 1080i from the 360 via component HD looks pretty good anyway, and a lot of TV’s will automatically de-interlace it to display a 30 FPS progressive scan picture.

Q: What was the date this elite was produce? I know the launch elites did not have that added heatsink. So some of us are trying to figure out when MS started adding them.

A: I bought this one on July 5th or 6th… Believe it was the same week I saw Transformers (which I thought was about 45 minutes too long) so yes, beginning of June.

I believe the stamping on the plastic case said May… The DVD drive said November of 2005, however. Since the Elite has been in fairly short supply and thus is often replenished, if you buy one now or have recently it has a very good chance of being the updated model.

Q: Benheck seems to be just an xbox 360 fanboy, what a shame coming from someone who should understand how the things work. Besides, this article is pretty informative.

A: You bet I am! This is my site, nobody pays me to write here so I can be as biased as I like. It’s the system I prefer this generation, despite the flaws. I am also a Ford / Sony electronics / Miller Brewing Company / Pepsi / Hormel / Culver’s fanboy, in case you were wondering.

A: That’s a very good question and something that confused me when I first looked inside a 360. Because the U-shaped heat sink on the GPU seems to contradict that as well.

See? If set on-end, the liquid at the base of the heat pipe would have to travel down and back up the reach the end. However I have since learned that heat pipes also employ wicks, which help transfer the heat / gas / whatever between the ends. Wanting to see this, I hacked open a 360’s CPU heat sink.

Slicing open a heat pipe. Note: this heatsink is from a Premium 360, circa 2006. But I doubt the Elite is much different.

The copper pipe is lined with some sort of crystaline substance that I can only assume acts as the wick. Also I didn’t find any liquid inside the pipe. Either it’s extremely thick and didn’t pour out the bottom or, more likely, is something that instantly becomes a gas at normal pressures. Though when I punctured the pipe I didn’t notice any “opening the well of the souls” type gaseous releases. Who knows?

Whatever’s in the tube, wick or no, it’d still be best to lay your console flat since you’d then have the benefit of rising gas and falling condensation for both heat sinks. In theory at least.

Q: Hey are they still using the X clamp on there consoles?

A: Yes, those were exactly the same as always.

Alright let’s move on to another topic – the DVD drive. The other problem reported with the 360 is that it scratches discs. In my nefarious experiments I have gotten a drive to scratch a disc. It occured when I ran the drive open (always a brilliant move) and the plastic “disc clamp” wasn’t center perfectly on the drive. To explain this I have taken some photos: 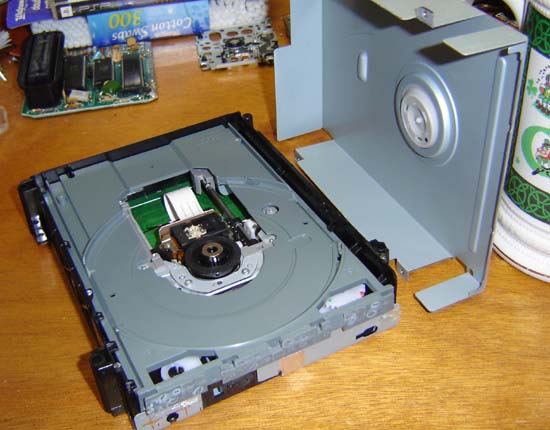 This is the inside of an Xbox 360 DVD drive. Again, it’s not the one from the Elite but I can’t imagine it being much different. On the right you see the lid of the drive which contains what I call the “disc clamp”. This has a magnetic ring which is attracted to the metal on the top of the disc motor and thus “locks” the disc in place. 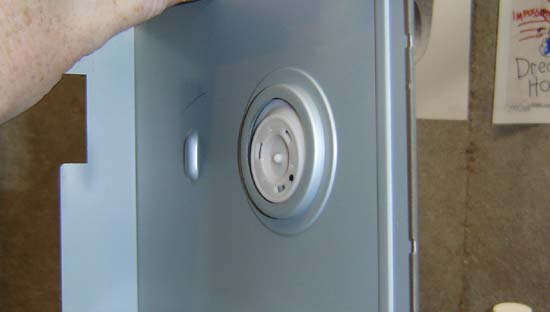 Here is how the disc clamp would look in an Xbox 360 that’s sitting on end. As you can see the clamp can move around a bit in its holder, I would call this a “margin of error” zone. Thus, because of that damn pesky gravity we have it sits at the bottom when the tray is ejected. Therefore it is possible that it might not get a dead-center bull’s-eye grip on the disc which means, once again, your Xbox 360, any version, is better off laying down that standing up. I have mine standing up but I don’t wear a bike helmet either so what do I know?

Let’s do a run-through of the disc insertion cycle to better explain things. Keep in mind a PS2’s disc drive works exactly the same way, so perhaps the disc scratching is caused by other factors as well. 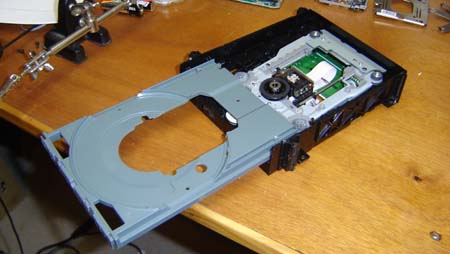 Here’s the tray open and ready for a game. The motor assembly is hinged at the rear and is in the lower position at this point. 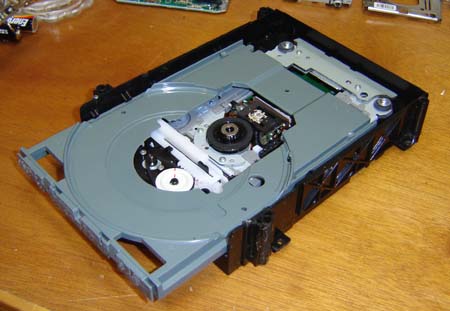 As the tray slides in the motor assembly is still down. A slide latch (seen in the center) pulls it up once the tray is in far enough. 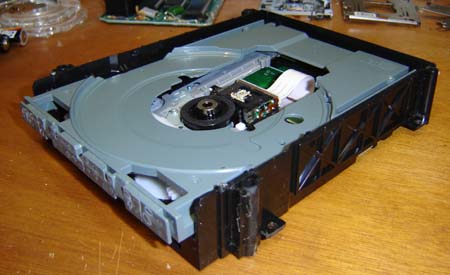 Now that the tray is in, the motor can rise. 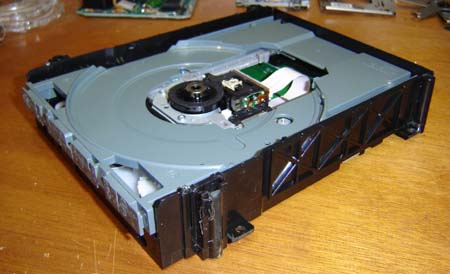 The final position. Once the motor rises the magnetic disc clamp reacts to the metal on the spindle and locks the disc into place… 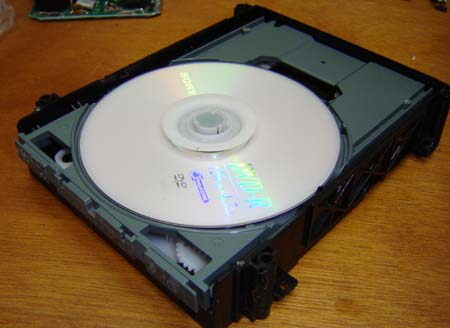 …which would look just like this if the lid of the drive were somehow invisible. The 360 can run with the drive like this but as I’ve mentioned before it spins so incredibly fast it’s scary.

So use this to draw your own conclusions about the disc issue, but that doesn’t seem as widespread – or at least reported – as the Ring of Light thing. My recommendations in a nutshell: