Every so often a movie comes along that’s right up my alley (or at least seems so based on the previews) – Grindhouse was one such film. I really enjoy bad movies, and also the double feature atmosphere of the drive in is fun as well. (Not sure if a Grindhouse is exactly like a drive-in, but I found the presentation to be very drive-in like, personally.)

So what follows is my review of both the movies found in Grindhouse – Planet Terror and Death Proof – and also my speculation as to why it bombed.

Alright so Robert Rodriguez and Quentin Tarantino decided to make this double feature movie thing. It contains (2) 90 minute movies and fake trailers in the front and middle. (Fans of my podcast no doubt know that I love fake trailers.) One thing I was confused by in both films was the fact they were supposed to be like old Grindhouse films but both clearly took place in present day and used modern effects (Planet Terror especially). Not a huge deal, but not what I was expecting.

The first is for a “Mexican Revenge Film” called Machete. It’s pretty funny, especially the part where the bad guy asks “where are my wife and daughter?” and it cuts to our hero with them naked in his pool. Machetes are thrown, explosions occur and much fun is had by all. Apparently they’re actually making this into a direct-to-video movie this fall, too bad Rodriguez will be too busy with Sin City 2 to direct.

We then move onto Rodriguez’s movie entitled “Planet Terror”. Depsite what most critics say this is easily and by far the better of the two films – because it’s fun. The basic plot is that a zombie virus is on the loose in a small Texan town (which apparently is Bruce Willis’s fault because he contracted it from Osama Bin Laden or, eh, who cares?) The movie sets up your usual host of characters including a young bad boy, crusty town sheriff (Michael Biehn, whom it’s good to see working) ex girlfriend / nurse turned stripper (Rose McGowan from Charmed or as I like to call it “Buffy with less money but hotter women”) and some other fun characters along the way. 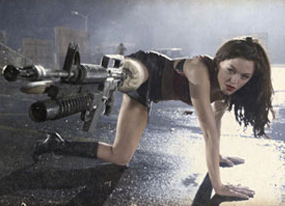 I don’t see how anyone couldn’t enjoy this.

The plot is nothing special of course but the action and gore is well done and a lot of fun. Rodriguez has set out to make a John Carpenter-esque early 80’s film and it is quite authentic, right down to the cheesy synthesized music. Almost every scene is grainy, scratched and looks like a film reel that’s knocking around cheap theatres for years. A “missing reel” is fun as it cuts during a love scene and resumes with the entire building mysteriously on fire.

What this movie really reminded of was 2006’s “Slither”. That was an OK movie but it tried way too hard to become a camp classic like “Lake Placid”. Planet Terror, on the other hand, is very solid and remembered that even if it was trying to be bad it still had to be entertaining. Of course the big gag is that Cherry Darling (McGowan) loses a leg early on. Zombies eat it, in case you were wondering. Anyway, she spends a good deal of the movie with a simple wooden peg (which makes for a hilarious sight gag during the love scene) but of course in Act 3 she gets an M16 installed, complete with the 35mm grenade launcher attachment. (Said grenade launcher,despite being single shot, is never seen being reloaded. But who cares?)

All in all Planet Terror is a good time and a movie I would definately watch again. Other highlights include everyone’s favorite Black Eyed Peas ex-backup singer Fergie getting eaten by zombies, a really disgusting scene with Quentin Tarantino, a helicopter mowing down zombies with the blades and of course the opening credits which consist of McGowan pole-dancing for 5 minutes, albiet in what I like to call “Michael Bay Stripper” fashion (clothed).

We then get the intermission which consists of several trailers, one of the better ones being Eli Roth’s “Thanksgiving”. Quite disgusting and funny, especially the scene with a trampoline. Again it’s funny to see the old fashioned bits of film they used to show at the drive in, like the animations and 70’s style graphics. I laughed quite hard at what was meant to be an ad for a local restaurant. It was spot on, with the insert shots of the slightly-off-frame entrees and cheesy music. Even funnier to think it was probably just Robert Rodriguez cooking things in that kitchen we see on all his DVD’s and then just shooting quick frames of it on a table.

OK at this point you’re best off ejecting the DVD (I say this as it’s probably already gone from most theatres) because Quentin Tarantino’s “Death Proof” is a complete snore-fest. Yes it has some cool car chases, but you’re forced to sit through so much BS to get to them it hardly seems worth it. Worse yet, this being the second movie of the “Grindhouse” it drags the whole thing down. Death Proof is like 2 movies in one, the plot of each being a stunt car driver named Stuntman Mike (played by also good to see on screen Kurt Russell) terrorizes woman with his car which is rigged to be – get this – Death Proof! (we have a title!) 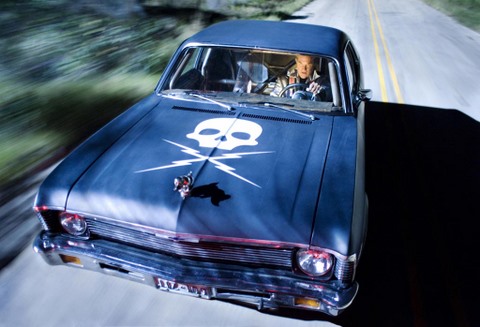 In half one (which some speculate occurs after half two in true non-linear QT fashion) a group of women go out to a bar to meet a guy, or something. There is a LOT of inane babble going on here. For starters we spend about 5 minutes as they drive around in a car talking about men, scoring weed and some other crap I can’t quite recall. They then go to a restaurant where they spend another 10-15 minutes discussing how they’re going to try and set up their friend. They finally reach the bar where – believe it or not – they continue to talk and babble for another good 20 minutes. We also get close up continuous shots of entire text messages being typed out. Not quite as exciting as a woman with a machine gun leg, call me nuts. Apparently QT loves writing dialog for women (and showing their feet) but I didn’t see a single scene where all 3 of them went to the bathroom at the same time so the believability is zilch in my book.

FINALLY our bad guy shows up, stalks them with his car and kills ’em all. Thank God! All in all not that bad, but then we move onto the second half. By now the audience is pretty winded, but this second group of women is even worse. Strike one is that they’re all in the movie business, which means they spend their first wind-bag dialog session talking about on-set romances. Crap. We then move onto what might be the most boring event in film history – a scene of them sitting at a table talking as the camera pans around them. Inane “written-by-a-guy-girl-talk” for I swear 20 minutes. You could literally see people in the theatre growing restless with the bullocks. The whole torturous scene establishes 1 thing – one of the girls has a gun. Couldn’t we have done that in 2 minutes TOPS? Stuntman Mike shows up again, much to the relief of the audience, and stalks these girls as well. The twist is they fight back and it’s pretty entertaining, the stuntwork is impressive. But the rest of it is such utter BS I didn’t care. 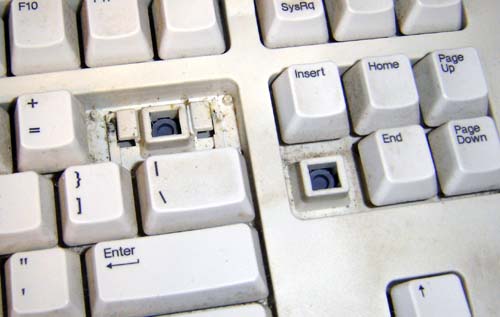 Critics who liked it say Death Proof is more accurate a bad old movie than Planet Terror and this is true. But most old bad movies were bad because of all the scenes where characters sit around either doing nothing or talking. (Manos: The Hand Of Fate is a good example) Death Proof has this in spades, problem is, while this is accurate it is far from entertaining. Worse, he tried to make the endless amounts of dialog clever instead of cheesy. The line “I never miss” in Planet Terror is far better than anything your ears are subjected to in Death Proof.

Now let’s move onto why this movie flopped. Part of it is because people probably didn’t understand the concept. That’s reasonable, it explains the weak opening. But the horrible second weekend can only be attributed to the crappiness of “Death Proof”. There were reports of people walking out during the second half, gee I wonder why? I wanted to walk out, something I rarely even consider. The problem is no matter how fun Planet Terror or the trailers were, if people walk out during Death Proof that’s their last memory of the Grindhouse – that they walked out.

The larger problem is none of the producers can probably blame it on Tarantino. He’s a golden boy director and they can’t risk him jumping to another studio. Thus the blame has to be shifted onto the entire movie, the ad campaign or – I love the stupidity of this one – “middle America”. I don’t know how things work on the west coast but I’m sorry if us Midwesterners don’t enjoy listening to 80 minutes of pointless dialog to see 2 car crashes.

The real kicker is that only half of Grindhouse is being shown at the Cannes Film Festival – and it’s Death Proof! Not only that, but they’ve extended it to nearly 2 hours. It’s hard to believe anything was left on the cutting room floor but apparently that’s the case. What a shame, and a kick in the nuts to Rodriguez.

So all in all, worth a rental for the first half, great fun, but if you’re not a dyed-in-the-wool Tarantino fan I can’t see the second half doing much for you.

32 thoughts on “Movie review – “Grindhouse” (and why it bombed)”