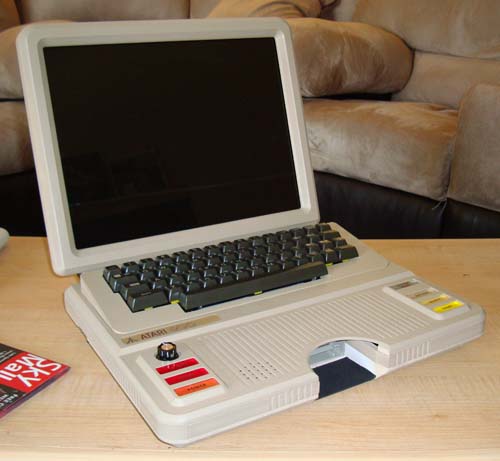 For many years an Atari 800 laptop was my “dream project”. It was the computer I grew up with and thus I have fond memories of it.

Finally in 2006 I completed one. You can see it here. A few years later I did another by request. These were all well and good, but I didn’t feel I properly captured the spirit of the old machines.

Earlier this year I finished the long-gestating Commodore 64 laptop. It turned out great, and looked properly old. This left me conflicted however – I wasn’t a Commodore guy, but I had done a much better job on it than my beloved 800’s.

This year that all changed! Someone requested I build them an Atari 800 laptop, and I decided to go full out and not only beat my own C64, but make it perhaps my coolest project ever. 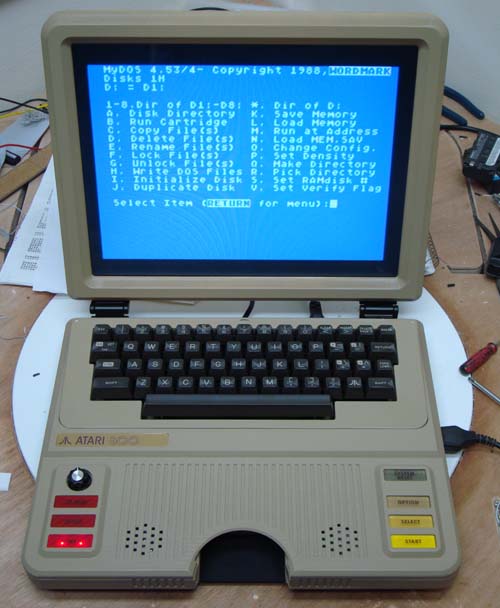 After about a month this is the result. Quick specs:

To see more pictures and read the Making Of, click below.

My next project shouldn’t come as a surprise… in fact, chances are SLIM you won’t be able to guess.

(All story links open in a new window for ease, so feel free to go nuts)

I’m sorry that I never do my overly complicated “making of” stories anymore… I guess I’d rather spend my energy talking about the project itself. 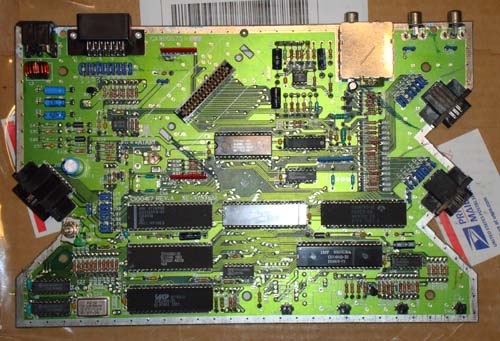 We start with an Atari XEGS motherboard. The XE Game System was Atari’s failed attempt to compete with the Nintendo and Sega Master System. Even though they had the technically superior Atari 7800, they decided to repackage the Atari 800 (again) into a game system. Granted the 7800 isn’t light years ahead of the 800, but its spite handling was certainly more advanced.

Rumor has it Atari just wanted a way device to sell their stockpiles of disk drives with. A noble failure, but great for the purposes of this project! Side note: the Atari XEGS manual actually lists the port pinouts in the manual, massive street cred there! 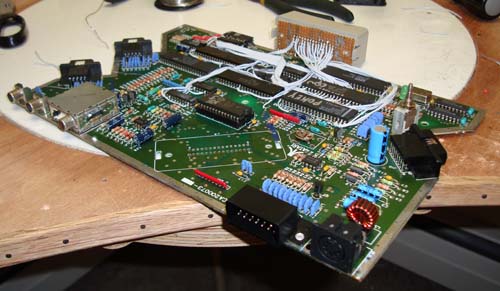 The first thing modded in is Mr Atari’s MyIDE interface. This allows you to hook a parallel IDE hard drive to the Atari and use it as a massive set of disks. The interface itself is pretty simple – a couple logic IC’s and a buffer – but the key is the custom OS (operating system) he wrote. Years ago Mr Atari wrote a modified version for the 800 laptop I was doing at that time, and again he was kind enough to send me the image for the latest revision. 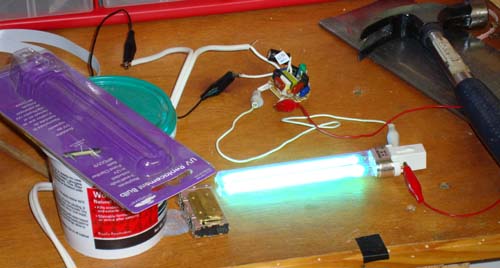 Got an EPROM off Digi-Key and my friend Chris Kraft (the guy who streams blood out of his mouth in Possumus Woman) helped me burn the ROM. We didn’t have a UV eraser. so Chris devised what you see above – it’s a compact flourescent bulb circuit running a UV lamp designed to kill bacteria in a fish tank. Chris mused “What’s the difference between this and a $90 UV eraser?” and I answered “$80”.

I also thought it might be fun to see if a tanning salon would “tan” the EPROM for me, but that seemed excessive. And probably would have been extremely slow.

With the EPROM burned the interface was ready to rock. The connections were wired to a header (I love headers) on the lower right. This goes to a connector that plugs into the hard drive.

Originally I was going to use Compact Flash again, but it’s becoming impossible to find small CF cards, and the 4 gig one I got at Hell-Mart didn’t work. So I went with a 4 gig 2.5″ IDE drive from an old hard drive. Having a removable drive with this setup is fairly useless anyway since it’s not FAT32 format and won’t do anything if you plug it into your PC. The data transfer is done with an SIO2PC cable. 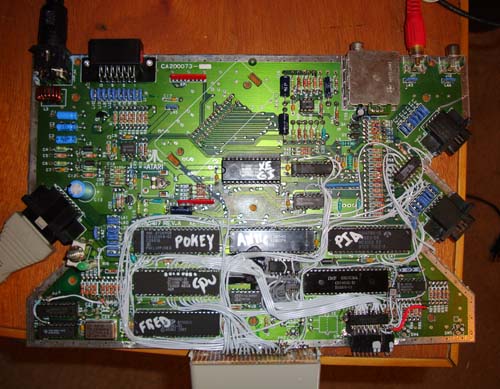 Next up was a RAM upgrade. This makes the Atari an official XE 130, I guess.  The guy who sold this to us said it was “very difficult, impossible, you’ll destroy the board, etc”. It actually wasn’t that hard, a fricking walk in the park compared to working on modern, multi-layer RoHS motherboards like the Xbox 360. God I miss lead… 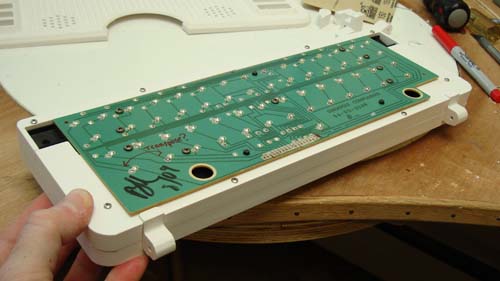 With the Atari rocking we move onto the case. The biggest design hurdle was including the original Atari 800 keyboard. It’s very thick and large, so the size of the overall unit was increased about 3/4″ from previous versions to include it. Making this keyboard work with the XEGS was not difficult, just had to decode how the ribbon cable was wired. Functionally they’re the same, it’s just that on the XEGS the multiplexer IC’s are in the detachable keyboard, and on the old machines they’re on the motherboard.

That’s the nice, predictable thing about engineers – they never change anything unless absolutely nessecary (unless they work for Sony) 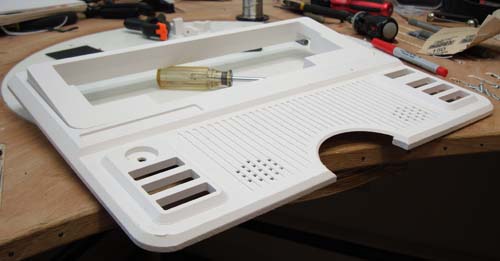 Next up is a gimmick I’ve been wanting to try for a while. See, laptop keyboard are flat, while desktop keyboards – including old computers – at tilted at a 10 degree angle. I thought “Why not have the keyboard pop up to replicate this”?

This was accomplished by making a separate “keyboard module” that fits into the main case via some homemade hinges. “Not making my own hinges” was a New Years resolution for me, but in this case I made an exception. When mounting the hinges, I spaced out the 4 sides of the keyboard module with stacks of Post-It notes (5 on the sides, 10 on the bottom, 5 on the top) so it would have the proper gap all around. 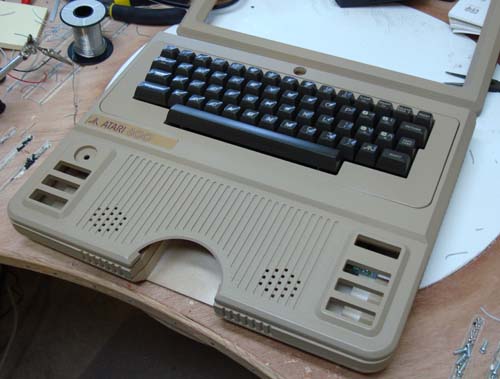 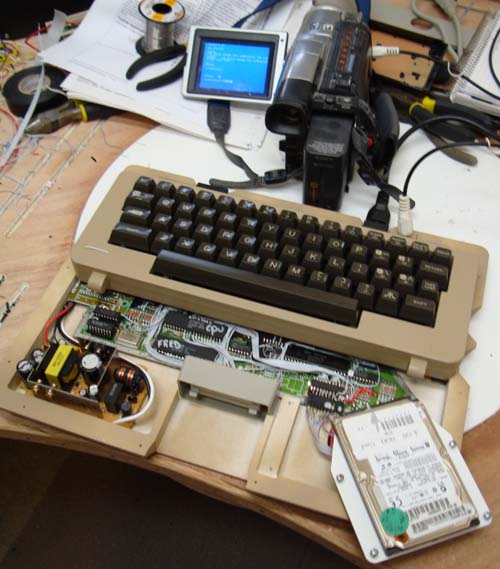 Testing the unit before I got the screen assembled, using my “Forever Camcorder”. Sony isn’t perfect, but if you ever want an example of die-hard electronics that camera is it. First used for “Lizard of Death” over 9 years ago, and the giant Li-Ion battery STILL holds a charge. After 9 years!

It was duct-taped to the front of a jet ski while filming Port Washington, sprayed with mist and kept working. It was strapped to the bottom of a truck for the kitten scene and kept working. Most amazing of all it has survived several airplane trips in checked baggage. It gets new scratches every trip (not sure how, but it does) yet keeps working. Go Sony! 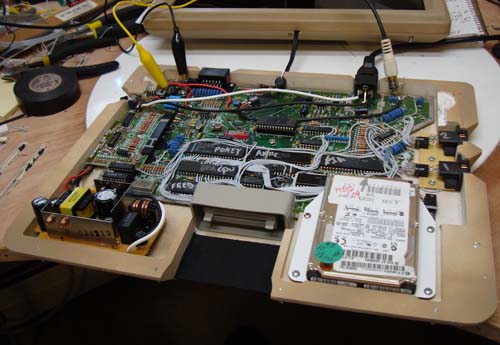 I used a Gamecube power supply for this unit. They are very useful – plentiful, cheap and provide 12 volts with 3+ amps of juice. However if you short circuit one it dies pretty fast, as I discovered. Photo above shows me testing if I just fried the PSU or everything. Funny thing is I don’t even panic – years of electronics has desensitized me to panic. It was just the PSU, so I grabbed a new one at Pre-Played. I bought 2 more actually, you can never have enough.

Here’s the final contents of the motherboard portion, all labeled. It might look simple and make one wonder why I charge so much, but believe me, it’s a thousand little things, and part of the skill is making it look simple and cohesive. You want a mess? Look at my old stuff – ug!

Note to modders – headers are your friend. Goto Digi-Key and search “male/female headers” and buy as many as you can afford. 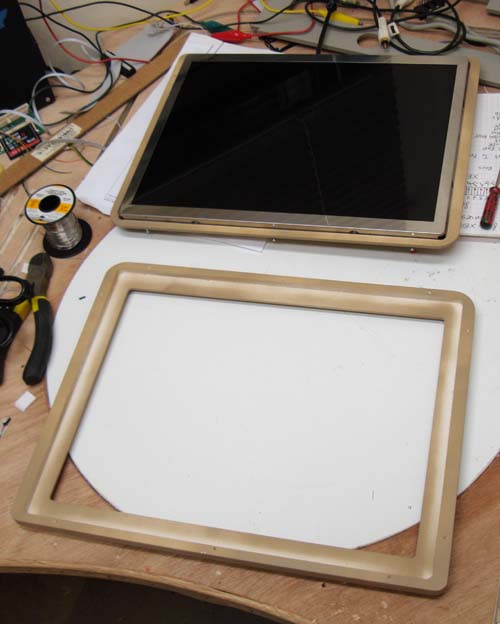 I used a 15″ 4:3 ratio LCD module from AEI Components, a company I cannot recommend enough. This is a similar model to the one used on the C64, but newer. The component video looks a lot better than it did on the C64 module, so I’m glad. In a rare twist, this LCD actually mounts to the top lid of the unit, and then this screws to the screen frame.

A video of myself testing the unit when all the parts first came together. If something is going to go wrong, this is usually where it happens. 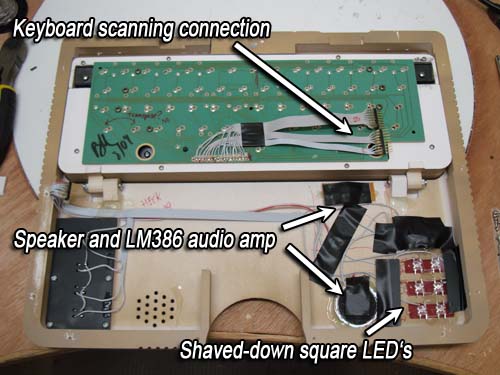 Here’s the insides of the keyboard layer. The “800 to XE” conversion is done from the cable to the keyboard… board – it’s basically a wire swap. If the pinout is useful to anyone I could draw up a decent looking one to post on the site.

Also seen here – the console buttons, faux speaker holes, real speaker, audio amp and LED indicators. As an homage to the original computer I used 2 LED’s per indicator. However I had to use flat LEDs, and even then Dremeled off the domes, so they’d fit above the PSU. But it was worth it to have an internal PSU, so no sweat. Volume control is a stanard carbon-film potentiometer. 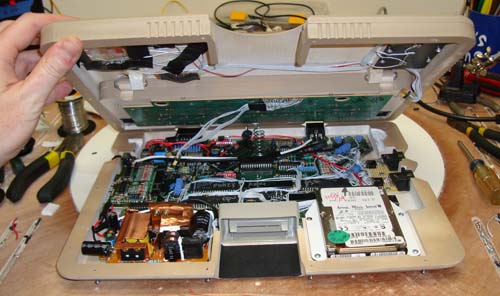 The “maw” view of the unit. It’s best to keep the connections between halves to a minimum – here we have the keyboard pins and the audio/console button/lights connector. Again, I cannot stress enough how great headers are – they aren’t free, or even that cheap, but it makes life so much easier. 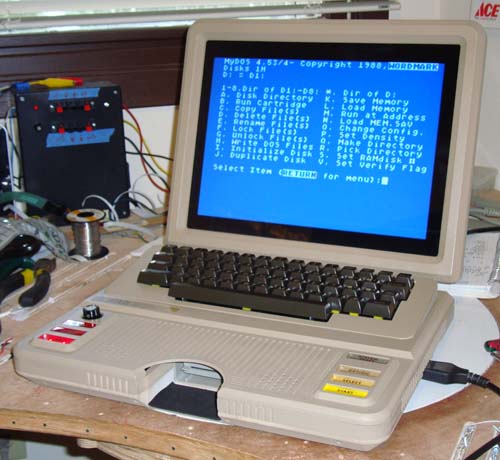 The MyIDE interface runs on the parallel data bus and is very fast. 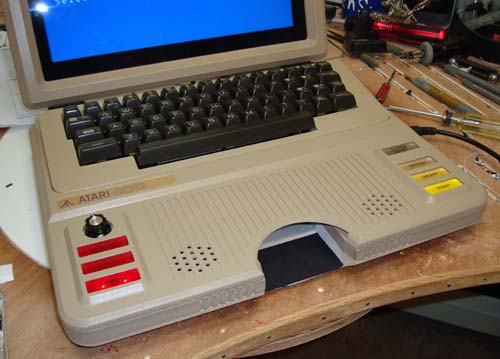 I carefully colored the System Reset, Option, Select and Start buttons to look like the original machine. The indicator lights on the left are for XE Ram, MyIDE access and Power. 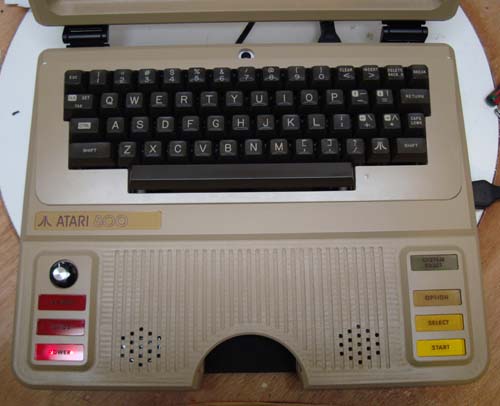 Top-down view of the keyboard area. The black circle at the top is a latch you slide back to release or lock down the keyboard, which is spring loaded. Putting this together felt like setting a bear trap! 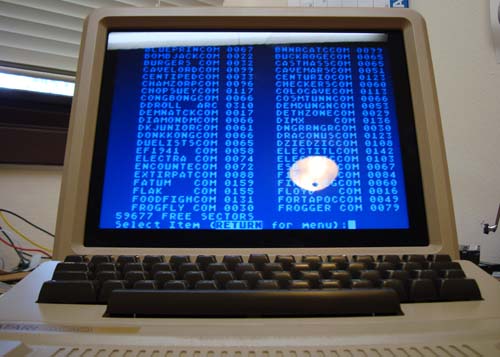 I like how this LCD has a gloss finish, rather than the typical matte. Looks sweet! 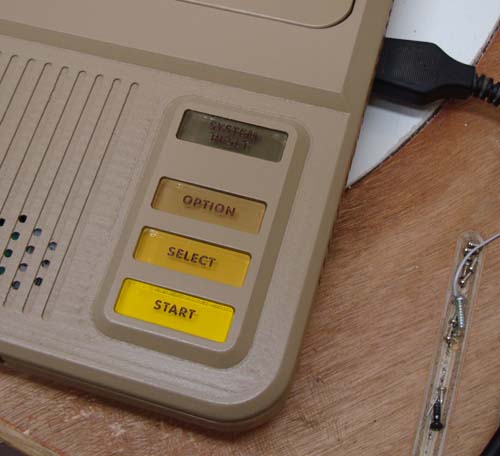 Close-up of the buttons. The coloring was as close as I could get. Note the multi-leveled / beveled surfaces – this takes a lot longer, but looks so cool! 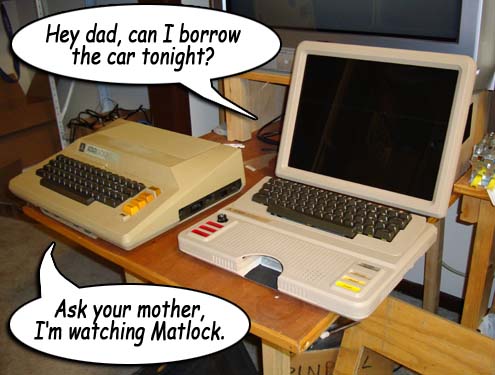 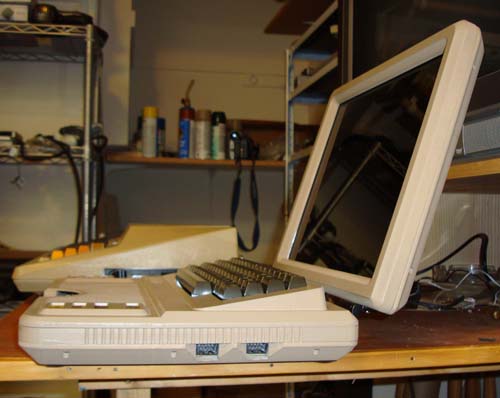 Note how the keyboards are at the same angle. I dug around for a protractor, but in the end I couldn’t find it so I just guessed 10 degrees of slope. Seems right. 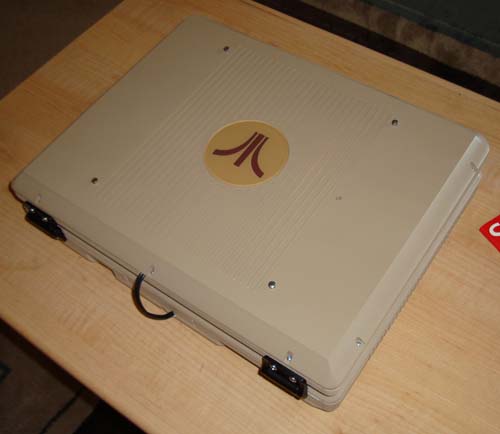 Unit when closed. I made an acrylic inlaid Atari logo. There are superfluous grooves on the top of the unit as well. They were big on that in the 80’s – sure it attracted dust, but it was more interesting looking than a blank case. 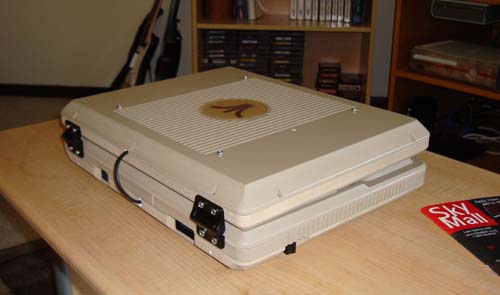 Side view. This unit is about 3″ thick, mostly because of the original Atari 800 keyboard. It was worth it! Once again I’ve used expensive-but-effective friction hinges from McMaster-Carr. 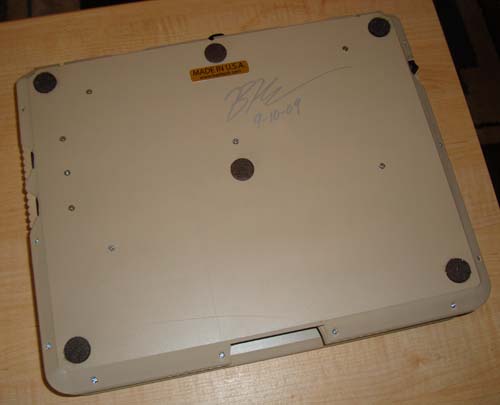 “Made in USA” – that’s right, somebody’s gotta build crap in this country, might as well be me! I also try and remember to sign things I build. Felt pads protect surfaces and keep the base level.

I’ll leave you with some demonstration videos, enjoy!

If you’d like a custom project like this for your very own, check out my Sales page for info on how it works. I am always up for new and interesting projects, so feel free to drop a line.