My latest project is the Xbox 360 Portable. Figured that was a more appropriate name than laptop, because seriously, who’d put this in their lap? It weighs almost as much as my sister’s cat. 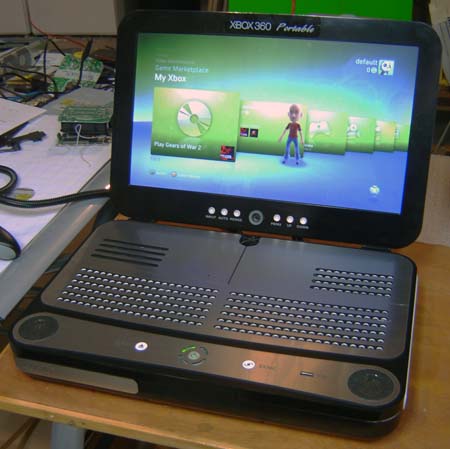 It differs from my past Xbox 360 laptops in several ways: 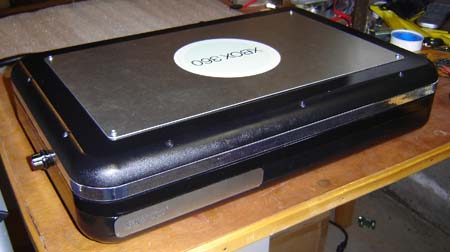 Containing the full-sized 360 hard drive caused this unit to be about 1/2″ thicker than past models.

For a bunch more photos and info please read the rest of the story below. The THQ Darksiders prize laptop is the same model as this one but covered with artwork of course.

This black unit was a commissioned model, as for new large-project orders I probably can’t take more until the spring. If you do wish to suggest a project to me remember weirder is always better! 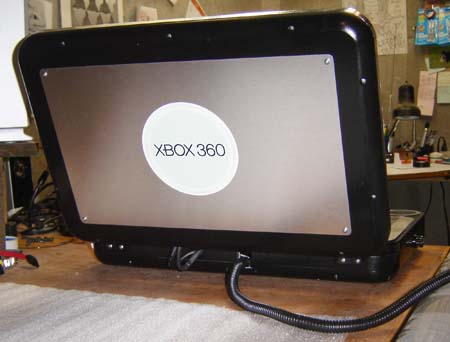 The unit when opened. There is a brushed aluminum plate on the back with the same Xbox 360 logo as some of my past projects. Originally this was going to be a blank black top (with logo) but I added the plate to cover up some pre-existing material scratches and to allow some “case gaps” behind the screen circuitry. 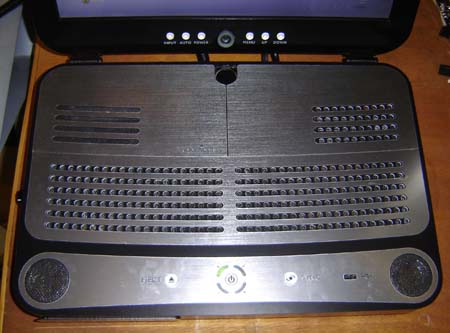 Inside of the unit. Again we have brushed aluminum, though this is the faux plastic kind. Still looks good. The keyboard has been replaced with something more important – lots of air holes. No keyboard also allows for the hard drive compartment… 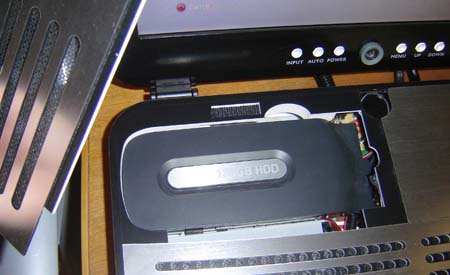 Lift the Velcro-secured upper left panel to reveal the full-sized hard drive. Looking back now a non-removable hard drive and no memory card access was a pretty stupid thing to omit on my past projects. I guess you live and learn. 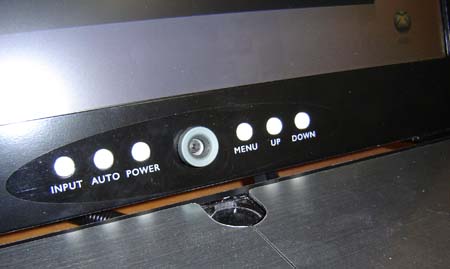 Once again we have an Xbox Live Vision camera. Truthfully I don’t know what the purpose of this thing is, other than to see grainy video of people contemplating UNO moves, but people seem to like it so it’s back again. The controls from the LCD are also present, so adjustments can be made if need be. 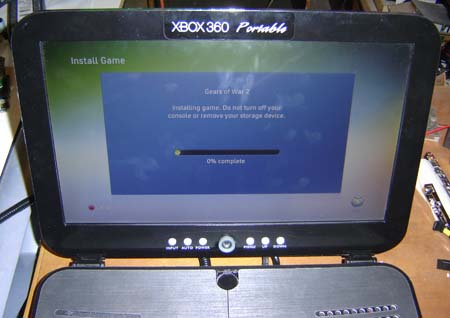 Installing Gears of War 2: Attack of the Giant Worm on the Xbox 360 Portable. Game installs are a great feature on NXE since they alleviate the need for the super-noisy DVD drive, which is even handier on a unit such as this. Reduces power consumption as well. 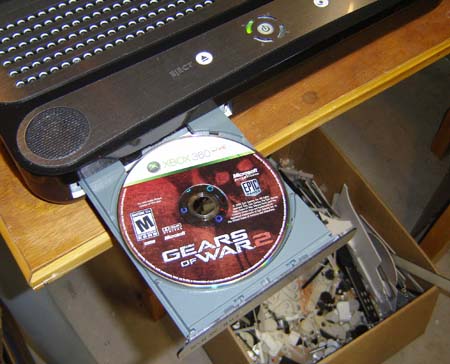 Noisy DVD tray ejected. You can see the eject button just above. This unit does not have an exposed IR sensor as with previous models. It’s a lot easier to have everything on one surface (such as the ring of light, buttons, USB port) than sticking out all over in random spots. 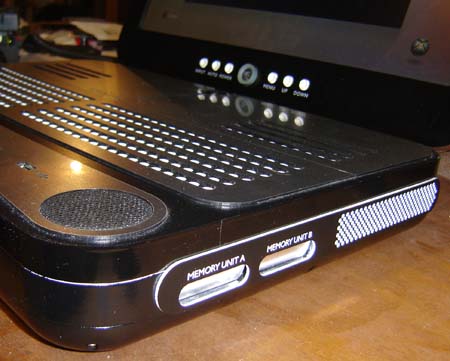 Memory card ports. Another way to easily transfer your data. You can really see the reflectivity of the fake brushed aluminum in this shot. 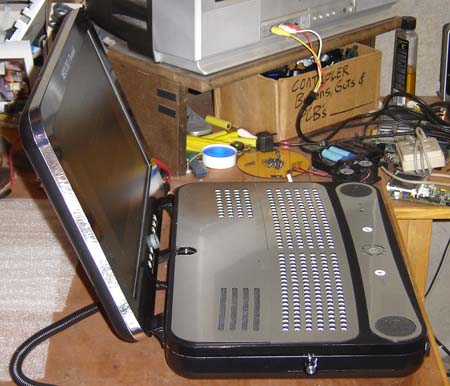 Side view of unit. There is silver trim as with the Playstation 3 portable. The basic theme of this unit is black and silver. A box of crap with “controller” misspelled is clearly visible in the background. 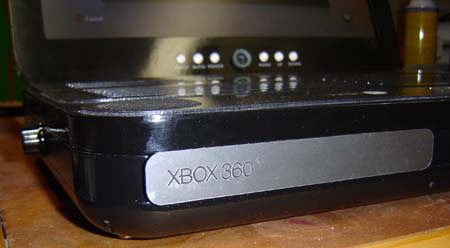 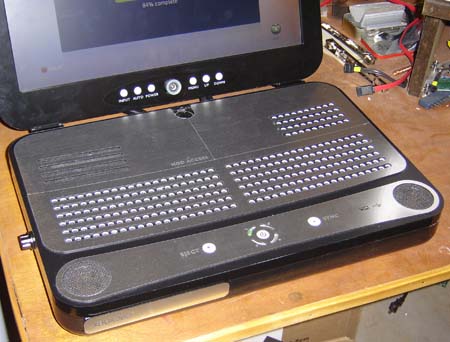 Main view of inside panel. It was very important to me that every vent hole was symmetrical to the ones on the other side. 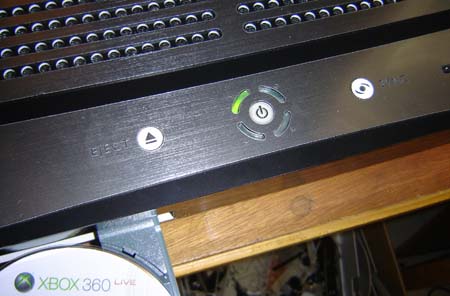 Ring of light, eject and sync buttons. Simple & symmetrical, the way I like it! 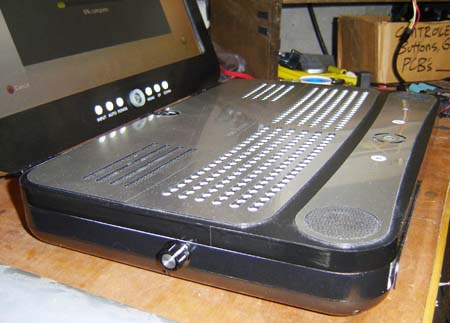 Volume control knob on side of unit drives built-in stereo speakers. The knob was very late in the design, so yes, it looks like an afterthought. 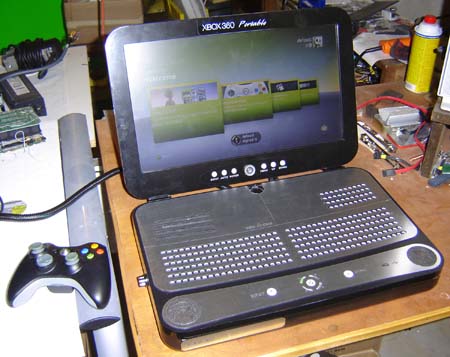 Main view of console that was a little too washed out to be used for the hero pic.

Yeah I know, in the olden days I used to do big ridiculous “making of” stories but I guess I am either too lazy or busy anymore to squeeze them out. Fear not, our Christmas Special podcast intro will be sweet. 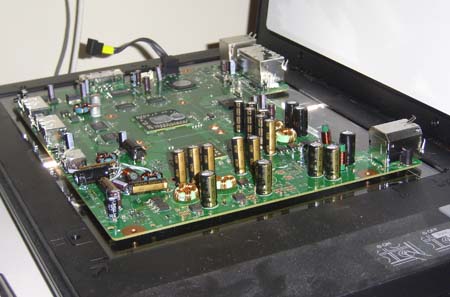 I usually start a project by ripping everything apart and scanning it into my computer, which is a PC by the way. Even though my Xbox laptops might similar they have all been designed from scratch.

As you can see in the photo above I am a big fan of scanners. See, if you scan something with Photoshop it will come in at actual size. Then, if you take said image into Illustrator (with which I do all my designing, and in 2D to boot) you can get an actual-size reference.

I usually don’t rely on the scan exclusively, rather I use to double-check my manual measurements, but it’s a good system. You can also print stuff at actual size and use it to double check your drawings against the parts. The Xbox 360 motherboard has changed slightly over the years, so it’s always good to check.

I have a decent sized library of parts drawn up from over the years, but occasionally I’ll get pissed and just draw something from scratch. However the “Portable” logo you see on some of my stuff, including this, dates back to the original Atari VCSp. 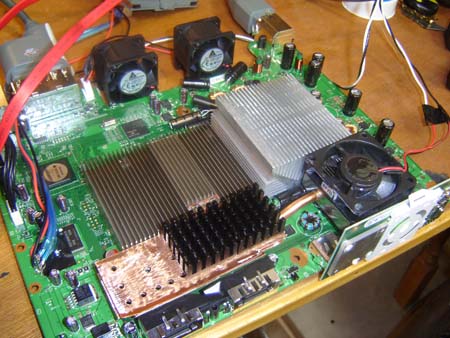 Here is the Xbox with the fans and heat sinks installed. Please note this isn’t the final layout but it’s the only photo I could find. The CPU heatsink (aluminum thing, right) has been “shaved down” to fit the case but gained some copper “wings” in the final product. Copper is expensive so you see less and less of it in every console revision, but these laptops are expensive so why not use it?

The pair of fans in the back are wired to the original 12 volt fan line, which has a variable speed as set by the console. The smaller fan up front exhales heat from the GPU heat pipe extension thing. 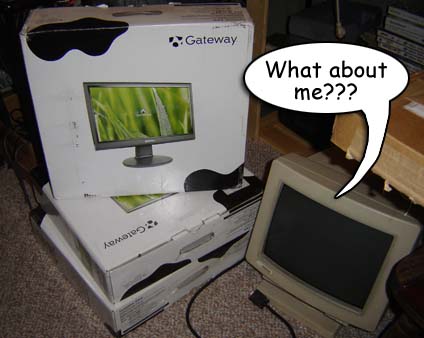 Once again I’ve used the Gateway 1775W LCD monitor. It’s not the most amazing thing on earth but I’m used to using it, know its quirks and of course all the parts are already drawn up in my computer. Also it has a resolution of exactly 1280×720 which allows a pixel-pefect 720p signal with no interpolation.

They have been discontinued it would seem so I ran to Circuit City one day and bought a bunch from their warehouse to at least get me through what projects I had on the burner. 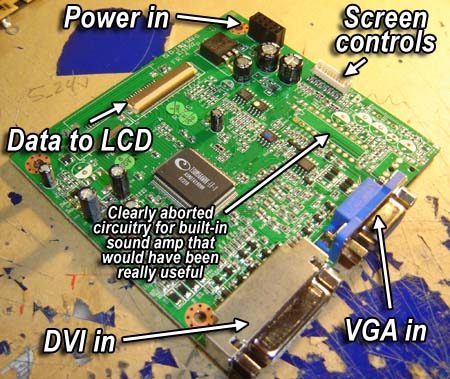 Here’s the driver board for the LCD. As you can see, some forward-thinking engineer planned to have an audio amplifier on this thing, but some corporate kiss-butt (yes, Twister reference, that’s right) must have taken it out. Oh well. Anyway, all we really need here is the DVI input, and of course we’ll have to have a power connection as well. This particular unit uses +5 and +12 volts. 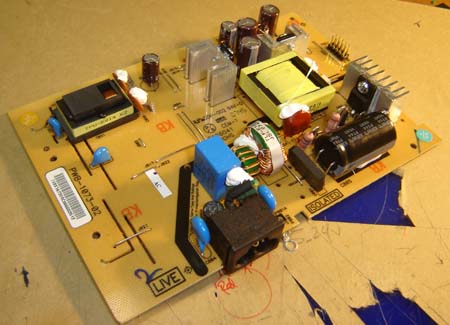 Do not touch any of this crap while the system is running!

These PSU’s should get a room already.

Here is the “360 laptop super-brick” before the lid put on. The LCD PSU is hacked up and still barely fits on top (stupid transformer) and the XBox 360 guts are below. (Don’t worry, the final product has insulation between the two halves) The AC input is shared between both PSU’s, and the power cord is modified to add the LCD power.

It could be POSSIBLE to run the LCD off the 360’s power supply directly, but that would probably be really pushing it. Actually, if you had a newer Jasper 360 unit, requiring 150w, but with an older 175w/203w power supply (giving you 25-50 spare watts on the 12 volt line) it might be possible. Hm, I just thought of that while typing this sentence… might be worth a try! 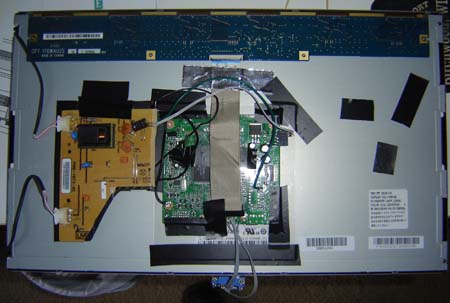 Notice the VGA port tacked on… this is usually for testing purposes.

Here is the back of the LCD with the driver and inverter boards wired back up. Yes, that is electrical tape but don’t worry, I’ve used a lot of it. Also very useful when doing these sorts of mods is thin plastic from packaging, like the back half of those infernal “blister packs”. I usually recycle (read: don’t have to buy) that sort of stuff and re-purpose it (read: recycle) for mods such as this. Plus I don’t drink soda from 2 liter bottles, so that plastic is never around (and if it was it’d be curvy and useless anyway!) 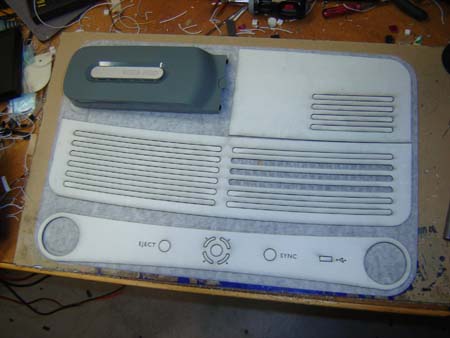 Much like a caterpiller in a cocoon, this looks like crap. But soon it shall be beautiful!

Above we see the first pieces of case cut out and slapped together to give me an idea of how it will look. It’s always a very satifying step when you start putting projects together and they actually look like something. Unless of course they end up looking bad, in which case you typically cry. 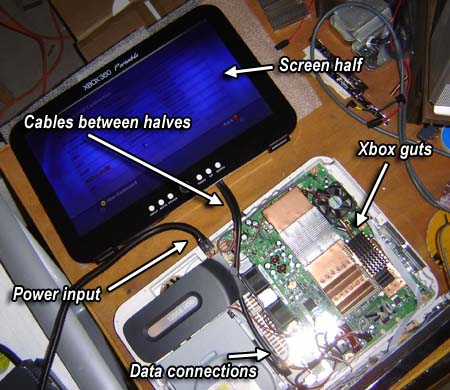 Here is the unit being tested for the first time. My homemade antenna was able to get my Wi-Fi in the basement, so that’s not too bad. It’s strung out inside the faceplate of the unit, kind of like a normal laptop, Wii, PS360 or old-school in-window car antenna (though apparently those are coming back?) 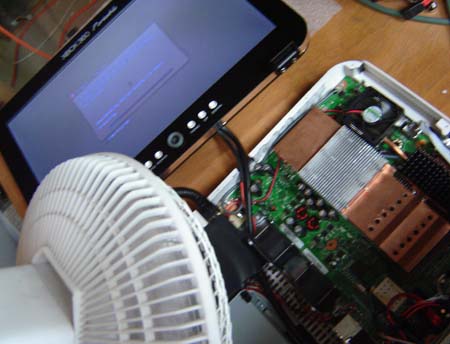 Of course the first thing the Xbox wanted to do was install NXE, so I ran a fan over the guts during the install process just to be safe. “Saving Data: Do Not Turn Off Console During the 2 Seconds This Message Appears!”

OK that’s about all I have for the Making Of. Be sure to stay tuned for the THQ Darksiders laptop, which will be exactly like this one but covered with artwork!