Here’s something done several months ago but just now showing up on the site – a response time test controller built for use by Infinity Ward for a new game they are working on. 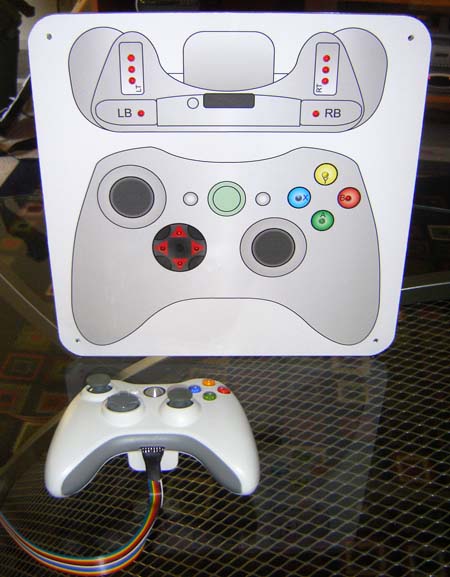 The idea behind this project was to build a system which shows the pressing of the buttons in a very obvious manner, in this case LED’s. The controller wiring is piggy-backed, and an extension port added to the bottom of it. This then connects to the main lightboard, indicating exactly when buttons are pushed.

The intent is that this is filmed for testing purposes to help identify the gap between when users are pressing buttons and when onscreen actions actually occur.

If you think something like this might be of use to your company, or have a similar idea, why not drop me a line?

For making-of info, sample videos and pics of the unit being tested, check out the rest of the story below. To read the original article that inspired the customer to have me create this, click here.

Back of the display board. There’s not a whole lot to it, so it’s quite thin. 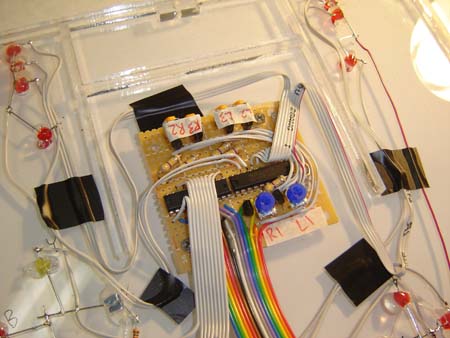 Close-up of the driver circuit. Newer Xbox 360 controllers use a simple active-low button scheme, and in this mod these signals are all sent to a pair of octal buffer/drivers (the 2 IC’s seen in the pic). The drivers send a “copy” of the input data to their output lines, ie, if pin 2 is LOW, corresponding output pin 18 is LOW and can trigger an LED.

This allows an isolation from the Xbox 360 controller functions themselves, probably a bit over-engineered but the IC’s are cheap enough so who cares? The lightboard itself is powered by the controller’s 3.3 volt accessory line (where the chat pad hooks up) so it powers on when the controller does. 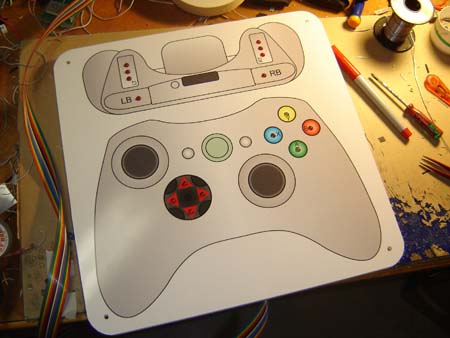 The lightboard itself is just a piece of laser-cut acrylic with a graphic slapped over it. It is 200% the size of a normal controller, allowing for easy videotaping. The LED’s on the 4 main buttons are the same color as the buttons themselves, just to make things a little more obvious. (The rest of the LED’s are red because that’s the cheapest color 🙂 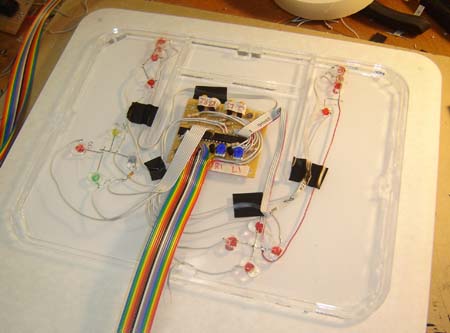 Kind of like an old air traffic control board, in a way.

Testing digital button outputs. This was quite simple… again had I used an older Xbox 360 controller it would be a different story.

Testing analog shoulder button bar graph. This was a little trickier… I ended up making a resistor ladder to convert the analog signal to a digital (progressive) LED layout. Using potentiometers (as the resistors) allowed me to dial in on the correct settings, and also adjust it so it wouldn’t interfere with the data going back to the Xbox.

Testing controller with Grand Theft Auto 4, which was the hotness at the time of construction. That plant in the background has since died, unfortunately. Apparently the TV didn’t provide it enough light or something…