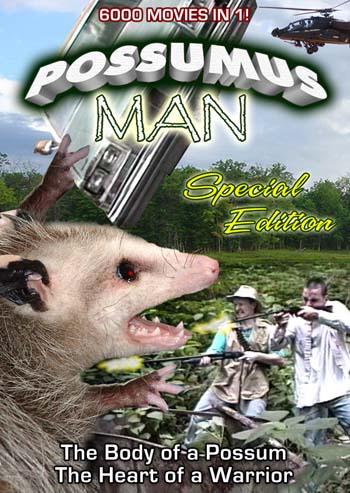 What is Possumus Man, you might ask? Well long before I was famous for doing whatever it is I do, my hobby was independent film. (A hobby I’d like to get back into) In 1995 I had a mad urge to make a “killer creature” movie, and one about a giant killer possum was the result.

Problem was, as a cocky 19 year old, I thought I knew everything about making a movie. Possumus Man was filmed fairly sloppily, with usually only 1 take for anything, and edited “in-camera” using the amazing Sony edit-search buttons. (Yes, even back then I was a Sony fan-boy) Making matters worse we had no real editing equipment, so it was all done camera-to-VCR, pause-record, and vice-versa. There were some primitive computer effects, done using CorelPaint on a 486 upgraded to a Pentium 90, but not much. All in all it was never the way I intended (coherent) and I’ve always wanted to re-edit the darn thing, if only to finally put it to rest.

Now in this brave year 2007 I have! Work is nearly complete on “Possumus Man: Special Edition” which is now fairly watchable due to non-linear computer editing, vastly improved sound and music, and of course 12 extra years of movie-making experience. DVD copies are being made for my friends, everyone else will be able to download it from this site. After cutting the fat it’s only 30 minutes long, so it won’t waste too much of your life.