Take a look at this shocking photo that Sony doesn’t want you to see: 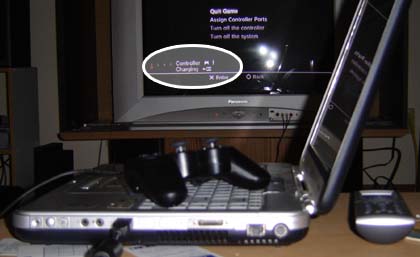 Here’s the story – so I plunk down to play Resistance online, right? (Which is a lot of fun I must say) But the PS3 wireless controller is reading “low battery”… even though it had been plugged into the PS3 via the cord overnight. Apparently it only charges when the console is ON. That’s… interesting, but the cord is quite short so it’s kind of hard to play (corded up) while charging.

Since [the controller] has a standard digital-camera style USB cable I figured the charging must occur via the +5 volt line so I sat my laptop on the coffee table (which was closer to my chair than the PS3) and plugged the SIXAXIS into that. Lo and behold it began charging the controller, and I could play the game wirelessly while it did.

While I am definitely not in the “Sony is doomed!” / “Wii60!” camp, I must say this controller thing is kind of lame. A lot of devices keep a +5 volt supply on the USB rail even when when main power is off, it’s odd that the PS3 doesn’t. Especially since it’s used to charge the controller.

Morale of the story – if you want to charge your PS3 controller overnight, plug it into the Xbox 360 or Wii’s USB ports – they have constant voltage, even in off mode (or “orange LED” standby on the Wii.)Â Even a lot of computers keep +5 volts on the USB hot. Weird. I should do more testing, but off the cuff this looks like another Sony misstep.

21 thoughts on “PS3 Controller – charged by anything but PS3?”