UPDATE: Yippee, once again my site has been crashed! And that’s even before the new mod I have coming soon… As for the price of this mod, well, it’s a lot. When I do the second one it’ll be easier and I’ll have a better idea, but definately still hundreds of dollars at least. Plus I am kind of busy and won’t likely have time to do many more anyway. Sigh. Maybe I can do a How-To for Engadget on it? 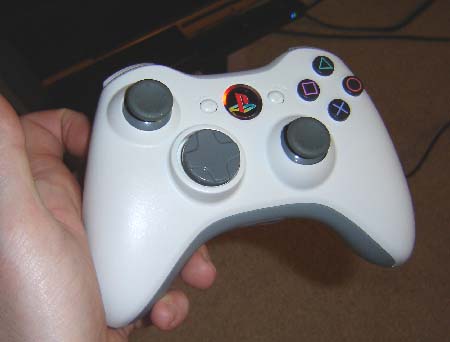 Done on consignment, it’s quite obviously PS3 Sixaxis controller guts in the [much better shaped] Xbox 360 controller shell. Check out a video of this thing in action, and see below for more photos and details of how it was constructed.

Truly one of the stranger requests I’ve had for a project (the person actually ordered 2, this is the first of them), but hey, if you’ve got the money I’ve got the time. 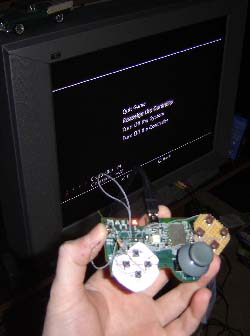 An early test of the guts. I’ve rewired many a Sony controller in the past, but it’s always good to check if things are working. Of course this time I’ll have to deal with the “analog” L2 and R2 buttons of the Sixaxis… 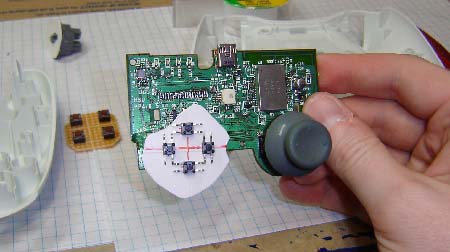 A better view of the main PCB in the Sixaxis. Amazingly, it’s exactly the same shape and size as a Dual Shock board. The actual “tilt” device is a little IC at the end of a cord, not much too look at. On the original Sixaxis / Dual Shock most of the trigger buttons are on a plastic sheet set against a separate plastic frame, much like a keyboard is inside. Again I say, why didn’t they update the controller this time? I mean, a REAL change? It’s getting pretty pathetic… 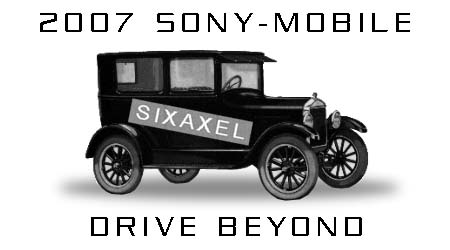 If Sony made cars. 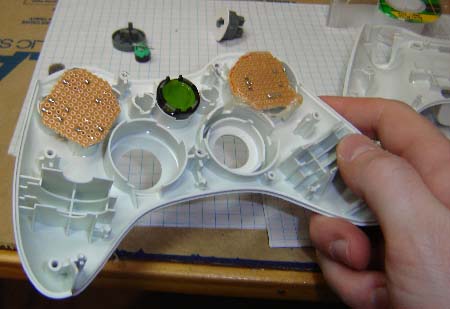 Here’s the inside of the 360 shell. As you can see I’ve used standard-issue Radio Shack perfboard for both the action buttons and the left analog stick. OK the Sixaxis is a little different, it uses slightly smaller analog sticks than the Dual Shock or Xbox 360. Well, they’re smaller on the inside at least, kind of like the Gamecube. 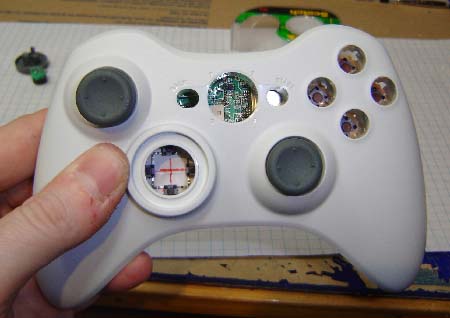 The controller shell with the circuit board and new tact switches for the d-pad visible. Unfortunately I had to keep the wanky 360 d-pad, oh well. 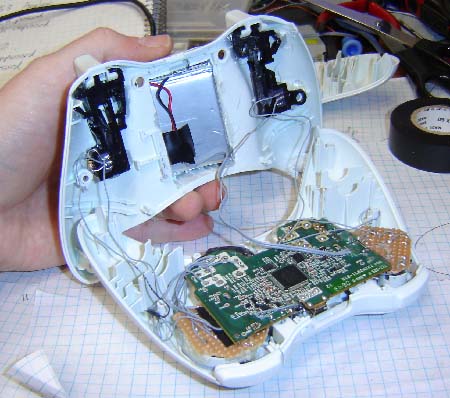 Here’s the insides finished and ready to go. The Sixaxis battery has been taken out of its shell and crammed into the back battery area of the 360 controller. The left and right analog sticks from the 360 are kept stock and a resistor adjusts them to work with the PS3. It may not look like much but there was a good deal of finangling to get everything to fit and work correctly, especially the right analog stick. (Left at its original position on the PCB, but lifted .075″) 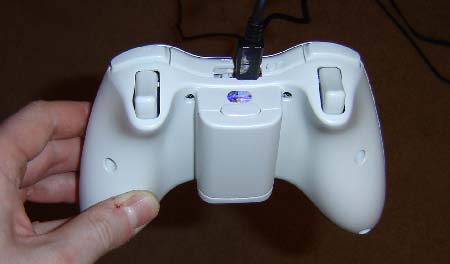 The top/back of the unit. The USB cable plugs in where the Charge and Play port used to be. Luckily the Microsoft hologram sticker is there, letting you know at least the case plastic is genuine.

A closer view of the buttons. Unlike Sony’s Sixaxis I took the effort to use a COLOR “PS” logo, thank you very much. The action buttons “more or less” fit the holes in the 360 controller, a little shaving on their sides sealed the deal. I should just graft an X-Acto knife to my arm, I use them enough. 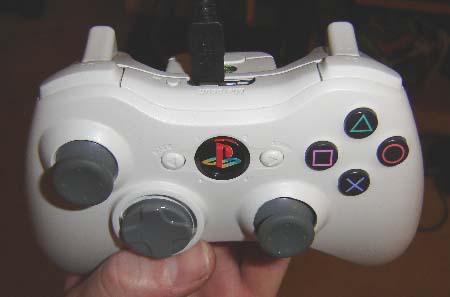 Another view of the top. The USB cable plugs in a little off center, but I can live with it. In the video you can see the Ring of Light with the new red LED’s… sure to strike fear into Xbox 360 owners the world over!

Well that’s about all I have to say about this mod/hack. I’d best get back to some other projects, so I’ll see you all later!