Behold my second and (unless someone gives me Miller Brewing company) last Xbox 360 Laptop! 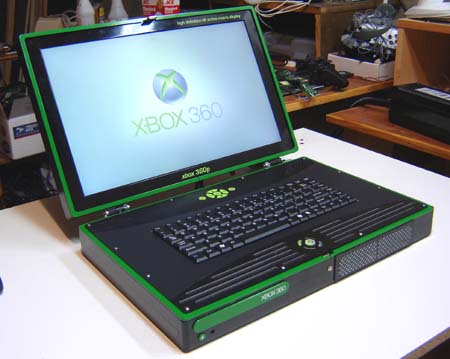 Similar to the first model but redesigned in many ways. “Uses 60% Less Aluminum!”

For a full photo gallery and more info please see the article over on Engadget.com. The bonus with this project is that I’ve documented the construction in a fair amount of detail and will be doing a 3 part “How To” also on Engadget, as unsurprising as that may seem. It’ll include art files and diagrams, so you can take a crack at modding a 360 on your own!

Enjoy the photos and imagine yourself playing 360 by the pool surrounded by supermodels, but don’t rush to send me emails offered to trade in 5 Game Gears for this thing as I do not plan to build any more of these on consignment. (I am selling Atari 2600 Rev 5.1’s though!) It just takes to darn long, and I don’t have enough limbs to build enough for the demand. Sometimes I wish I could fall prey to an experiment gone wrong and wake up with 4 extra, hopefully metallic, robotic arms, but that probably won’t happen anytime soon so I’m sorry… However if you are carrying out any dangerous experiments that might result in appendage appending let me know.

But fear not – I’ve got loads of other projects on my backburners so they’ll be plenty of new stuff to check out on benheck.com in the near future. As always, stay tuned!