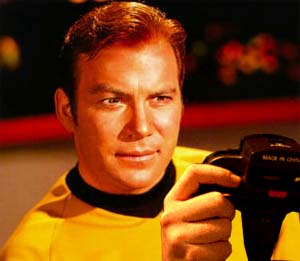 A bunch of us went and saw the new Star Trek movie on Sunday. I think there were around 10 of us, which is kind of a large number of people to get to go see a movie at once, especially Star Trek. Maybe Paramount has less to worry about with its “mass appeal” than it thought!

Something special about this movie is that you can tell within just a few minutes that it’s gonna be good. It reminded me of the first time I saw the Matrix, Agent Smith says “No Lieutenant, your men are already dead…”  or more appropriately the beginning of Finding Nemo, where the movie’s barely started, a mass fish egg genocide has occurred and you’re already feeling an emotional attachment to the characters.

My short review is that it kicked ass, with only a few quibbles. For a longer review and better reasons to see it, read on below!

Personally I am a big fan of the original series, the movies with the original cast, and the first 2 Next Generation movies. Deep Space Nine, Voyager, Enterprise, don’t give a crap. So I was pretty excited to see a movie that involved the originally COOLEST crew, in younger form.

Let’s face it – the Next Generation crew are a bunch of boring, by-the-book Federation brown-nosers. “Oh no, we can’t violate the Prime Directive!” “Let’s sit around and talk about Milton for 20 minutes!” “The Klingons are our FRIENDS” “Endless Moby Dick References!”

The old show though was great. Sure they still had rules, I guess, but most of they time they just went for it:

“Shit, Bones jumped into the Guardian of Forever! We’d better get in there!”

“Go ahead and build your damn vacuum-tube computer Spock, I’m gonna mack on this piece of 1930’s ass.”

“Here’s a formula for transparent aluminum, it’s ok because you probably invented it anyway”

However even with the rampant disregard for, well, everything, they made a lot of interesting social statements along the way. The cheesiness of the show/effects/sets/planets with horizons 30 feet from the camera also added to the charm.

The new Star Trek movie contains all of the reckless glee of the old show and that’s one of the things that makes it so great. Kirk starts bar fights, hits on anything female, wrecks cars… all sorts of great stuff.

A very good example of this recklessness – and why this movie pisses all over ANY of the Star Wars prequels – is the “Kobiashi Maru” test scene. See, all Trek fans know what the test is, saw pre-Jenny Craig/Cheers Kristy Alley fail at it, and know that Kirk cheated to win. It’s part of the lore, and we can all probably guess how it went, but to see it unfold onscreen was immensely satifiying.

Compare this to “Oh, so that’s how Obi-Wan met Anakin… snore” “That’s where Boba Fett’s helmet came from… yawn.” Nothing George Lucas did in the prequels could match the imaginations of us as little kids making our Star Wars figures beat each other up in the sandbox… whereas in the new Trek Kirk acing the “unbeatable” Kobiashi Maru test is still interesting, cool and funny despite us knowing the outcome.

Chris Pine really nails it as James T Kirk, and wisely plays James T Kirk and not William Shatner. That’s not a dig on Shatner, I think he’s awesome. But Pine makes the role his own, allowing his character to grow into it, even if his ascension to captain seems a bit fast (the movie wisely jump-cuts past 3 years of them at Starfleet Academy, lest the movie become “Harry Potter In Space”)

Karl Urban as “Bones”, however, basically impersonates DeForest Kelly and that’s fine because he f’ing nails it – every line out of his mouth is vintage Bones and kicks ass. Unfortunately no one dies right in front of him, robbing us of one potential classic line, but there is of course the obligatory “I’m a doctor, not a BLANK!” (physicist I believe).

Other performances are fine – Simon Pegg as Scotty is basically comic relief but that’s OK, and of course at one point he “gives her alla I got, captain!”. Yeah! Uhura has a LOT of screen time, which doesn’t make a whole lot of sense until one realizes that she’s pretty much the only woman on the crew. There’s a fairly gratuitous scene of her down to a bra and panties – pointless, sure, but you know wouldn’t most of us rather see that than a once-again-nearly-naked-for-no-reason Will Ferrel?

The plot, like all great Star Trek, of course involves time travel. To be fair the plot is one of the movie’s weaker points but it’s kind of like wearing a ratty t-shirt under an awesome sweater -who cares? Some have found issue with the fact that the time-travelling bad guy actually CHANGES the future and thus “wipes clean” the future of Star Trek – oh, the blashemy!

I say – WHO CARES? The series was deader than sin in heaven anyway and needed a reboot. Besides, for all the times a Star Trek plot involved time travel it never ONCE caused any change in the future. They go back, stop or allow something to happen (or get whales) and come back all hunky-dory. It flies against paradox time travel rules, causality, “stepping on a butterfly stops evolution”, pretty much any theory of time travel, movie or otherwise.

Back to the Future, great example of great writing. Marty ACCIDENTALLY goes back in time (no paradoxes based off intention), then ACCIDENTALLY keeps his parents from meeting. Thus, he starts to no longer exist, until he actively helps his dad become an ass-kicker. Result – he returns Back to the Future (we have a title) and his father’s life is much better. Doc reveals he wore a bulletproof vest – thus Marty still thinks he died and runs for it. Perfect. Star Trek has never had time travel plots that airtight, so it’s about goddamn time the future changes on them.

Sorry if my review isn’t very well structured, “Dammit, I’m a modder, not a movie critic!”

Basically this movie rocks all around, so I’ll address the few weak parts. The 10 year old Kirk wrecking a car scene is kind of lame but it’s meant to serve as a counterpoint to Spock’s upbrining. The Vulcan school bullies are hilarious – Spock “The usual insults I presume?” Bullies – “Affirmitive”

Probably the worst scene is Kirk running around an ice planet (moon?) being chased by a creature, who is eaten by a bigger creature, who then also chases Kirk. Imagine the “Always a bigger fish” crap in Episode 1, but with snow. Easily 2 minutes of utter uselessness, why not spend the FX budget elsewhere? Oh well.

Overall anyone with any interest in sci-fi, Star Trek, space, explosions, green alien chicks, phasers, William Shatner or JJ “So Far, So Awesome” Abrhams should give this movie a go. Highly recommended, and when Hollywood makes something good for a change it should be supported.

Having only seen it once I would put this new movie a spot below “Wrath of Khan” for overall Trek quality. Khan had a much better villain, a much better score (Goldsmith>Horner>Giachinno) and Spock’s death scene is just as emotional as new Trek’s opening. We’ll see how it does on repeat viewing, I’d like to see it in the theatre again, if that tells you anything!