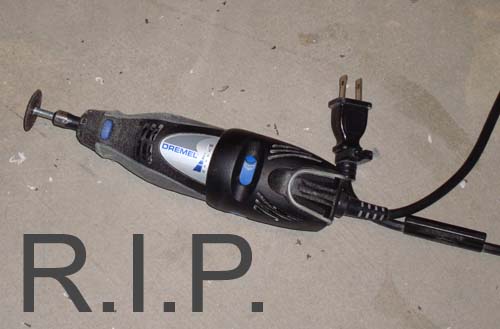 Well the day has finally come. After 2.75 years of faithful service, my first Dremel has bought the farm.

For a few months now the variable speed switch has been erratic, only going to the lowest speed, requiring a shove to get higher. Now the switch is totally dead, and the Dremel’s days are over.

Even though 99.99% of the time I only use it for the cutoff wheel, the Dremel has been an invaluable tool in my quest to do whatever it is I do. It has worked on every project of mine since the first 2006 Xbox 360 laptop, and finally conked out during the dual builds of the final THQ laptop and the long-suffering original hardware C64 portable.

All is not lost, however. Dremel is a Wisconsin company so I had no reservations about buying a new one. I also bought it at the local Ace Hardware store and not the Farm & Fleet… even though this support strategy didn’t work for Circuit City I’m hoping it’ll keep the local Ace open.