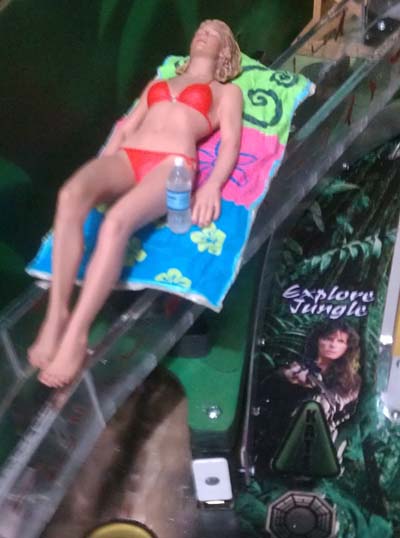 McFarlane’s “Lost” action figures allowed us to increase the bikini content of this pinball machine 175% over previous models.

Team Heckendorn has been working furiously on “Lost” pinball for several months now, with the goal of having a playable game at the Chicago Expo. Through our tireless efforts and backbreaking work. this goal will be a reality, unless a meteor strikes the Midwest or something.

Not only can you play the game, but you can enjoy our seminar “Godzilla Gets Lost in the Big Juicy Melons” at 3:30 on Friday, featuring Dennis Nordman, Greg Freres,  Chuck Emery and myself, speaking about homebrew pinball.

“Lost” easily surpasses “Bill Paxton Pinball” (which we may also bring) as the most complicated project I’ve ever built. It contains:

Hope to see you all there!

Charms & Pendants: charms.
Want to discuss a project for your company, personal use or promotional needs?