For the last year or so talk of the new, fabled 65nm Xbox 360’s have circulated the interwebs. Now – in this brave year 2008 – I have installed one of these newerÂ  360’s in a laptop-type enviroment, to replace a Zephyr Elite I had been using. 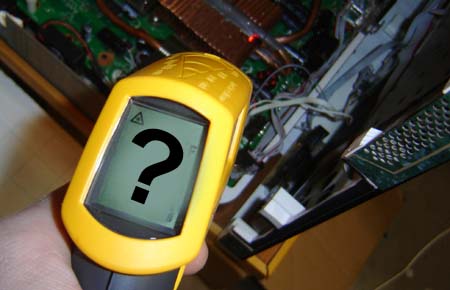 What will Ben find? And at what temperature?

For a temperate-difference breakdown – done in an incredibly scientific manner as usual – see the rest of this article.

My interest in this subject stems from the fact I was having overheat issues with the newest Xbox 360 laptop, which is based on a 2007 model Elite with what is called the “Zephyr” motherboard. Even with the new heatpipe-laden GPU and my “one pound of copper CPU ‘sink” it would get too hot after about 15 minutes. Part of this is of course my fault, case design, but I figured newer, cooler chips couldn’t hurt. (I could always turn the old Elite MB into a planter or something)

After reading up on the subject of how to locate a 65nm Xbox 360 “Falcon” (which I won’t get into here since I’m sure you all have Google access) I purchased one and promptly tore it apart. There is definately a parts reduction going on, mostly in the power supply side of things, both on the motherboard and the PSU itself. The PSU is now rated 175 watts (down from 203) and is a bit lighter, with a thinner, non-shielded power cord. Which is nice, considering the old cord was similar in girth to the Trans Atlantic Cable.

Xenon: Original style Xbox 360 motherboard. Launch, and up until early 2007.
Zephyr: The newer board that came with the Elite and has HDMI. Usually has the new GPU heatsink as well.
Falcon: The newest Xbox 360 MB. Has a 65nm CPU with a much simpler aluminum heatsink on it. (Versus the old copper-steel-heatpipe model)

OK down to business. With the Falcon MB modded to fit in the case and all the crap attached I fired the puppy up… After about 30 minutes of shooting grubs in “Gears” and hearing Bender say “Niiceee…” here’s what I found: 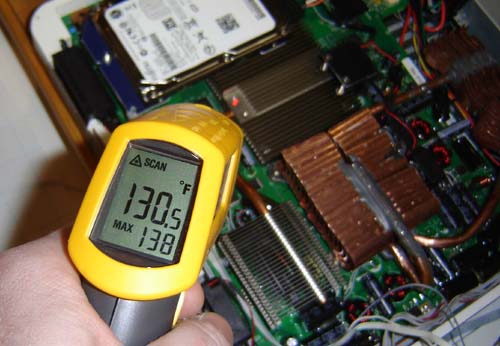 Using a device like this makes me feel like a cross between Spock and the Terminator. Which is fine.

The hottest visible spot on these heatsinks is an area I like to call the “crotch” – where the heatpipe emerges from the base of the ‘sink. (There is doubtlessly a technical term for this location but I don’t care) Anyway, word on the street is that the GPU remains 90nm, and this seems to be the case. At peak it was reading about 140 degrees, which is in line with the Elite Zephyr MB. So in this laptop I think I’d like to shore up the cooling for the GPU more than the CPU because… 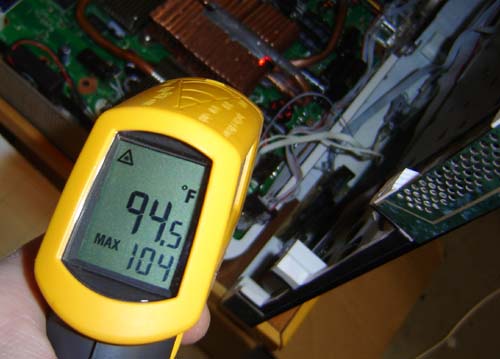 …the CPU runs a lot cooler than it used to.Â  Even after 30 minutes the crotch of my “super copper heatsink” only got to about 110 degrees. This is in contrast to the Zephyr which easily got up to the 150’s at this same spot, with the same heatsink, and then of course shut itself down. (2 red lights error). Going by my “biological” test, which is of course to touch it, it only feels warm to the touch, whereas before it was pretty hot. Granted the stock CPU heatsink never felt all that warm in the old models (probably because it didn’t have much surface area) but in this test, same heatsink, different boards, it’s a huge difference. 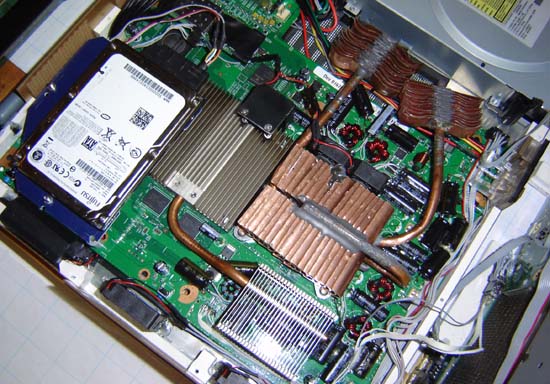 The motherboard area of the new Xbox 360 laptop.

So that’s pretty much what I’ve found thus far. The newest Xbox 360’s have a large heat reduction from the older models, but it is all in the CPU as far as I can tell. Once the GPU goes 65nm (hopefully this year) the thing will be so cool it will no longer double as a space heater. Still, as-is, it’s a great step forward. Hopefully this is further proof that the Xbox 360 is improving and those of you on the fence should just buy one already! Discuss how to find the newest models below… (I’ll let you slueth it out)

Here’s also hoping I can finish up this laptop and show it on the site. Everything is done but the heat issue, and it’s quite the looker.