Gus Douboulidis sent in the following entry, his description follows: 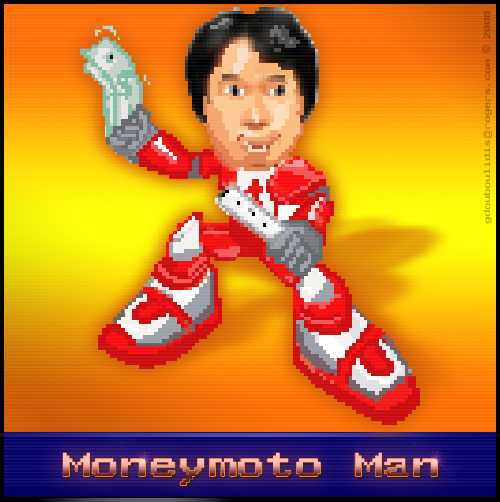 Moneymoto Man shoot dollar bills at you and likes to beat you over the head with the wii moto. Weakness – When he hits you 3 times consecutively he turns around and starts counting his endless supply of money.  This is when you need to sneak up on him and hit his wii moto(which is dangling from his arm).  Sending a bolt of electricity through his body, he drops his money and frantically picks up hundreds of dollars… this is your opportunity to shoot at him as much as possible before he realizes he’s getting hit.

I had a couple Wii-centric entries, but I picked this one because it had the best rendered “pixel art”. Congratulations Gus!

In other news, hopefully we’ll get back to our normal podcast schedule soon… though it’s likely we won’t have a new intro until the Christmas special. Regardless, stay tuned! Should have some new projects up in the next few weeks as well.