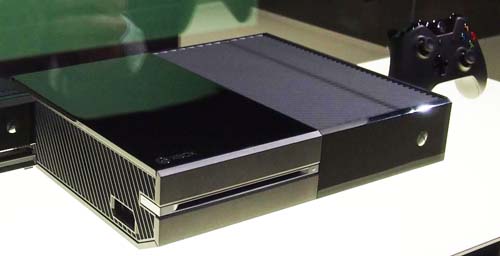 MS showed us a lot more in their reveal than Sony did, and by that I mean the actual console and even the insides of it. The guts are almost exactly the same layout as the current Xbox Slim, except the heatsink is larger (they’re taking no chances this time) and it’s a slot-loading slimmer Blu-Ray driver rather than the clunky full-sized PC-style 5 1/4 DVD drive.

Here’s what I see by looking at the photos from Wired:

MS used a lot of buzzwords in their speech today, none of which matter because the big question on everyone’s mind right now is “Can it play used games?”

Here’s my guess for how it will work:

Used games sales are one of those “can’t see the forest for the trees” situations. For decades publishers worried about piracy, all the while Gamestop was cleaning up with the used market. Suddenly there’s this new, phantom menace and it’s not the one you spent so much time worrying about. See also: Concern about kids playing violent games when the real issue is childhood obesity caused by a sedentary lifestyle. (Soda doesn’t make you fat, Soda + Inactivity does)

If [anywhere but South Korea]’s internet was up to the task, we’d have download-only console already, completing solving the used game “problem”. But we’re not there yet, so we’ve got to deal with a disc/interest based solution. Cracking down on used sales is one of those “who blinks first” scenarios, and it looks like MS just blinked. Don’t go rushing to PS4 in revenge just yet, because in their desire to be publisher-friendly (adios Cell!) they’ve probably done the same.

Here are my hopes for this new console:

11 thoughts on “Xbox One Thoughts”