This month marks the 10 year anniversary of my work on the web! While the original VCSp was done in spring of 2000, the original GeoCities site itself wasn’t created until the fall. Shortly after, it moved to Classicgaming.com where it stayed until spring of 2004, when I started my own domain “Benheck.com”. I went with that name because it was an available 7 letter dot com – couldn’t pass it up! Little did I realize I was creating my new nickname. Oh well.

It’s been a long, interesting journey since then and I’d like to thank everyone who supported me along the way and bought my products. 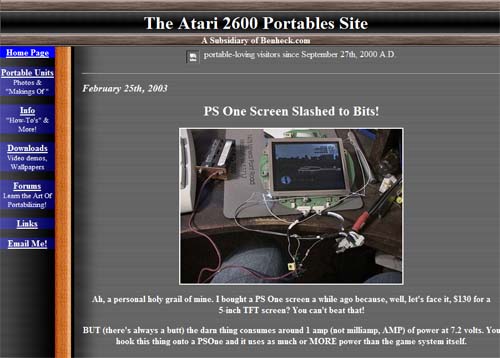 Stay tuned next weekend for the reveal of the new XBox 360 Slim laptop (and watch my show to see how we built it).

For a personal list of what I felt were my best, worst, most influential and favorite projects of the last decade, continue reading!

The N64 was a pain and a half to modify, they break if you look at them cockeyed. The ColecoVision also sucked with its 3 different voltages including -5v for some reason. Ug. If you email me and never hear back, it’s because you’ve asked me to build one of these.

While I was well known before building it and even had a book out, it was the Xbox 360 Laptop that garnered me even more fans and acclaim. The original was a complete pain to build, but unlike the N64, worth it. I still continue to build Xbox 360 laptops to this day. Obviously I have to give credit to the original VCSp as well, without it I wouldn’t be here. It’s not the best thing I’ve ever made, but it’s the one I’d most glad I did.

The Commodore 64 laptop took forever but when it was finally done it was a beautiful recreation of a 1980’s product that – most importantly – also looks like it came from the 80’s. Today it rests in the Computer History Museum in Mountain View, CA (Silicon Valley) which is quite an honor considering they also have a Difference Engine replica as well as an original PDP-1 with Space War.

The 2009 model Atari 800 computer was a favorite for the same reason – it looked authentic, as well as being the computer I grew up with and still have today on my desk.

It didn’t get me the web traffic of an Xbox 360 laptop, but the custom Bill Paxton machine is far and away the most advanced thing I’ve ever built. It required wood working, art layout, sound design, programming, physics, electronics, embedded processors and mechanical engineering. It is really so far beyond anything else I’ve done before I’m not sure if people even realize it. Anyway, it was a blast to build and you haven’t seen the last of Ben Heck pinball!