Check it out, our first podcast of the year! There’s a video intro to this one, so it’s encoded in MP4 format as iPod video, though it will also play in normal QuickTime on a computer.

In this episode we do a wrap-up of the 3 next-gen consoles now that we’ve played them all. It was a close call to get it in there, only on New Year’s Eve Jones did finally get the play a PS3 for a bit so he could form some opinions on it. 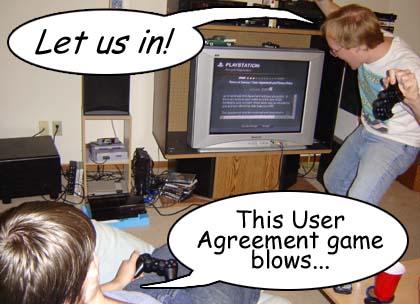 What will take up most of your time on the PS3…

So far we’ve both played Wii sports for several hours, I got about 5 hours into Zelda and also beat Resistance: Fall of Man on co-op. Ah yes and I played COD3 Wii as long as I could stomach it. With that under our belts it’s time for our impressions of the systems and suggestions to buyers. Personally, I vote “36DS” for the win (instead of the off-spoken but not as catchy or realistic “Wii60”) but we have a lot more to say than that so give it a listen.

Note: It might also be interesting to read my old “Future of Videogames” article from 2001, where I made predictions on the PS2/Xbox 1/Gamecube race. Granted I said Nintendo wouldn’t release another console, and thought the 360 would have a drive much bigger than 20 gigs (who didn’t?) but other than that many of the predictions are fairly accurate.