Resigned to the fact that people know me as Benheck I put it in this article’s title, to save other web sites a little time rewriting their links. How considerate of me. 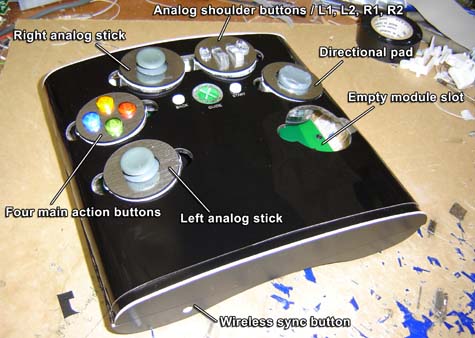 For a larger version with no captions click here.

Anyway, today I’m going to show you all the prototype for the new single handed controller I have designed and built, which I’ve been calling the “Access Controller”. This is actually the second prototype, a more refined version of the first. Alongside the new Elite-based Xbox 360 laptop (yes, it is coming) this has consumed most of time in recent months, hopefully explaining the drought of new projects.

Here’s the basic principle: You lay this controller on your leg, table or arm of a chair and all the buttons are available on the top surface. The gag is that each of the five sections is removable and you can plug them anywhere you want. This not only makes the controller work for both left and right handed use (simply mirror the layout) but it also allows the user to optimize the button placement on a game-by-game basis. Even if the user has partial use of both hands it should still be easier to work with than a standard controller. 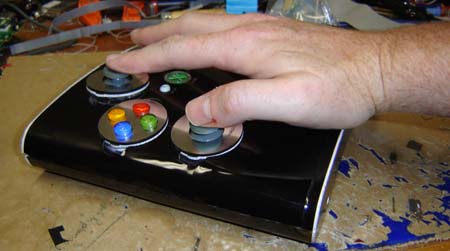 In this configuration example the thumb controls the left analog (player movement) where the forefinger is on the right analog. The middle or ring finger can press the analog shoulder buttons.

More details and photos follow below. This unit is currently in pre-production for manufacturing thanks to the folks at eDimensional.com and will first appear as a wireless model for the PS2/PS3, with an Xbox 360 version pending. If you’re interested in obtaining one of these or simply wish to express interest please email them directly at access@eDimensional.com. All other normal inquiries (photo permissions, interview requests, offers to send me free beer) can go to my usual address using the link over on the right. 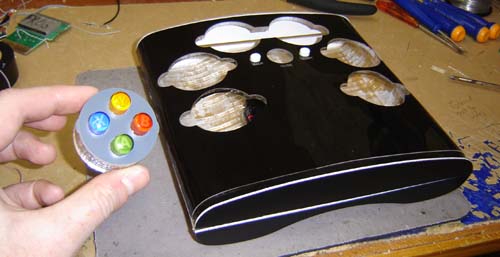 Here’s a shot of the controller casing before the guts were put in, along with a module. Each module is about 3/4″ thick with a pin header on the bottom. This header connects to a signal bus inside the main unit, which provides each module hole with every possible signal required by the game controller. This allows any module to be placed wherever the user wants and it will retain its original function.

End view of the controller, top. By designing something that would fit the curve of a leg, specifically the top of a thigh, it ended up being shaped like a big hip flask! This wasn’t the original intention (as I am not a fan of hard liquor) but as the controller came together it resembled something I couldn’t quite my finger on it… Until one day when it just hit me. Anyway, fun story for you all. 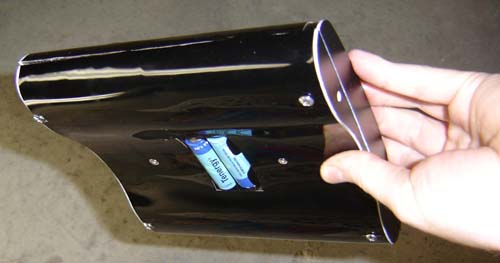 Bottom of the unit. The prototype was an Xbox 360 controller, and as mentioned the first production units will work on the PS2/PS3. The battery position may change, might be 3 instead of 2, but they’ll be in this general area, flush inside the case with a door.

Well that’s about all I have to say about this unit at this time, more details as they become available. Again if you’re interested in this project please email Michael directly using the link above.

Bonus fun story: One day, to test this unit, I sat out on my porch to play Uno on Xbox Live Arcade. I can see the TV in the living room through the sliding glass, so it’s quite doable. So I’m sitting there, drinking a beer with one hand, playing Uno using the controller with the other. But I didn’t put the headset jack in the prototype. So I go into an Uno room and some dude is like “Hey it’s Benheck!”, since, well, my gametag is Benheck. But I can’t say anything because I have no mic. So after a bit the guy is like “Oh, the great and might Benheck is too good to talk to us!” And then I get booted.

So the moral of the story is use your microphone on Uno or you’ll get booted. But fear not, if we do an Xbox version of this controller it WILL have the headset jack, so you’ll be good to go.