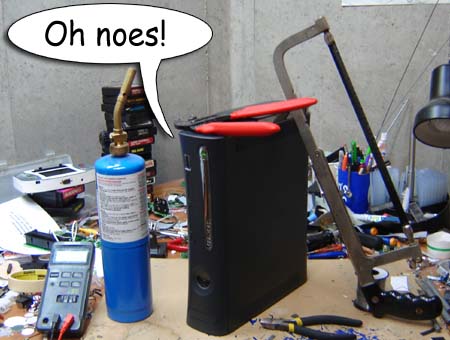 I’ve started the next Xbox 360 laptop and it’s going to use the Elite guts, allowing for a digital video connection among other things. I was very curious to see what changes, if any, were made inside the unit to account for the infamous “Red Ring of Death” problems. What I found was reassuring, at least for anyone buying the Elite, and provided some clues as to what might be happening in the defective units.

So for a guided tour in classic Ben style click below. I made the pictures nice and big because I personally can’t stand it when I try to find out what something looks like inside only to find postage-stamp sized pics that were probably taken with a 1997 Mavica.

The Elite came apart pretty much like any other 360 I’ve gotten my mitts on. The metal cage revealed by opening the bottom of the unit looked a little different, at least from what I can recall. More smaller holes instead of fewer large ones.

The bottom of the unit.

Face plate area is also the same, complete with “Don’t break the seal” thing telling MS if you’ve gone in for a swim.

The new 3 year warranty… voided in seconds with merely an X-Acto knife.

After remembering how the clasps in the rear are undone (simply insert a thin screwdriver into each of the slits) I popped open the first half of the case. Inside I found a bit of plastic dust, for lack of a better term. Never really seen anything like this before in a console. Perhaps it’s a new feature?

Comes with free plastic dust. Do not use near cribs or asthmatics.

Below is the unit thus far. Quite obvious is the new model DVD drive and the heat pipe “extension” for the GPU’s heat sink. I’ve seen some photos of these being added to fixed units, in France or something, but I guess they’re putting them in the Elite as well. Good show MS. Now get those 65nm IC’s all up in this. 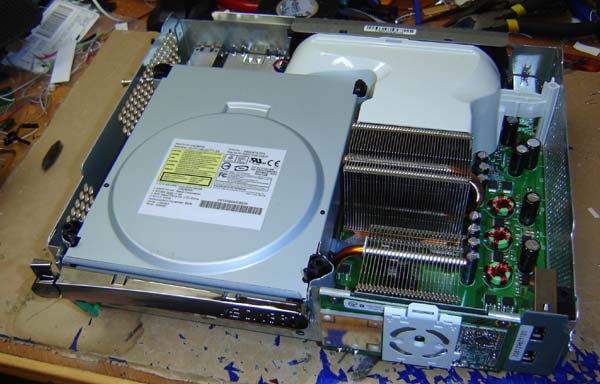 A BenQ drive… hm. I believe before their were either Hitachi LG or Toshiba. Perhaps this drive is quieter, well, it couldn’t be any louder I suppose. On that note, I don’t think the drive is loud because it’s a piece of junk or anything, it just spins the disc really fricking fast. I know, I’ve run them with the drive open before and it actually scared me. You’d half expect it to fly out of the drive and stick into the wall – better call Mythbusters and have them check it out with some ballistics gel. 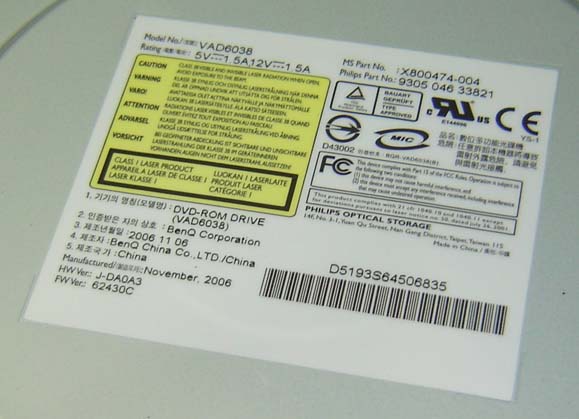 I don’t believe I’ve seen this brand of DVD-ROM in a 360 before.

The drive isn’t held in place by anything, just the case. I believe this is called “mechanical retention”. I guess whatever works. 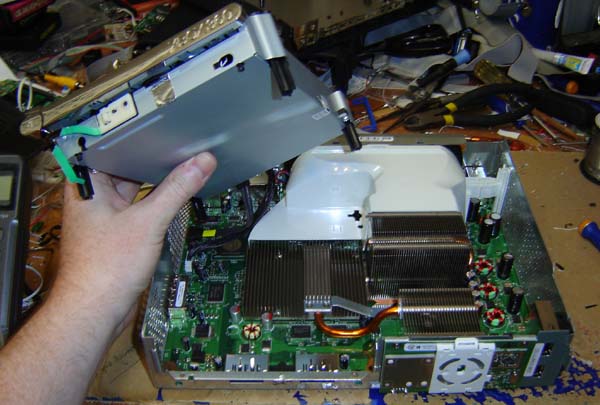 The DVD drive is held in place by mechanical retention / prayer. 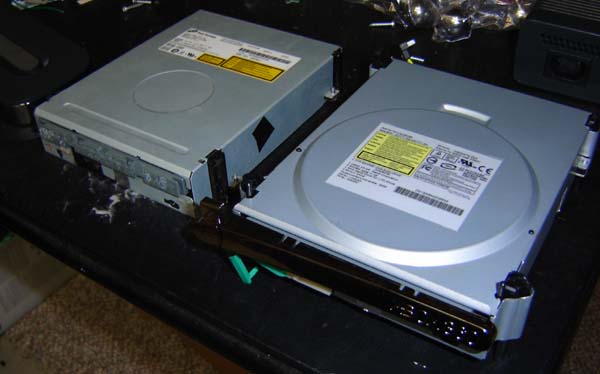 While the new drive looks thinner it actually isn’t when you include the top “UFO” portion.

Here’s a good view of the heat sink area. The CPU ‘sink is the same as before, because we all know the problem was with the GPU. Now not only is there a heat pipe going over the GPU but the material the heat sink is made out of seems different as well – it doesn’t feel like aluminum. (Originally it was a fairly generic aluminum heat sink that would honestly look more at home in a 486.) Maybe I can get NASA to scan it for me, or maybe who cares as long as it works? 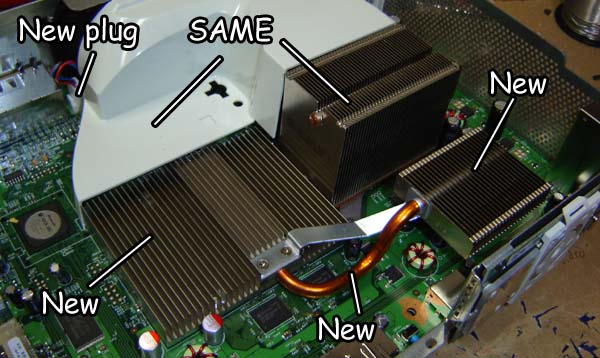 This photo also kind of shows how the XBox cooling is a bit weak. There’s no fans directly on any of the components, just 2 large ones at the back of the case and a “tunnel” to pull hot air from the chips. This would be akin to having only a rear fan on your PC and nothing on the CPU or graphics card.

In comparison the PS3, which I may or may not have opened and worked on, has a huge fan which pulls air from the rear and ejects it out the top (or right side if laid flat – is it just me or does the PS3 looks stupid sitting on end?) The air goes through a very large system of heat pipes and radiators along the way and is fairly similar to what’s probably on a Geo Metro. It’s very ridiculous looking when you first see it but then again we never hear about massive failures on the PS3 do we? Of course this could be because a mass of people haven’t bought them yet… But I digress, back to the 360 Elite:

Below is an overview of the motherboard. It’s very similar to the original but seems more optimized. Thinner capacitors have been used, which is probably why the board looks more bare. The HDMI/AV output plug is very weird… it has the same pin-out for the old A/V plug, but the through-hole connections are split in half on the bottom of the board. The first 15 pins are on one side, there’s a gap in the middle and then the remaining 15 pins are on the other side. This gap probably indicates where there’s a surface mount connection for the HDMI on the top of the board. Weird. 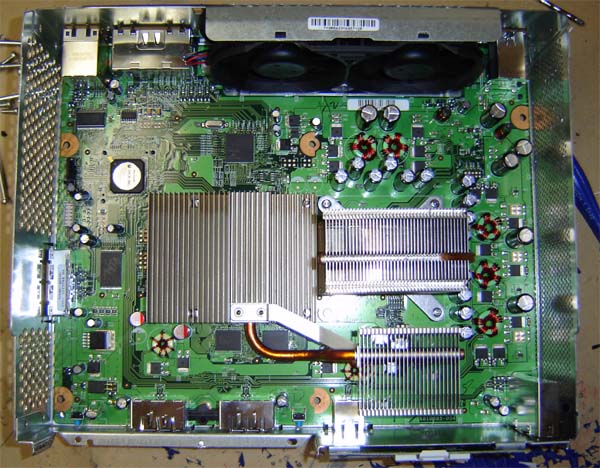 A top-down shot of the entire motherboard, with only some flash reflection wrecking it.

The Elite’s fan and a standard 360 fan. Pretty much the same, only the plug has changed. I did notice the fan seems to change speeds a little bit, but maybe I was imaging things. 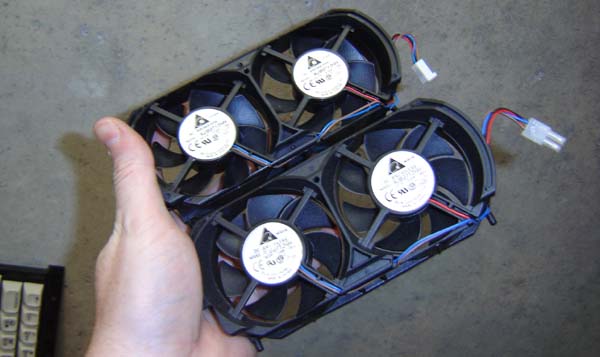 Can you tell a difference? Only the Shadow knows,because apparently Alex Baldwin is Chinese?

Below is an arrow indicating airflow. You can see how the heat that travels up the pipe from the GPU is intended to go into the mini radiator and be in the same “airflow line” as the CPU. It’s too bad there’s a pesky wall of metal and the Ring of Light blocking things to the right of this. Oh well, the 360 probably wouldn’t look very cool if the front of it was covered with holes. But it’s probably run cooler that way. 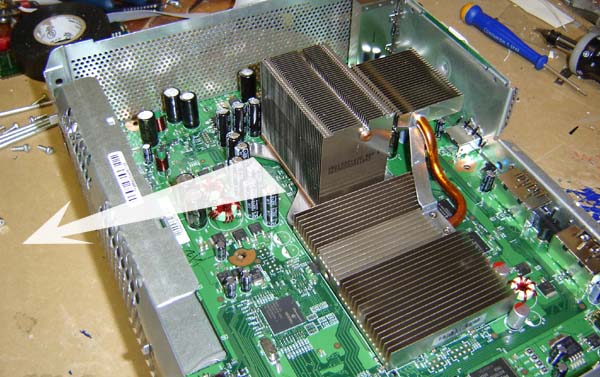 I then proceeded to pull off the heat sinks. Immediately I noticed that they had some wiggle to them, kind of like a PC heat sink usually does. The older 360’s heat sinks were quite well locked in place, and I’m not talking about the X clamps on the bottom either. The thermal paste on the older boxes was quite hard and you had to literally “break” the heat sink off the chips.

Twist, and then shout if you bust it.

True enough, once I pulled them off and had a look, the thermal paste on the heat sinks was much – for lack of a better word – GOOEY-ER than it used to be. Perhaps this allows for more expansion and thus a more consistent connection between the die and the heat sink. But I’m no brain scientist (for 50 points what movie was that term in?) so it’s hard for me to say for sure.

Here’s a side view of the GPU’s extended heat sink. It just barely clears the capacitors.

This thing looks cool, yet tacked on at the same time – much like Rachael Taylor’s character in Transformers.

On the bottom of the board we once again have the thermal pads under the memory that sink the heat into the RF shielding cage.

Thermal pads under the memory, same as before.

OK here’s the best surprise of all. Framing both the GPU and CPU are bits of hot-melt glue, or perhaps a type of epoxy resin. This is one of the oddest things I’ve seen in an electronic device, and I’ve opened an Intellivision before! 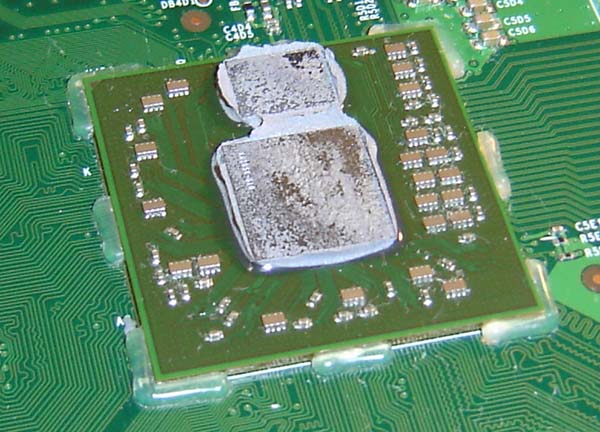 The GPU. Apparently Microsoft loves hot glue as much as I do. Not that I blame them…

This would be a good thing for you all to discuss in the comments. Does the glue keep the IC from drifting? Does it align the chip better for when it bakes, when they melt the BGA (ball grid array) solder points on the bottom? You’d think the chip couldn’t really drift once the unit is assembled as the heat sinks are clamped down onto it. But then again, these heat sinks aren’t held firmly in place by the thermal paste, so maybe drifting is some remote possibility and they’re hedging their bets with this glue. 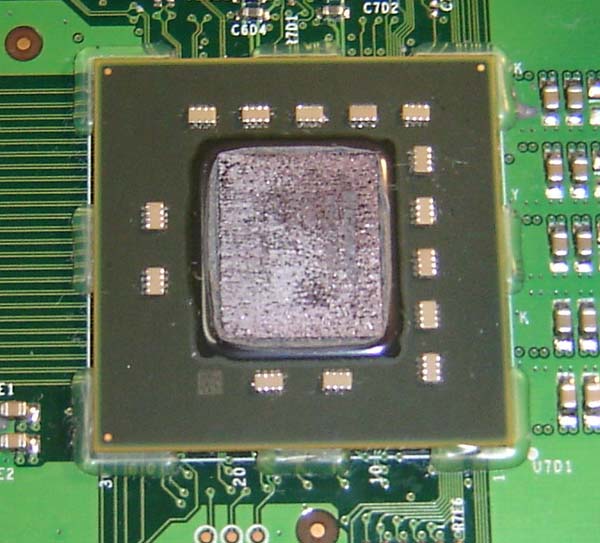 The CPU. More of this mystery glue.

It was time for me to test this glue substance. I pulled out all the stops and performed the most advanced analysis possible. First I did what any toddler would try and chewed on it. Its consistency was similar to hot glue but much stronger, so if it is hot melt it probably requires a higher temperature than the glue gun I bought for at Wal-Mart for 2 bucks. (Hopefully it melts at more heat than what the chip can pump out during a Gears of War marathon)

Regardless, I am quite impression by the precision CNC controlled gluing they have accomplished here and I wish I had a machine capable of that for my own. A hot glue robot – just think of the possibilities.

Near aerospace quality spectrometer testing being done on the glue, using the latest equipment in our state-of-the-art facility that doubles as a townhouse basement.

Well that’s about all I have to say about the Elite at this time. In short it looks like they’ve taken steps to improve the cooling of the GPU, even if the “glue frame” leaves us scratching our heads. If you’re on the fence about getting a 360 because of the “ring of death” reports, I’d say go for it anyway, especially if you can afford an Elite since it seems to have been updated. I wouldn’t be surprised if newer Cores and Premiums are improved as well. Now if only Microsoft would include built-in WiFi – maybe when the 65nm chips hit, which should also end the cooling problems for good – then they could truly stomp the PS3 into dust.