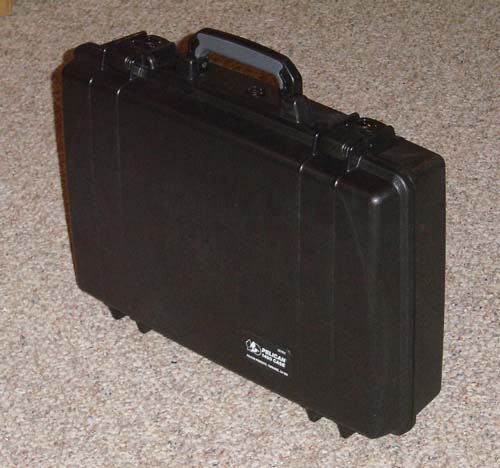 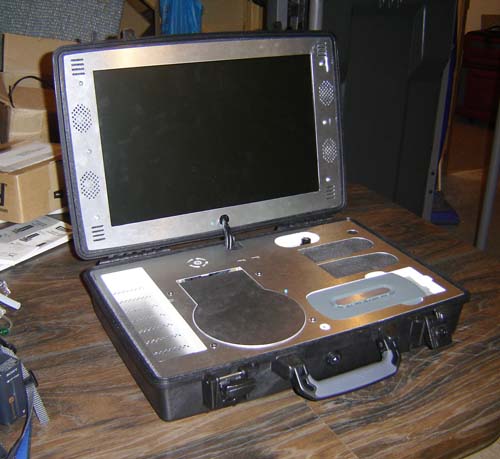 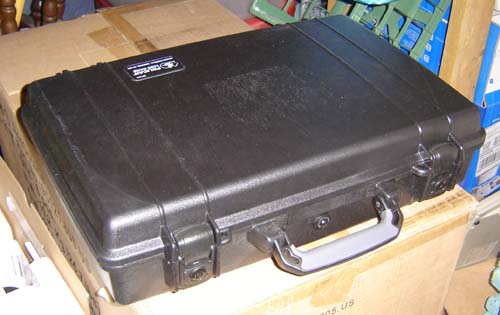 Here’s the briefcase at the beginning of the project. We tried a couple different sizes, this is the slightly smaller one. The first and most basic idea was to NOT drill holes through the surfaces of the case itself so it remains watertight/proof/whatever they claim it is. 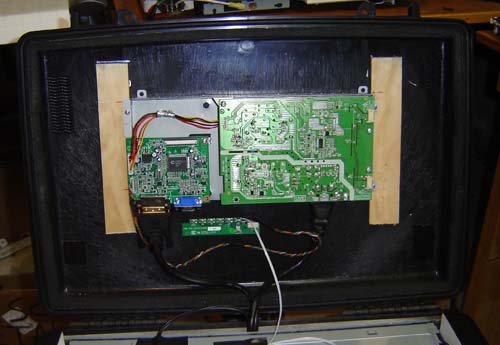 Inside the top half behind the screen. The LCD’s internals are mounted to the inside of the via a wooden frame (hey, it was the right thickness) and… wait for it… INDUSTRIAL STRENGTH VELCRO! No, really! It’s actually called “self-lock mushroom head” as it adheres to itself. 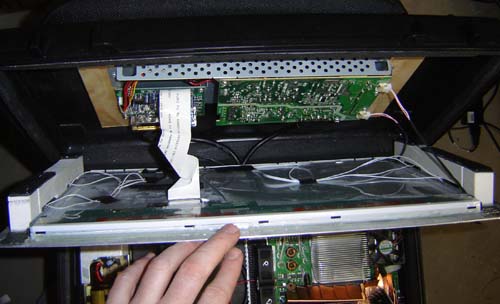 The white plastic on the sides is the mounting frame that Velcros (now a verb) to the inside of the lid. I had to figure out the inner curvature and was only about 30% off for a change!

Velcro is applied in small bits to the sanded inside surface of the case and then matching Velcro, mounted to a frame on either side of the LCD, latches onto that. So basically the LCD and metal frame Velcro into place, which sounds cheesy but this mushroom head stuff is really tough. It’s quite a chore pulling the screen back out again to make changes, but possible. I actually used less Velcro than originally planned because it was too difficult to pull out originally, and I always build things in such a way they can be taken apart. (despite what my hot-glue obsession might make you think) 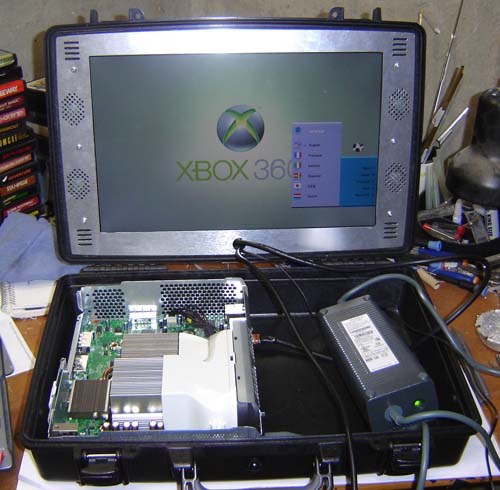 With the screen portion done I tested the basic idea of fitting a 360 inside the bottom of the unit. Seems to fit. The LCD is a newer version of the kind I’ve been using in my last few Xbox 360 laptops, it’s still a Gateway but now the resolution is slightly higher.

I still like the older 1280×720’s best, been collecting those before they get too rare. 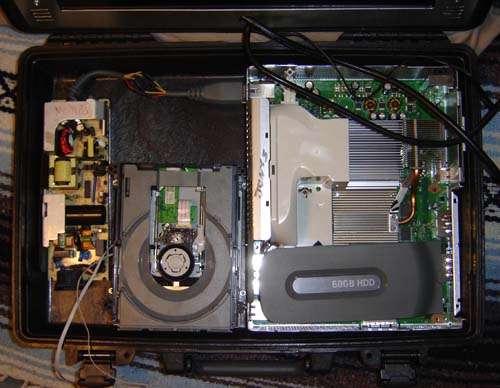 The next step was to take the XBox apart further and see how best to mount the DVD drive and power supply. This configuration looks like it will work, and have some extra “cord room” under the DVD drive itself. 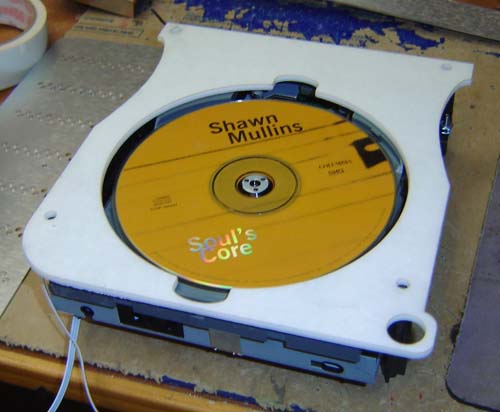 To keep all of the components inside the case the DVD drive needed to be modified. This was done by disabling the tray eject mechanism, designing a PS1-style disc lid and finally installing new limit switches to detect the position of the new door (open or closed).

My old Shawn Mullins CD is the sacrificial lamb for this first reworked DVD drive tests – my apologies to the person who bought it for me back in the day. 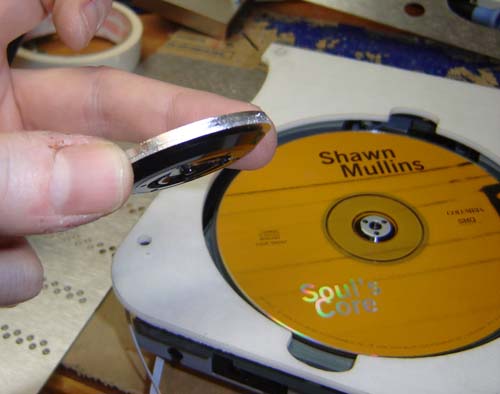 Here is the disc holding magnet, built into a new aluminum ring retainer. I had to make all this stuff quite accurate since the Xbox spins the DVD at approximately 75% the speed of light. This is actually the first time I’ve reworked a drive in such a way since the infamous MGDpc. 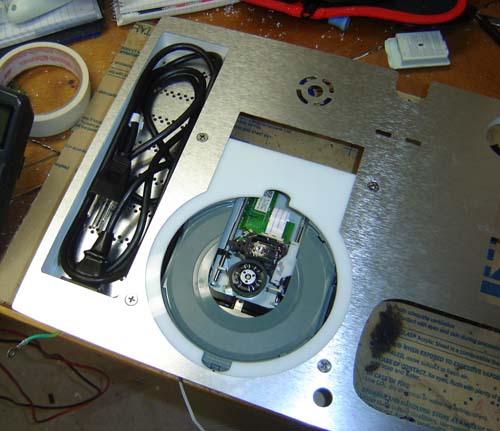 The DVD drive in the bottom metal frame. So far so good… 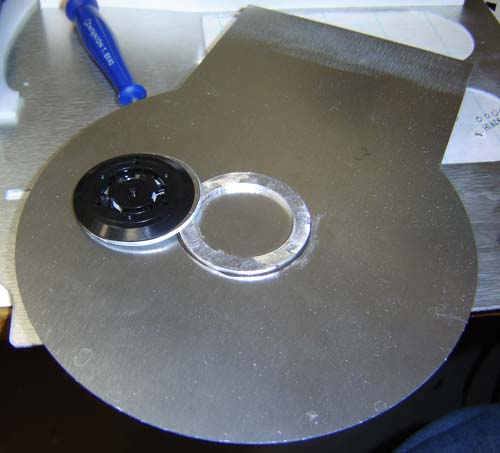 The inside of the drive lid, with the disc magnet retainer. I was pretty worried about getting this right, because the following could go wrong: 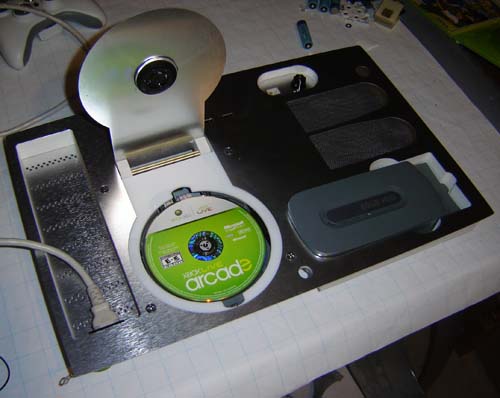 In the end it worked out OK – there was a bit of scraping, but this was solved by putting some .020″ spacers on either side the disc on top of the white frame. 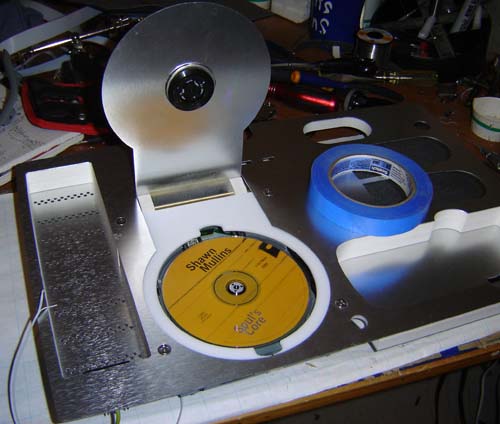 Maybe I can destroy Shawn this time… 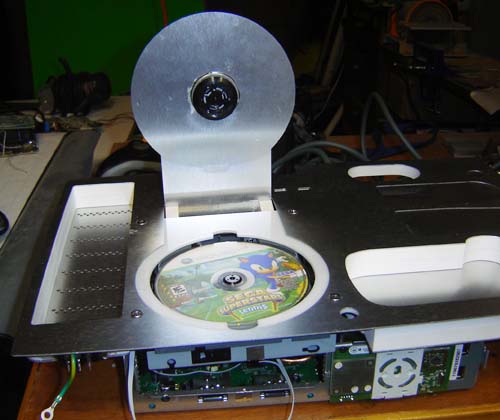 Testing the drive on the actual Xbox.

I tried to motorize the lid but I was unable to. Thus the disc must be changed with the Xbox powered off. This is unfortunate, but since I consider this unit a proof-of-concept prototype I’ll let it go for now. “Next time, baby!”, to quote Terrence Howard’s rather-ironic statement in Iron Man. 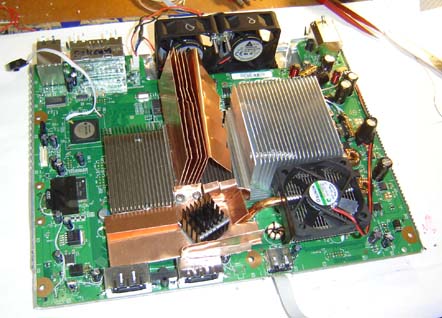 Here is the Xbox 360 motherboard used with this project. Since I’ve been working on this for a few months this is still the older Falcon board. I thought about using one of my Jaspers but the mods on the Falcon DVD had already been done and as many of you know the DVD drive is keyed to the motherboard so I can’t mix and match.

Anyway, having a bit of room to work with, I slapped a bunch of copper plating on top of the GPU, as well as some just above the heatpipe, a heat sink on that, and a 50x50x10mm fan on the GPU’s external radiator.

Two main fans blow air across the GPU and CPU in place of the stock fans. (I don’t know why I always replace the fans since they’re one of the more expensive parts to re-buy) The basic idea is to get the hot air out of the case, blow it across and then up. 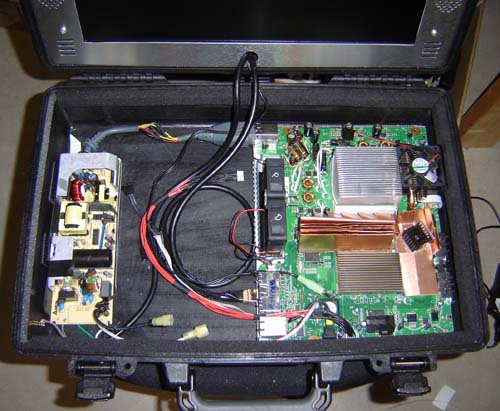 Installing the parts in the bottom half of the case. The super-Velcro was used again, in fact, I made damn sure I had all the connections done to the motherboard that I needed because I’m not sure it actually could be removed without damage. Seriously, buy some of it, it’s awesome. 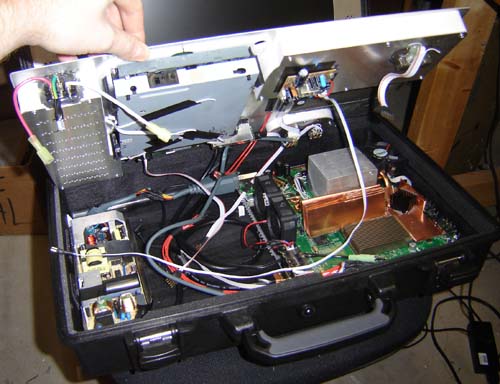 The bottom frame getting attached to the internals. Kind of looks like a mess, but the only things interconnected are SATA DVD, DVD power, AC power plug, Speaker out, HDMI out, Speaker In, Speaker Amp power, USB port, Ring of Light/Death, Ethernet and SATA hard drive. OK I guess that is a lot, but really, didn’t seem that bad to me.

To all aspiring modders – buy and use a lot of headers and receptacles. It takes longer and costs more than just wiring crap together, but when you have to pull a project apart for the zillionth time while troubleshooting you’ll thank yourself. 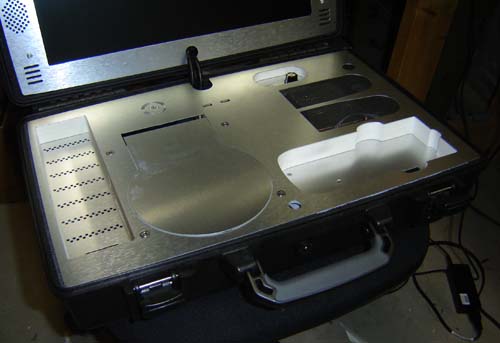 Thank God it all fit! I mean, I had no doubt that it would! 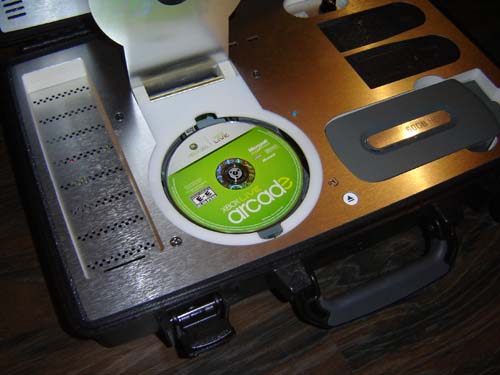 Time for a rousing game of Pac-Man. 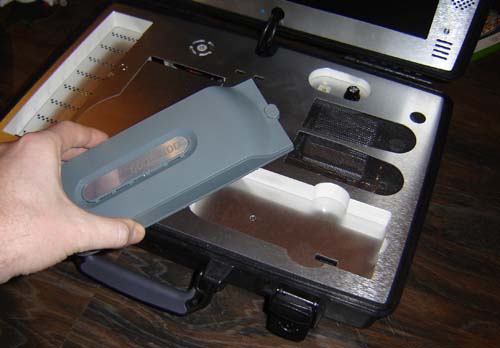 As with the new Xbox 360 laptop the hard drive is removable, however this model does not have memory card access… 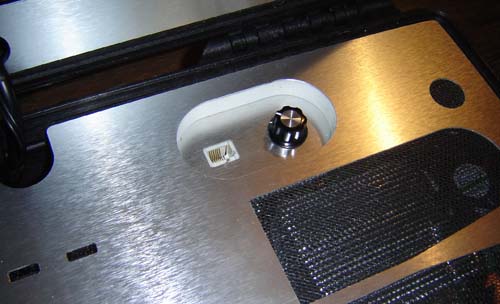 …but hey, there’s an Ethernet port finally! Don’t know why I didn’t do these before, the jack costs a whopping 2 bucks at Menards. This unit does not have a Wi-Fi module at present. 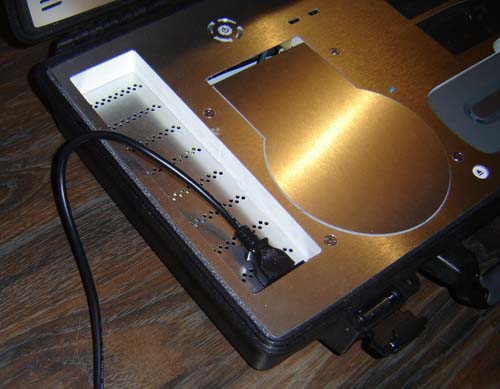 You can even take the power cord with you. I wish there would have been room to stow a controller, but it was not to be. 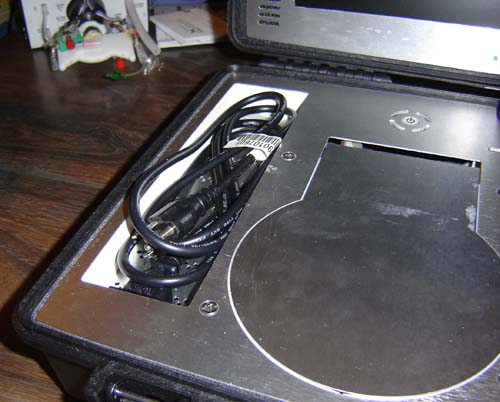 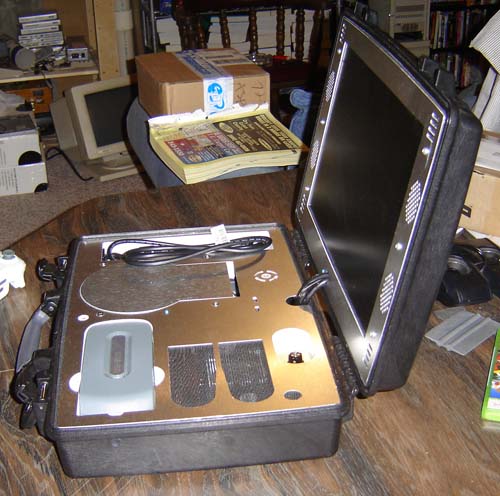 End view of the unit opened. All of the components in the lower half are flush with the surface so the unit can actually close 🙂 Note the sneaky design feature – the protruding screws around the screen match up to convenient “depressions” on the lower half of the case – specifically the cord compartment, heat sink vents (note the pointless small circular one?) and hard drive slot.